Baby (by Smoke)
Busta (by Ryder)

Co-leader of the Grove Street Families

Hanging out with Sweet.

Avenge the death of his mother.

Destroy the drug market and the Loco Syndicate.
Free his brother Sweet from prison.
Hunt down and kill Big Smoke and Ryder for their betrayal.
Destroy C.R.A.S.H.
Avenge his family by killing Frank Tenpenny and Eddie Pulaski (all succeeded).

Carl Johnson, better known by name as CJ, is the main protagonist of the 2004 video game Grand Theft Auto: San Andreas. CJ is a co-leader of the "Grove Street Families" (GSF), along with his brother, Sean "Sweet" Johnson, GSF is a criminal gang dedicated to the alleged marijuana trafficking, arms smuggling, and bank robberies. Sweet suggested that CJ was born in the Johnson House, a two-floor home in Grove Street, a cul-de-sac in Ganton, Los Santos, which was owned by the Johnson family matriarch, Beverly Johnson. Carl is the second child of a family of four (in birth order): Sean, Carl, Kendl, and Brian.

Five years prior to the beginning of the game, CJ left San Andreas and took up work in Liberty City out of discontent for the degrading situation of Los Santos, which happened shortly after the death of Brian Johnson and Sweet blaming CJ for it. There, in Liberty City, he earned his living working for the Leone Family Mafia, doing work for Don Salvatore Leone's son Joey. As the game opens, CJ arrives back in Los Santos following news of his mother Beverly's death in a drive-by shooting by the rival Ballas gang, only to be located by corrupt Los Santos Police Department (LSPD) C.R.A.S.H. (Community Resources Against Street Hoodlums) task force officers Frank Tenpenny, Eddie Pulaski, and Jimmy Hernandez, who immediately framed him for their recent murder of a fellow police officer, Ralph Pendlebury, who threatened to expose their illegal racketeering to Internal Affairs.

Carl Johnson was born in the crime-ridden Los Santos suburb of Ganton in 1968. He had three siblings, Sean "Sweet", Kendl and Brian. At some point, his father left the family. At some point Sweet, CJ, and Brian befriended Lance 'Ryder' Wilson and Melvin 'Big Smoke' Harris and joined the gang known as the Grove Street Families. Two decades later in 1987, Brian was killed and Carl was blamed for his death. After that, he moved to Liberty City and did petty crimes and car thefts for the Leone Family until 1992 when his mother Beverly accidentally got killed in a drive-by shooting meant to take out Sweet. Learning of his mom's death over the phone from Sweet and Kendl, CJ makes plans to return home for his mother's funeral.

After arriving in Los Santos, Carl barely departs Los Santos International Airport to return to Ganton when he was kidnapped by members of the LSPD (Los Santos Police Department) CRASH (Community Resources Against Street Hoodlums) task force and was framed for the murder of a police officer, Ralph Pendlebury, who had threatened to report the illegal activities of CRASH to Internal Affairs, forcing them to silence him to maintain their activities over turning in their badges for corruption of duty. He returned to Grove Street and began to work for the Grove Street Families again, having learned that, while he was gone, the GSF fractured as the Seville Boulevard and Temple Drive Families split off from Grove Street to fend for themselves. He also encountered a member of the Los Santos Varrios Los Aztecas Mexican gang named Cesar Vialpando, his sister Kendl's boyfriend.

Thanks to Carl's efforts with trying to rebuild the GSF, the Seville Boulevard and Temple Drive Families agree to reunite, but the meeting to finalize the reunion is nearly ruined when the Jefferson Motel, where the meeting was being held, is raided by LSPD SWAT, but Carl and Sweet escape thanks to help from Big Smoke and Ryder. While on a mission to weaken the Ballas, Carl and Sweet discovered that Big Smoke and Ryder were working with Frank Tenpenny, the leader of CRASH as well as the Ballas, thanks to Cesar revealing to CJ that Tenpenny, Pulaski, Smoke, and Ryder were with the Ballas and the green Sabre that was seen performing the drive-by that killed Beverly, meaning they sold out the GSF in an attempt to destroy the gang and ensure the Ballas reigned supreme in Los Santos alongside the Los Santos Vagos and flooded the streets with drugs, something the Grove Street Families were deeply against doing themselves.

Carl then helped Sweet fight with Ballas members, but was arrested by Tenpenny and exiled to the vast countryside, while Sweet was injured during the firefight between the GSF and Ballas at the Mulholland Intersection and was incarcerated and treated for his wounds. Tenpenny makes it clear to CJ to stay away from Los Santos, Big Smoke, and especially CRASH, or Sweet will be transferred to a Balla cell block to be possibly murdered by the rival gang members incarcerated there.

Betrayed by Big Smoke and Ryder

During his time in the wilderness, Smoke, Ryder, and the Ballas unleash a wave of drugs onto the city. He befriends an aging hippie with a marijuana farm named the Truth and works with him for a while.

He also forms a partnership with Cesar's deranged cousin, Catalina and robs "soft targets" with her until Carl wins a race against her new boyfriend, Claude. He wins a run-down San Fierro garage from Claude and begins fixing the business up.

He also begins working for a blind San Fierro Triad leader nicknamed 'Woozie'. He and Cesar succeed in killing off Ryder during a meet between the Ballas and San Fierro Rifa with support from Woozie's Triads, also taking out Rifa leader T-Bone Mendez in the process as Carl takes out the Loco Syndicate, the group responsible for flooding Los Santos with drugs for the Ballas. The surviving member of the Loco Syndicate, a corrupt government agent named Mike Toreno, blackmails Carl into working with him, in return offering to release Sweet from prison once he's fully recovered from his wounds.

Later Carl ventures to the desert town of Las Venturas where he becomes Woozie's partner at his casino called the Four Dragons Casino. He also helps Woozie to get rid of the various mafia gangs that are causing him problems and infiltrate Salvatore Leone's gang.

After some odd-jobs and a brief trip back to Liberty City, Carl performs a daring heist on a casino Leone owns, Caligula's Palace. He also becomes the manager of the disgraced rapper Madd Dogg after thwarting a suicide attempt Madd Dogg attempted after CJ had been responsible for ruining Madd Dogg's career to help a homie named OG Loc get his own rapping career started.

After Carl returned to Los Santos, he first went to the prison to pick up his brother Sweet. After Tenpenny was announced innocent, riots began all over Los Santos as people were furious that Tenpenny had been acquitted of his crimes. Carl then takes control over most of the streets of Los Santos, slaughtering any Ballas or Vagos that get in his way of putting Grove Street in control of the city as the dominant street gang. Sweet then finds out where Big Smoke is hiding, then both he and Carl go pay him a visit at his crack palace in East Los Santos, on the border between Vagos and Balla territory.

After Carl takes Smoke down, Tenpenny then appeared and tells Carl his plan is to escape with the money. Carl and Sweet then chase down Tenpenny in a high-speed chase, which leads to the death of the corrupted officer, ending the riots once word of Tenpenny seeing justice via his death becomes public knowledge. After everything is over, Carl and his friends get their first Golden Record with Madd Dogg.

After the final mission, Kendl asks Carl where he's going. Carl responds with saying he's just going to hang out in the streets. He then gets a call from Catalina while having sex with Claude, witch leads to Carl calling her sick. Carl can then go roam the streets like all other GTA protagonists.

Carl Johnson is a pragmatic and quite charismatic gang leader (though his charisma can be enhanced throughout the game). He can be extremely violent, ruthless, and destructive when necessary. He manages his problems in a boss-like fashion, which often involves brutal shootings. That being said, most of his victims also tried to murder CJ as well. He has no problems hunting down or wiping out anyone that gets in his way - especially Ballas members or policemen, or committing petty crimes such as robbing houses and various places. The only characters he genuinely fears are those in a position of authority such as Frank Tenpenny, or utter psychopaths such as Catalina.

On the other hand, unlike his two predecessors (Claude & Tommy Vercetti), who were hardened criminals with little remorse, Carl Johnson displays much more decency and empathy. He is overprotective of his gang and his brother Sweet. He also displayed regrets immediately after defeating Big Smoke, despite the fact that Big Smoke coldly betrayed him and left him for dead somewhere in the countryside.

Some even question his intelligence, though Carl Johnson proved many times to be a skilled manager and strategist. Carl even uses manipulation and deception in order to gain what he wants, an example is when he successfully tricked Millie into giving him the access key necessary to organize the raid of the Caligula.

Unlike Ryder and Big Smoke, Carl Johnson is not interested in drugs and actually despises them. This is shown multiple times throughout the game, such as when he beat a crackhead attempting to give Sweet some PCP. Despite this, however, CJ seems to get along pretty well with the Truth, who is a drug-addict and dealer. He also holds a grudge against the C.R.A.S.H. - especially Tenpenny - and the cops in general, often nicknaming them "bribe-taking assholes" or "bitches". 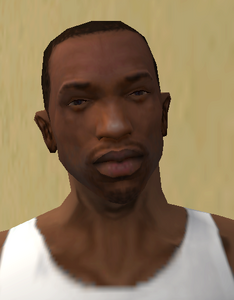