Carley is an original character who first appeared in Telltale Games' The Walking Dead: Season One. Carley is a quick-thinking regional news reporter from Atlanta. A skilled shooter, Carley serves as one of the main defenders of the group and the love interest of the main protagonist of the video game, Lee Everett.

Compared to Doug, whose personality within the group is more neutral and passive, Carley plays a more active role in group discussion and isn't afraid to speak her mind. Between them, Carley's storyline offers players more drama during group discussions and a possible (though temporary) love interest for Lee, although saving Doug would provide players with an equally interesting plot to enjoy.

Carley is first introduced as a no-nonsense reporter, who, along with Glenn, chooses to save Lee, Clementine, Kenny, Katjaa, and Duck upon their arrival in Macon. Having spent her time in war-zones as a correspondent, she presumably acquired basic knowledge of firearms and survival tactics that allows her to hold out during the outbreak. Her excellent gun handling is often remarked by Kenny to be a "dead eye accuracy".

Like the rest of the group, she cares about their welfare. Although unlike Lilly or Larry who she claims have no "humanity", Carley is interested in saving every survivor that her group comes across. In fact, she was one of the earlier members in the group to know about Lee's past and goes out to warn him about it, stating that his past better not be detrimental to the group.

She is, however, a respectful and thoughtful individual as well. When Lee chooses to admit his past to her, she reassures him that she'll keep it to herself, although later on she urges Lee to reveal his past to the group. During Lee's showdown with Andrew in the farm, punching Andrew long enough will trigger Carley's appearance to stop him from inflicting any further injuries, saying that he'd "had enough".

Regardless of who Lee saves in "A New Day", both Carley and Doug will display immense loyalty to Lee for the remainder of the game, and later on towards Ben Paul. Both will express interest in having Lee as the group's leader although interacting with Carley will trigger the topic about his past. Her strong relationship with Ben would later lead her to defend her fellow friend when he is accused of being the traitor in the group by Lilly.

Due to her active participation, Carley is blunt about her opinions and isn't afraid of defending her comrades if threatened. This is shown when she reprimands Lilly's paranoid accusations towards Ben and says they are a cover for her fear. However, it is due to this very trait which unfortunately earned her own untimely demise under the hands of Lilly (who was close to an emotional breaking point). Ironically, the very person whom she defended (Ben) was the cause of her death after it is revealed that he was the traitor.

Before her untimely death, Carley's relationship with Lee developed to the point where she showed interest in him. Depending on the choices, Lee can choose to reciprocate her feelings as she gives Lee a kiss on the cheek. The romance was possibly a response from Telltale Game's staff towards fan's question about a Carley-Lee relationship. The relationship would have been certainly explored if it weren't for her death.

Carley and Doug's deaths continued to affect Lee, Ben, and - to a minimal extent - the rest of the group. 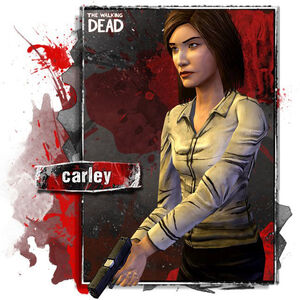