He can talk to dogs, run very fast, and is pretty good at Tourney.

Carlos De Vil is the son of Cruella de Vil and one of the tritagonists of Descendants.

He was portrayed and voiced by the late Cameron Boyce, who also portrays Luke Ross in Jessie and voices Jake in Jake and the Never Land Pirates. He also plays Cal from the late film Runt.

He used to have a severe fear of dogs (Instilled in him by his mother) until he learned that dogs aren't really bad by befriending a little dog named Dude.

He also learns that he is able to run quite fast when the occasion calls for it, and uses that skill to perform well on Auradon Prep's Tourney team.

While he started as a self- described "lowlife hood," Carlos eventually joins his friends (And fellow villain- kids) Mal, Evie, and Jay in reforming and becoming good.

Ben, announces that his first proclamation is to give four selected children from the Isle of the Lost the chance to live in Auradon, away from the influence of their villainous parents: Carlos, son of Cruella de Vil; Jay, son of Jafar; Evie, daughter of the Evil Queen; and Mal, daughter of Maleficent. On the island, Maleficent instructs the quartet to steal the Fairy Godmother's magic wand to release the barrier so she can take over Auradon.

Traveling to Auradon Prep, the four meet Ben and his self-proclaimed girlfriend Audrey, daughter of Princess Aurora. They also meet the Fairy Godmother, the school's headmistress. Evie uses her mother's pocket-sized magic mirror to locate the wand in a nearby museum, and Mal uses her mother's spinning wheel from the museum to put the security guard to sleep, but they fail to steal the wand due to a barrier around it. After learning that the Fairy Godmother will use the wand at Ben's coronation, the four wait it out by attending classes, but start to fit in with the students.

Carlos overcomes his fear of dogs by befriending the school's dog, Dude. During the school's family day, the villains' children are ostracized after an encounter with Audrey's grandmother, Queen Leah, saying Maleficent's curse was the reason she missed Aurora's childhood, prompting an argument that drives Mal to end the beauty spell she used on Jane. While Ben tries to reassure them that everything will be okay after the coronation, Doug tries to remain friendly towards Evie, but Chad forces him to distance himself from her. Mal recognizes that she and her friends found happiness in Auradon and they choose to be good.

Maleficent crashes the ceremony, freezing everyone except herself and the four children. When they defy her, Maleficent transforms into a dragon. Mal and her friends use a counterspell, turning Maleficent into a lizard based on the amount of love in her heart. Mal returns the Fairy Godmother her wand as she unfreezes everyone and tells her not to be hard on Jane. While the villains watch the celebration from afar, Auradon Prep's students party through the night. Mal's eyes turn green as she addresses the audience, telling them the story is not over yet.

Mal confides her issues in her friends Evie, Carlos and Jay, but they are content with their new lives in Auradon and do not wish to return to the Isle of the Lost. Carlos, wishing to ask Jane to the upcoming Cotillion dance, turns to Mal for help with honesty. Mal gives him a sweet that will make him speak the truth, but his dog Dude eats it, magically speaking the blunt truth in English.

Mal's group return, handing over the fake wand in exchange for Ben, but Uma realizes the forgery. The group flee back to Auradon, but Mal and Ben's relationship is still rocky. The villains' children come to terms that they cannot run from their pasts and agree to be honest with themselves and each other. Carlos confesses to Jane but struggles a little bit, while Jay appoints Lonnie as the captain of his team. 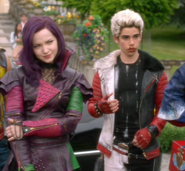