Save Jill Valentine and escape from Raccoon City with her (All Succeeded).

Military Hero
Carlos Oliveira is the deuteragonist from Resident Evil 3: Nemesis as well as its 2020 remake.

He met Jill Valentine at Raccoon City, they have joined the forces for escape from Raccoon City and defeat Nemesis.

In the remake, he is voiced by Jeff Schine, who also voices Javier García.

he was played oded fehr in the movies.

When news of the t-Virus outbreak hit, Carlos was sent in with a company of 120 men to the heart of the disaster zone, being told that their objective was the rescuing of any survivors. However, in the heat of battle, Carlos was forced to fight for his own life. He managed to acquire a radio (possibly from his Unit's communications officer), where he transmitted a plea for help. Former S.T.A.R.S. member Jill Valentine heard the transmission in the Raccoon City Police Department.

However, by the time she met Carlos, he was only one of as little as three Delta Platoon members. The other two, Delta Platoon leader; Cpt. Mikhail Victor and B Squad member Sgt. Nikolai Zinoviev, had taken cover in a train, while Carlos searched for help.

Jill was reluctant to trust Carlos, due to his affiliation with Umbrella and macho attitude, but she quickly learned that Carlos was almost unaware of the company's nefarious deeds and was simply an expendable pawn to them. The two teamed up and managed to escape the Downtown area of the city and into the St. Michael Clock Tower, where Jill fought an experimental Tyrant known as the Nemesis-T Type.

Carlos attempted to help Jill in battling Nemesis but the Tyrant overpowered him. As a result of the battle, Jill became infected with the t-Virus after being struck by one of the Nemesis' tentacles. Carlos regained consciousness and saw Jill fall unconscious after the battle. He brought the unconscious Jill inside the chapel of the clock tower to take refuge.

Remaining at the Clock Tower afterwards, Carlos guarded Jill, who was still unconscious for the next two days, in the chapel from the Nemesis. He might have wandered inside the Clock Tower and hoped for Jill's recovery on that day although this was uncertain.

Carlos was told by Jill, who finally regained consciousness, that she was infected with the virus. He forced himself to find the cure to prevent her from becoming one of the undead. Carlos was also asked by Jill that if she turned into a zombie then he should not hesitate to kill her. Carlos went to the Raccoon General Hospital and managed to prepare a vaccine to save Jill from infection. He also spotted Nikolai inside the Hospital only to find that he was a traitor that had killed most of his fellow U.B.C.S members. Carlos also discovers that Nikolai also planned to kill Jill. He managed to escape Raccoon General Hospital after the building had been completely demolished by a bomb set by Nikolai in order to destroy all the vaccines. He returned to the chapel meeting the still alive Nemesis (mutated into his second form) and gave Jill the vaccine. Carlos told to Jill that Nikolai was still alive and warned her not to trust him because he was on his way to kill her. Afterwards, he proceeded to an abandoned Umbrella facility near Raccoon Park. Carlos managed to contact Jill and warned her about the presence of the thermobaric missile that would strike the city and destroy everything. While searching for a possible escape plan, Carlos learned that there was a chopper headed towards the factory that wanted to rescue them. After Jill defeated the Nemesis in a final battle and went up to the balcony, Carlos showed up and told Jill that there was a helicopter waiting, but she did not believe him because she thought there was no way for them to escape. He signaled the awaiting helicopter and it was ready to pick them up for safety. Luckily, Carlos and Jill finally escaped Raccoon City via helicopter and Jill was surprised that the one who piloted the helicopter was none other than Barry Burton. They witnessed the annihilation of Raccoon City as it was destroyed by the missile. 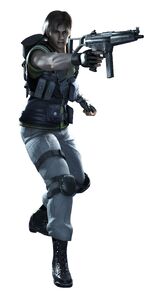 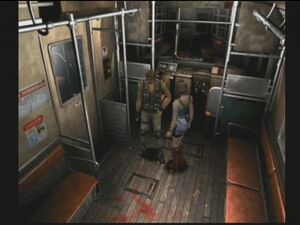 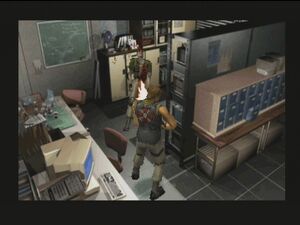 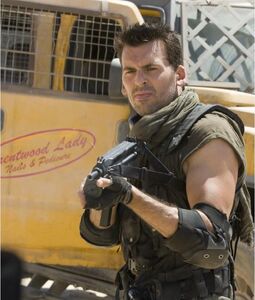 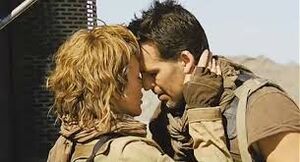 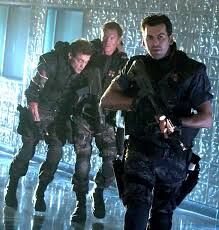 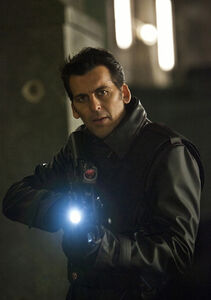 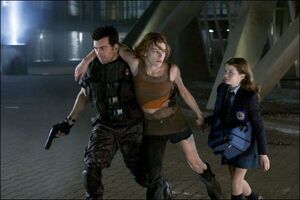 Carlos with Alice and Angela in Resident Evil: Apocalypse
Add a photo to this gallery

Retrieved from "https://hero.fandom.com/wiki/Carlos_Oliveira?oldid=2047360"
Community content is available under CC-BY-SA unless otherwise noted.