The Magic School Bus in the Time of the Dinosaurs (1994)

Carlos Ramón(born February 3rd, 1985) is one of the main protagonists in the animated children's series The Magic School Bus. He is the class clown who is always known for making a pun or joke about the situation they are in. He is a hands-on learner, preferring to invent different devices rather than learn from a book, making him something of a foil to Dorothy Ann. He tends to tell bad jokes and puns, which causes the class to groan "Carlos!" in annoyance.

Carlos unintentionally drives Phoebe to start her own activist group called Students Against Desert Scarcity in "All Dried Up" after he goes on about how any animals in the desert would be suffering in the heat and from a lack of food and water. He tries to convince her through the whole trip that the animals are doing fine without her, but it's not until after a flood that she realizes he was right. In "In the Haunted House," he builds an instrument for the class' concert at the Sound Museum, but unfortunately, it sounds "ploopy."

Once he figures out what's making it sound that way, he makes it sound right. He leads the rest of the class in baking a cake for Ms. Frizzle in " Gets Ready, Set, Dough." He and Phoebe butt heads once again, somewhat, in "Goes to Seed." He's irritated with her for not having a plant in her class garden plot, as they're supposed to get their photo taken to be on the cover of Plant It! magazine (and "get famous"). He is also irritated with her into embarrassed about being seen by her old teacher Mr. Seedplot.

Upon hearing that there's a new island that had yet to be discovered, Carlos and Dorothy Ann race to sees whom would discovers it first ("Blows Its Top"). He's convinced in "The Busasaurus" that dinosaurs are "the biggest and meanest animals that ever lived!" He'd love to see the "fighting and slaughtering," but he changes his tune when Arnold and Phoebe are gone, now paranoid that "the dinos did them in!" His brother, Mikey, makes his first appearance in "Getting Energized" when he calls him to help the class get their ride at the fair to work.

Carlos eventually revealing he has arachnophobia in "Spins a Web," which Phoebe helps him to be overcome. He butts heads with Dorothy Ann (again) in "Makes a Rainbow" when they get into a fight over color. Carlos gets his another chance to debate in town hall over the proposal of a new mega mall in "Gets Swamped." He wants to argue for the mall, but he loses a coin toss to Janet, so now he has to argue against the mall. In "Makes a Stink," he tries to find the perfect scent for the class to present to Flora Whiff, a smell expert, but the mothball he brings is accidentally crushed by Janet.

Mikey makes his second appearance in "Gets Programed" when Carlos asks for his help getting Mr. Rhule's new computer set up.

Carlos is a Hispanic boy with black hair and brown eyes, in Rides Again he has dark brown hair. 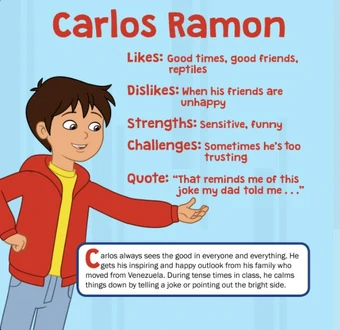