No information
Carol (possible full name Carol Kincaid) is the mother of K.O. She acts as a secondary character in the series. She is also the owner of the Fitness Dojo at Lakewood Plaza Turbo.

In the past, she was a member of the superhero team P.O.I.N.T. under the alias of Silver Spark, along with El-Bow and Rippy Roo.

He was voiced by Kate Flannery, who also voice as Barb Miller from Steven Universe.

Carol is a tall woman with a curved but athletic build. As his mother, Carol shares many traits with K.O., like large expressive eyes, a short nose, and tanned skin. She has a prominent gap in her teeth. She has short, wavy blond hair that is held up with a red headband. Her dojo outfit consists of a sleeveless violet and blue bodysuit with two pockets on the front legs, white ankle boots, and red gloves. Carol also appears with an ear microphone under her hair.

As Silver Spark, her outfit was more revealing, consisting of a reflective silver leotard, a purple cloth wrapped around her waist, transparent black tights with purple kneecaps, silver reflective ankle boots, cuffs on her wrists of the same color, and a much longer and messier hairdo.

She can be a bit rough with K.O., as she had her students literally attack him with love (hugs, kisses, etc.) However, K.O. doesn't seem at all hurt by this and only finds it to be an annoyance. She also seems to be quite the authority figure to K.O., as she seems to have him figure out the lesson he must learn, instead of telling him directly, which wouldn't help him learn anything.

Aside of this, Carol has a friendly and educated attitude among the other heroes of the plaza. She will get enraged if someone dares to insult or bother her son.

When she belonged to P.O.I.N.T., Carol had a personality quite similar to K.O.'s when he got hired in Gar's Bodega. She was very optimistic and believed on the team working to succeed in a hard mission.

Carol has a power level of 11, making her one of the strongest heroes of the plaza, along with Mr. Gar. she's well respected by many and also heads her own dojo.

In the past, as Silver Spark, she was very praised due to her power. Once she even could take down by herself the entire Kaktus Krew.

Even after quitting in heroism, Carol still conserves her strength. In the episode "My Dad Can Beat Up Your Dad" she was strong enough to lift and badly hurt Chameleon Sr., despite the latter's oversized height and weight. In the short "Carol", she proves to be full of energy, able to do many things (like cooking and exercising) without getting tired. Also, she is very flexible and can deliver fast blows.

She's an expert martial artist, as she has taught to K.O. many fighting techniques and concentration before battles. According to Lakewood Plaza Turbo commercial, Carol is the former wrestler world champion.

After seeing a power being used by someone, she's capable of duplicating that power and using it as her own. As shown in "Glory Days", she is able to perform an elbow attack just like Gar's. 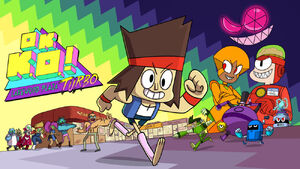 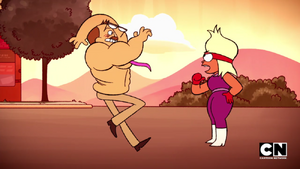 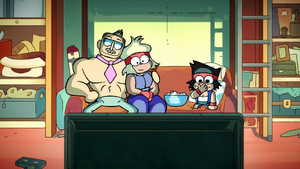 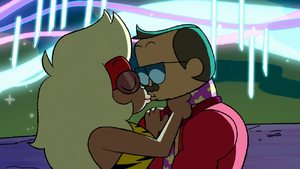 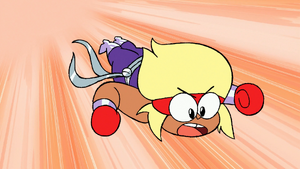 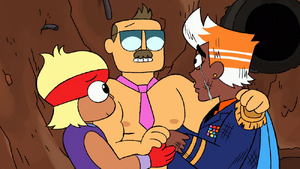 Retrieved from "https://hero.fandom.com/wiki/Carol_(OK_K.O.!_Let%27s_Be_Heroes)?oldid=2146612"
Community content is available under CC-BY-SA unless otherwise noted.