To help Lilac save Avalice from Merga (TBA)

Carol Tea is the main deuteragonist of Freedom Planet series. She is a wildcat who is Lilac's best friend and, alongside Milla, helps her in her valiant quest to save Avalice from the evil Lord Brevon.

She is voiced by Amanda Lott.

Carol is an agile fighter that attacks with rapid-fire punches and kicks. Her special attack, the Wild Kick, grants her brief invulnerability, making it a great option for countering enemy attacks. She can also pounce forward for a quick burst of speed, and attacking right after a pounce will combo it into a strong claw attack. Mobility-wise, she can scale walls by repeatedly wall jumping, and she can also use specialized Jump Pads that warp her to predetermined locations in each stage. Collecting Gas Cans will cause her to summon a motorcycle that increases her speed and attack power and replaces her pounce with a damage-dealing spin attack.

Carol's main weaknesses are her lack of vertical reach, her lack of ranged attacks and her dependency on the environment for most of her abilities. Speedrunning is difficult as Carol unless she obtains a motorcycle as quickly as possible and avoids taking damage, as it will break after 3 hits. While she can fight effectively in enclosed spaces where wall jumping can be used to avoid hazards, she has far fewer options when fighting in open areas.

She and Lilac were on their way to Kingdom Stone; a wealthy place where they were going to steal enough funds to sustain themselves for the year.

When Lilac spots a plane hurtling out of her way into the countryside, she selflessly rushes to rescue the pilot. It's discovered that the pilot is a turtle-shelled, duck-billed man named Torque.

During this Lilac unwittingly catapults herself to the forefront of the impending conflict. Fed up with Brevon's schemes, she eagerly jumps into action to save Avalice.

He asks for help rescuing the Kingdom Stone, a very valuable relic that contains untold amounts of energy. In doing so, they become embroiled in a brewing conflict between three nations of their planet, Avalice.

The three nations: Shuigang, which has become aggressive and warmongering following the death of its king and the rise of his son, the mentally unstable Prince Dail; the city of Shang Mu, whose wealth-obsessed leader Mayor Zao is desperate to solve a recent energy crisis; and Shang Tu, an air city whose Royal Magister is not well-versed in war.

The two rush to the Kingdom's shrine to protect it only to be briefly stymied by Shang Tu's officers, General Gong and the priestess Neera Li, who refuse to believe their claims of a theft plot. However, they arrive just in time to watch the Kingdom Stone be stolen by Spade, a professional thief and assassin, Dail's half-brother, and Lilac and Carol's sworn rival who steals it for Mayor Zao, as part of his own plan to discover the truth of his father's murder. The theft of the stone causes a cave-in, which briefly separates Lilac and Carol, the latter being trapped inside and pinned by rubble. However, Carol is saved by the timid wild child Milla Basset, a basset hound, who had been tailing the pair with the intent of meeting a dragon.

That night, Carol discovers that Torque is not who he claims to be; when she and Lilac press him on it, he reveals that he is, in fact an alien sent to Avalice to apprehend an intergalactic warlord, Lord Arktivus Brevon. Brevon crash landed on Avalice after a fierce battle, and is working on getting his dreadnought operational once more. To accomplish this, he invaded Shuigang, murdered its king, and brainwashed Dail to do his bidding, convincing him that Mayor Zao was the murderer and getting him to declare war on Shang Mu. Brevon intends to use the chaos of the war as a distraction so he can steal the Kingdom Stone for himself. In doing this, he will use its energy to power his space fortress to continue his galactic conquest. After this, she, Lilac and Milla all agree to help Torque reclaim the Kingdom Stone and stop Brevon's plans before it's too late.

With the Kingdom Stone and their friend in enemy hands, and no leader on Avalice to call an ally, the stress causes the remaining trio's relations to break down. Lilac wants to rescue Torque and help him complete his mission as it's the right thing to do, while Carol just wants to lay low and spend her life with her best friend rather than keep risking her life, and storms off. Convinced by Carol's pleas that she's been recklessly endangering her friends, Lilac sends Milla off to go with Carol, and heads off to save Torque herself from Brevon's nearby base.

Carol and Milla find Spade and convince him of Brevon's existence. The three then storm the base and rescue Torque and Lilac. Brevon manages to catch all of them in the torture room; however, the base suddenly begins to implode, and the heroes make their escape. The group ends up separated once again in the ensuing chaos.

Carol is a tomboy and is a rather impetuous wildcat, and Lilac's best friend. Carol is impulsive and tends to get in trouble, but she's intensely loyal to anyone she considers a friend. 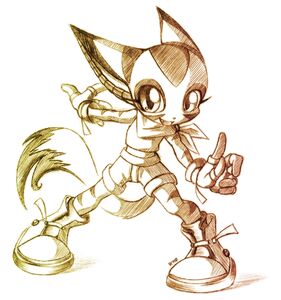 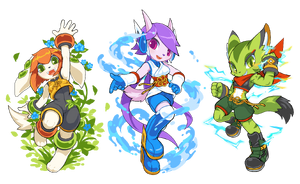 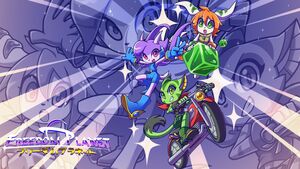 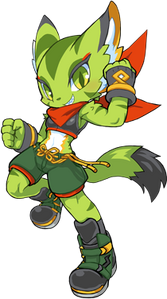 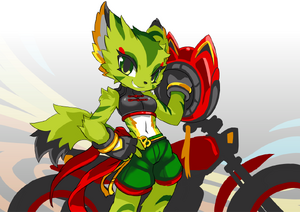 Retrieved from "https://hero.fandom.com/wiki/Carol_Tea?oldid=1920689"
Community content is available under CC-BY-SA unless otherwise noted.