The Carrangers are the main protagonists of Gekisou Sentai Carranger. They consisted of five employees at the Pegasus Auto Garage and use Kurumagic Power to fight the Bowzock.

Years later, the Space Empire Zangyack invaded Earth. This threat was so great that all of the first 34 Super Sentai, including the Carrangers, were needed to oppose them. The 34 Sentai put up a valiant fight against the ground forces, but when the Zangyack fleet itself attacked them, Akarenger told everyone to combine their powers and save the Earth. This destroyed the Zangyack fleet and resulted in the loss of their powers, which resurfaced as Ranger Keys, that were dispersed throughout the universe.

The keys were collected by AkaRed, and later utilized by the 35th Super Sentai, the Gokaigers, a group of five people from different planets who came to Earth in search of the Greatest Treasure in the Universe. Ep. 1: The Space Pirates Appear Sometime after the war, Kyosuke, dedicated his time to teaching children about the laws of road safety with improvised acting on his part, but to no avail. The children constantly ignored his lessons, often going off to other things. He eventually catched the eye of the Zangyack Empire when Barizorg discovered he was the man that interferred with Zaggai's mission. Insarn takes one look at Kyosuke and is immediately smitten by his looks. She enlists the help of Jealousto to capture the former Red Racer, which ultimately draws the attention of the Gokaigers, who were searching for a Sentai warrior connected to traffic safety. He introduced himself to the group, hoping to enlist their talents in his acting troupe. The Gokaigers declined and fled from warrior, but only Don was caught by Kyosuke. When things didn't go as planned, Insarn attempted to capture Kyosuke herself, eliciting a jealous reaction from Jealousto, who tried to kill Kyosuke. He was eventually saved from both Zangyack warriors when the Gokaigers used the Carranger Ranger Keys to fend off a enlarged Jealousto and Insarn realized her "love" for Jealousto. In the end, Kyosuke managed to successfully teach the children about traffic safety when the Gokaigers agreed to act as bickering traffic lights. Kyosuke was satisfied and granted them the greater power of the Carrangers. Ep. 14: Now More Road Safety

After the Gokaigers finally defeated Zangyack, the Gokaigers returned the Ranger Keys before they left Earth to find the second Greatest Treasure in the Universe. It is assumed the Kyosuke and his team have their powers once more. Final Ep.: Farewell Space Pirates

Pink Racer
Yoko Yagami
Add a photo to this gallery 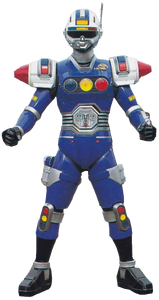 VRV Master
Add a photo to this gallery

White Racer
Radietta Fanbelt
Add a photo to this gallery

Retrieved from "https://hero.fandom.com/wiki/Carrangers?oldid=1721054"
Community content is available under CC-BY-SA unless otherwise noted.