Fit in and achieve acceptance (both failed).
Have fun at the senior prom (briefly succeeded)
Punish all those who have been tormenting, deceiving and mistreating her (succeeded).

In the introduction to the book, King states that the character of Carrietta White was based off of two real girls who he knew in his adolescent years while in grade school. Both girls were bullied to death and were the inspiration for King's novel. Carrie is the main anti-villain of the story. She is the tortured soul turned murderous villain whom the third party can root for with guilty pleasure. The true villains who are strictly the antagonists throughout the entire plot are her worst enemy Chris Hargensen, the sociopathic and popular school bully with a wealthy lawyer father, and her severely mentally ill mother Margaret White, a religious and abusive fundamentalist.

She was portrayed by actress Sissy Spacek in the classic 1976 film, Angela Bettis (and Jodelle Ferland as a child, whom also played Alessa Gillespie/Sharon Da Silva in Silent Hill, and Alexis Baxter in Home Alone 5: The Holiday Heist) in the 2002 made-for-TV movie, Chloe Grace Moretz (who also played Hit-Girl in the Kick-Ass films, Cassie Sullivan in The 5th Wave, Kayla Forester in Tom & Jery, and also voiced Red Shoes in Red Shoes and the Seven Dwarves and Wednesday Addams in The Addams Family animated films) in the 2013 remake, and in the original 1988 musical by stage singer and performer Linzi Hately.

The character of Carrie has a history that is bizarre and tragic. Her story is a thought provoking and cautionary tale about social isolation, peer pressure, religion and the outcome of bullying. She was the only child of Ralph and Margaret White. Both of her parents were fundamentalist Christians and promised each other to never have sex before marriage. Margaret most likely never wanted children. However, Ralph raped Margaret one night when he came home drunk from a Roadhouse down the street from their house. Though Margaret put up a fight at first, she eventually admitted on the same night of her death, that she smelled the whiskey on his breath and she liked it. Carrie's father eventually left her mother when he got another woman pregnant, and died shortly after. Margaret was left all alone to give birth to her daughter in her own home, whom she named Carrietta, the girl better known as Carrie.

Carrie has two faces, one being the victim she is made into by her circumstances and the other being the villain she transforms into. Thus giving her two separate characters that dwell inside of her inner psyche, like a second twin of the opposite or split personality. Throughout her story in both the book and the movie, Carrie's first persona was a humble one. She was portrayed to be a loner, shown also as a shy and timid young woman with no confidence. Carrie appeared to suffer from bipolar disorder, or possibly post-traumatic stress disorder.

Carrie was a fractured young soul, in need of support and love, but it was only handed to her in small amounts, and at a very high cost. Carrie was a girl who had a traumatizing childhood and longed for a friend and someone who truly understood her pain and suffering. Alas, she let her telekinesis get the better of her and this, coupled with all the abuse she suffered, caused her to undergo a villainous transformation and rebirth. Carrie evolved and morphed into her second personality, a persona of darkness and distorted evil fueled by malice which dominated the Carrie we originally sympathized with, and any other positive traits Carrie once had before were completely unvisible and she was hardly recognized as the same person.

Notably, even after her descent into villainy and madness, Carrie is usually shown to still not be completely bereft of redeeming qualities.

In several versions, she spares her teacher Miss Desjardin's life in appreciation of the kindness she had shown her, and also chooses to let her classmate Sue Snell live even though she was one of the kids who bullied her. Finally, she sought comfort in her mother following her rampage, suggesting that she still loved her and wanted to be loved by her even after all of the abuse Margaret subjected her to, and regretted it instantly after killing her mother.

Carrie's look is much more appealing in the Hollywood/TV movies and musicals than the acne ridden and overweight Carrie that Stephen King envisioned.

Carrie has bad posture and slouches. She keeps her eyes glued to the floor at all times, other than in P. E. or class. Carrie displays nearly every negative trait an outcast misfit could have.

As a small child, she was described by neighbors as being a very pretty little girl, who always wore homemade bright colored clothes, stockings and long skirts every day at school and at home. But over the years Carrie did a "reverse ugly duckling". In the novel, long after Carrie's death, Estelle Horan, the Whites' former neighbor who used to sunbathe topless in her own yard as a teen, blames Margaret for sabotaging Carrie's natural beauty.

"She was such a pretty girl,' Stella Horan resumes, lighting another cigarette. 'I've seen some high school pictures of her, and that horrible fuzzy black-and-white photo on the cover of Newsweek. I look at them and all I can think is, Dear God, where did she go? What did that woman do to her? Then I feel sick and sorry. She was so pretty, with pink cheeks and bright brown eyes, and her hair the shade of blonde you know will darken and get mousy. Sweet is the only word that fits...you could still see the misery within her, but she was just so sweet and bright and innocent. Her mother's sickness hadn't touched her very deeply, not then!"

She was never seen wearing denim jeans or short skirts or tops that revealed cleavage because her mother does not want her daughter to wear fashionable clothes that she describes being "ungodly" or "provocative". Carrie is forced to wear homemade clothing that her or her mother sew that resembles the style of a "Thanksgiving Pilgrim/Pioneer". 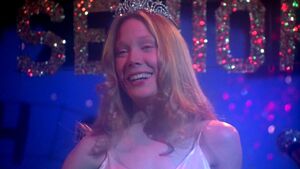 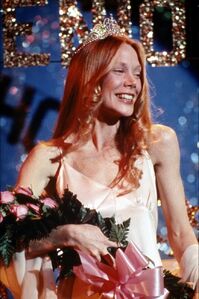 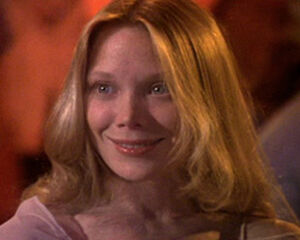 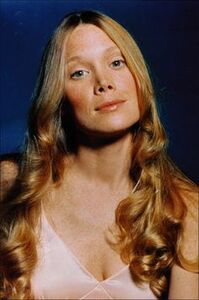 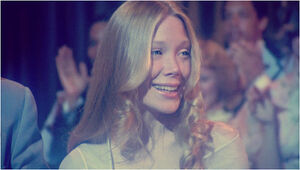 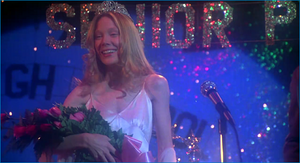 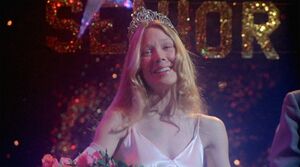 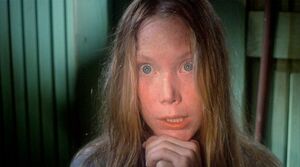 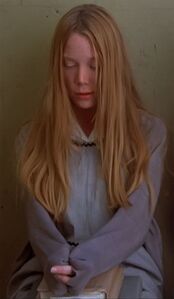 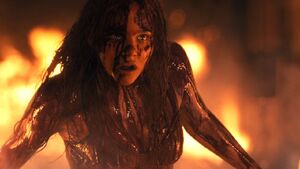 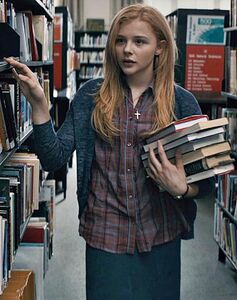