Heroes Wiki
Register
Don't have an account?
Sign In
Advertisement
in: Female, One Piece Heroes, Anime Heroes,
and 43 more

To see the world.

Witness the New Dawn of the Straw Hat Pirates.

Carrot is one of the major characters of the One Piece franchise. She is a rabbit mink in the Warrior Beast Tribe, a member of the Inuarashi Musketeer Squad, and a ruler's aide. She joined the Sanji Retrieval Team to rescue Sanji on Whole Cake Island.

She is voiced by Kanae Itō in the Japanese version (who also voices Boa Hancock as a child and Blue Fan in the same series) in Japanese and Tia Ballard in the English version, who also voiced Mizore Shirayuki and Happy.

Carrot is a young rabbit mink and one of Dogstorm's musketeers and the rulers' aides. Having never left Zou before and curious about the outside world, she decides to tag along with the Straw Hats as they went to Whole Cake Island to rescue Sanji.

Despite being a musketeer, she's very close to Pedro because he used to train her when she was younger.

Carrot is a white-furred, blonde-haired, curvaceous, and well-endowed rabbit mink with brown eyes, rabbit ears, a rabbit-like nose, and a large round fluffy tail.

She seems to be short when compared to normal-sized people like Roronoa Zoro, Wanda, Sanji, or even Nami.

In her first appearance, she wore a short orange dress with laced-up open sides with the Guardians' signature green cape, a single rabbit paw-like gauntlet, and brown, high-heeled boots.

Carrot's personality has similarities with Luffy's as she is also energetic, friendly, and adventurous. She likes to nibble the ears of people she likes.

As a Mink, Carrot has superhuman physical abilities Carrot is immensely quick and agile, having effortlessly dodged a slash from Roronoa Zoro. She is also capable of flipping backward multiple times and attacking immediately afterwards. Carrot can levitate and jump in midair as well as jump extremely high. She is highly perceptive and has incredible reflexes, being able to notice Randolph's extremely quick ambush before Nami and Chopper did, and managing to pull them out of harm's way a split second before Randolph attacked them. Carrot is also physically very strong, as she is capable of carrying two large weights in her arms while still being able to run at the same time. She has incredible leg strength as she can topple a massive pot of boiling soup towards Brûlée with a kick. She is considerably durable, as she was able to sit back up after being stomped to the ground by Charlotte Katakuri, one of the Sweet Commanders of the Big Mom Pirates.

As a Rabbit Mink, Carrot has superhuman speed.Her immense speed is further shown when she instantly caught Diesel who is an extremely fast runner, despite him having a running start.

Like all Minks, Carrot has the power to use Electro. Carrot is extremely skilled in hand to hand combat, using Electro enhanced clawed fist, bites, and kicks to defeat large numbers of enemies. While enhanced by her Sulong form, she was able to overpower Daifuku's entire fleet within a short period of time.

Carrot wears two clawed gauntlets on her hands that resemble rabbit paws. They were given to her by Pedro when he believed that she could not handle a sword. They are strong enough to clash evenly with Zoro's swords and can have Electro channeled through them.

When Carrot looks at the moon, she transforms, In this form, Carrot's strength, speed, agility, Electro, and fighting abilities are magnified, allowing her to take out multiple members of the Big Mom Pirates in the blink of an eye, and rip out the helm of Charlotte Daifuku's ship. Her gliding abilities have also improved, as she was able to glide from the crow's nest of the Thousand Sunny to Daifuku's ship a great distance away. 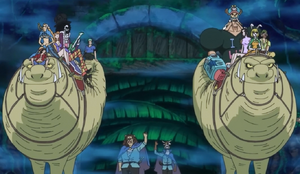 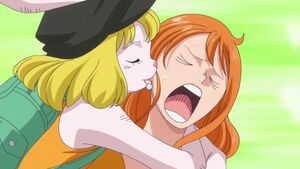 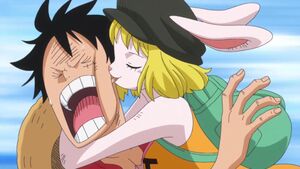 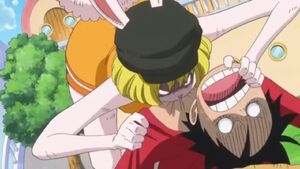 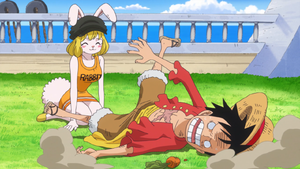 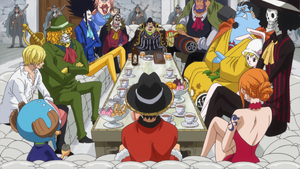 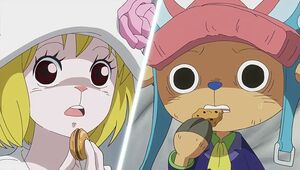 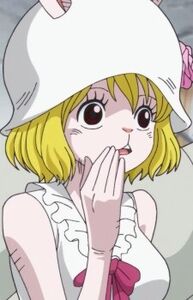 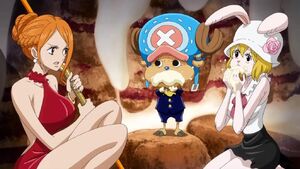 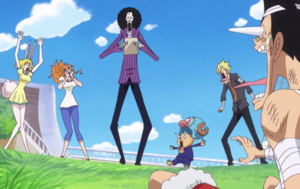 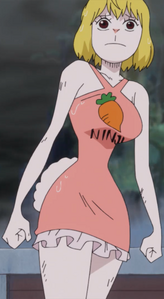 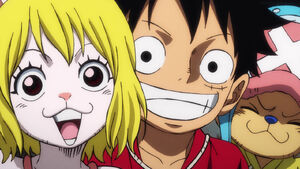 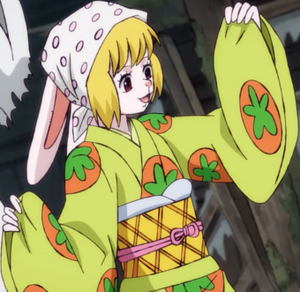 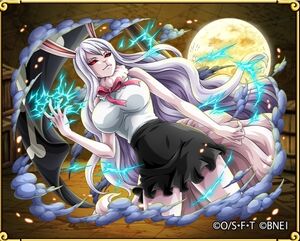 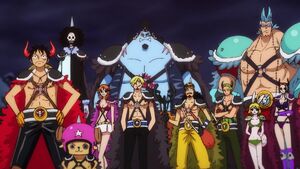 The Straw Hat Pirates are wears in Beasts Pirates.