Aid Griffith in his quest to take his own kingdom (formerly)

Heroine from the Past

Casca is the deuteragonist from the anime/manga series Berserk.

As a young lowborn girl, hardships such as starvation and potential abduction are a normal fact of peasant life for Casca in her mountain village. At twelve years of age, her parents send her off to work as a castle maid for a seemingly courteous nobleman. However, en route to the castle, the noble reveals his lustful intentions, chasing Casca from their carriage and pinning her down in an attempt of rape. Just as she begins submitting to her attacker, Griffith appears on horseback and slices off the noble's ear, expressing his disdain for the man's sense of entitlement and superiority. Rather than eliminate the pedophilic noble himself, Griffith extends his sword to Casca, telling her to wield it if she has something to protect; as the nobleman lunges for her neck, Casca takes up the sword and places it inline with her attacker's chest, piercing through and killing her assailant. Filled with unease from her first kill, she is calmed by Griffith and entranced by the marvelous nature of her savior from then on. With her attacker dead and chances of being reintegrated into her village low, she decides to join Griffith's Band of the Hawk.

After Joining Band of the Hawk

She was the only female soldier in the original Band of the Hawk and is behind only Griffith and Guts in swordsmanship. Her ambivalent relationship to both of them makes her moody and capricious.

After Griffith is imprisoned, she becomes the leader of the Band of the Hawk, proving useful in fending off the constant assaults issued by the Midland King. After Guts return and the strengthening of their relationship together (which culminates in the two spending the night with each other), they embark on a rescue mission to recover Griffith. However, after the trauma of the Eclipse, especially her rape at Femto's hands, Casca has seemingly lost her memory and speaking abilities. In addition to being Guts's lover, she also gave birth to their child, which had become tainted during Femto's rape becoming a misshapen fetus. This child seems to track down his parents till his apparent death he protects his mother a couple of times from other creatures of the night.

During her travel with Guts, the strain of watching over her in her state and fighting against malicious spirits for nights on end drove Guts to succumb to his inner beast and possibly rapes her (he experiences a vision of raping, biting, and killing her, and subsequently realizes that at least the biting actually occurred). Consequently, she now detests Guts and has found comfort in the only adult female traveling with them: Farnese. As Casca travels completely oblivious to her surroundings, Guts and company keep a close watch over her. She has put herself in grave danger many times but Guts' group has yet to fail to come to her rescue and protect her. She seems to slowly be warming up to Guts again even coming to his side when he is unconscious to watch him.

Casca's well being is the driving force for Guts to keep himself from reverting back to a revenge-obsessed wanderer. While outside Vritanis, the Skull Knight revealed that her mental state may be cured at their final destination, Elfhelm, by the King of the Flower Storm.

Upon reaching Skellig and arriving in Elfhelm, the party rests for a night and is then escorted by archmage Gedfring and the attendant Danann to the Flower Storm Sovereign's cherry tree palace, where Danann transforms into and reveals herself be the sovereign of Elfhelm.

After sentencing Puck and Manifico to a day of community service when the two's plot to overthrow her fails, Danann asks Schierke and Farnese to accompany her and Casca in the "Corridor of Dreams". Once in a mushroom filled chamber, Danann explains to Farnese and Schierke that the Passage of Dreams ritual requires them to astral project themselves into Casca's mind and find a resolution for the incident responsible for their companion's mental state.

The two initially find Casca's dreamscape to be a series of childish scribbles, representative of her current fragmented psyche. Guided by Danann's cherry blossom petals, they discover a fractured doll representing Casca's current state, and trek onward collecting memory fragments to gradually repair the broken effigy. After climbing up an miasmic mountain hovered by a black sun, the two sorceresses arrive at a thorned cocoon containing Casca's last memory fragment. 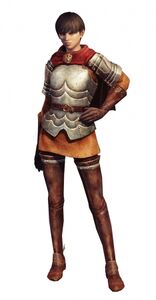 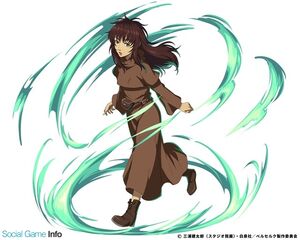 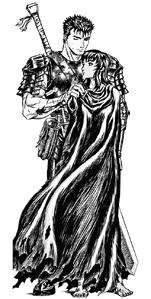 With Guts
Add a photo to this gallery

Retrieved from "https://hero.fandom.com/wiki/Casca?oldid=2298746"
Community content is available under CC-BY-SA unless otherwise noted.