Hanging out with her friends, going to the mall, shopping.

Escape from Kevin Wendell Crumb and his own 24 identities as fast as she can and to manipulate him into defeating The Beast and to return to her quiet life as well as to find a new house (All Succeeded).

Help her friends to escape with her and to save them from death by The Beast (failed)
Expose the existance of superhumans to the world, thus undermining the conspiracy centered around supressing and/or exterminating them (suceeded)

Casey Cooke or simply Casey is the deuteragonist of the Eastrail 177 film trilogy, serving as the main protagonist in the second installment Split, and the tritagonist of the third and final installment Glass.

She is a young and calm high school girl with a dark past of self-harm and being molested by her own uncle, which she used to live with after her father passed away.

She was portrayed by Anya Taylor Joy, who also played Illyana Rasputina/Magik in The New Mutants as an teenager and Izzie Coffey as a 5-year old.

Casey was born in New Jersey. As a child, she was molested by her uncle John, her father's brother. When her father died suddenly of a heart attack, John took custody of her and sexually abused her for years.

Violence by her Uncle and Escape

Since that she was transferred to the hands of her own uncle, Casey started to suffer from molestation and harsh violence from him. One day, on the age of 12, she had managed to escape from him, but she was too ashamed to go the police, and eventually went back home.

Many years later, Casey went to a high school at Philadelphia, and lived with her friend Claire Benoit. One day, Casey meets up with Claire and another girl Marcia, and Claire's father, but acts quietly the whole time. It is suggested that Claire invited her so that she didn't hurt Casey's feelings.

When Claire's father offered to take the girls home, and returned to the car, they are ambushed by a mentally ill man named Kevin Wendell Crumb, appeared as one of his own 24 identities; Dennis, a tough and manipulative pedophile. Dennis attacked and murdered Claire's father, and entered into the car. Then, Casey and her friends were sprayed by him with a special sleeping gas.

The three girls awakened at a room of a secret house. Dennis entered into the room and took up Marcia but not before Casey told her to behave herself even if it was an unexpected violent assault. Outside the room, Dennis wanted Marcia to dance for him, and he sexually harassed her. Marcia managed to prevent him from doing it by biting him in the hand, causing Dennis to leave Marcia in the room.

Many days later, the trio with Casey's leadership had seen something that somewhat looks like a woman. That woman entered into the room, and revealed to be Kevin under the identity of Patricia, a real woman-like manipulative identity. Then, Casey had come to a point of realization that Kevin is a man with personality disorder, and she had decided to meet with Kevin's child-like persona, Hedwig.

Being Aware to The Beast

After that, Hedwig informs and warns Casey and the two other girls from their terrible fate. Their fate will soon be doomed by The Beast, the 24th personality which is considered to the most powerful and the most dangerous identity of all the others. Hedwig changed himself, and became Barry, a kind and cute artist. Barry manipulated Casey to escape, only to discover that he lied.

Hedwig returned, and kept warning the others from The Beast ,saying that this is a superhuman being. Casey quickly started to kiss Hedwig in order to manipulate him into releasing them, yet, it was too late before Dennis emerged again.

Weeks later ,Kevin went to meet with his own psychiatrist, Dr. Karen Fletcher, while the girls managed to find walkie talkie. Using the device ,they partially manage to communicate with the police. Returning to the house, Dennis once again emerged and abused them once again. Then, Casey, Marcia and Claire begun to plan their escape.

The Final Confrontation, The Beast and The Escape

After many weeks, Dr. Fletcher saw an email written by Kevin, yet, it was only the girls. She arrived to visit him, revealing the girls in the process. Confronting Dennis, Fletcher attempted to manipulate him into releasing them, yet, he drugged her, making her weak and causing her to faint. Then, Dennis went to buy some flowers for the house, and entered into the train car, where Kevin or rather Dennis, transformed into The Beast.

The Beast then killed the train driver (even if it is not seen, it was confirmed), and went on a murderous rampage. Returning to the house, Dr. Fletcher waked up ,yet, she was too weak to react against The Beast. Then, she had written Kevin's name on a letter ,saying that this is the only way in which both The Beast and both the entire identities can be defeated. Then, The Beast smashed Dr. Fletcher and killed her violently, and then, he went to Marcia's room and killed her. Casey succeeded to flee from the Beast, yet, she saw Claire, but she failed to help her once that The Beast caught her and ate her to death.

Escaping, Casey went to Kevin's room, and she saw Fletcher and her letter. The Beast arrived, and started to crawl on the walls to Casey's horror. Then, she started say Kevin's full name, partially defeating The Beast. Kevin emerged, and said that he has a shotgun and few bullets in his locker around the house. Yet, Barry took over him, and tried to stop her and so does Dennis. Then, Casey started escaping but not before The Beast once again appeared.

Using the shotgun, Casey was able to defend herself even if the shotgun's shots weren't able to kill The Beast. Then, The Beast explained that Kevin, Dennis and Patricia, had always planned a master plan; to get rid the world from those who are impure, indicating the fact that The Beast existed so to be able to kill those are impure, and the impure are the people who haven't suffered as Kevin has. After cornering her, the Beast began to use its incredible strength to break the metallic bars, and saw Casey's scars on her body, causing The Beast to spare her life, realizing that Casey was, in its sickening view, a kindred spirit of sorts. Casey was discovered by a janitor later on, and brought to the surface, where an ambulance tended to her wounds.

Eventually, a police officer arrived and told Casey that her uncle had arrived, and asked if she was ready to go home with him. Casey's only known response is to stare at the officer with a look of determination, leaving to ambiguity what her answer is. It is suggested by her reaction that she is finally ready to confront him.

Three weeks after her horrific encounter with The Horde. Casey was show to have reported her uncle to the police and to have been living at a foster home. She sees on the news that the Horde and a vigilante, David Dunn aka 'The Overseer' have been taken to a mental institution. Casey contacts Dr. Ellie Staple to ask permission to meet Kevin again to which Dr. Staple agrees.

By the time she arrives, Hedwig is in control who is ecstastic at seeing her again. Eventually, all the personalities except Kevin take turns greeting her, even being greeted by the Beast as well. Desperate to see him again, Casey, knowing that the Beast wouldn't hurt her, wrapped her hands around him and spoke Kevin's full name. Eventually, Kevin was brought back into the light. Kevin expressed relief at seeing she survived.

Casey Cook is a solitary, independent and extremely complicated young woman. While, as a child, she was seen as adventurous and bright, after her father's death and serious abuse at the hands of her uncle, Casey became withdrawn, moody and antisocial to an extreme. When invited to her friend's birthday, Casey remains incommunicative and withdrawn throughout, which both Marcia and Claire found unsettling and difficult.

After being abducted by Kevin Wendell Crumb, Casey's personality transformed considerably - firstly, while both Marcia and Claire remained frihgtened and paranoid, Casey worked to keep a clear head and remained calm throughout. She proved herself, on several occasions, to be extremely observant and highly intelligent: at the start of their abduction, Casey acknowledged that Kevin was significantly stronger than either of them, and that a physical confrontation with him would end in failure very quickly. When faced with the different personalities in Kevin's head, Casey worked to adapt to each of them, especially the younger, more naive personality in Hedwig - she tried to adopt an almost sisterly relationship with him, proving her resourcefulness and adaptability.

Casey's maturity is shown throughout her abduction, as evidenced by how she frankly viewed each situation that faced her and the other girls from Kevin - when one of them attempted to escape by assaulting Kevin, Casey desperately tried to convince her otherwise. Both of the other girls made mistakes that landed them on the bad side of Kevin's several personalities, whereas Casey constantly worked on more cunning, meticulous ways of escaping. When she believed that 'Hedwig' had a window that could aid her escape, she exploited him into showing it to her, only to react with stunned silence when she realised he meant the drawing of a window that he had done.

Even though Casey is a mature, calm and clever girl, she clearly has her breaking point, which she is brought to near the end of her ordeal when she finally comes into conflict with Kevin. After Kevin becomes 'the Beast', she works quickly to try and revoke the power that the Beast had over Kevin - it worked very briefly, but destabilised all of the personalities inside his head, which tried frantically to take control. Brought to the end of her tether by the horrors she had experienced, Casey finally resorted to combat with the Beast when it returned; she armed herself and attempted to kill it, despite being grievously injured and physically inferior to the Beast. She found herself unable to respond when the Beast labelled her as pure and different for what she had suffered.

As a child, Casey was afraid of her uncle, and the abuses he inflicted on her. At the end of her ordeal, it is suggested that she has gained enough nerve to stand up to him.

Casey is a surprisingly skilled markswoman, since her father took her hunting before he died. Even though she was unable to properly kill the Beast during their climactic showdown, she hit him several times. 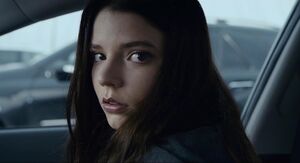