Teenage Mutant Ninja Turtles: Out of the Shadows

Casey Jones is one of the main characters of the 2016 live-action movie Teenage Mutant Ninja Turtles: Out of the Shadows.

He is portrayed by Stephen Amell who played Oliver Queen in the live-action series Arrow and the spin-off The Flash.

He was one of the two police officers driving the prison truck that carried Shredder, Rocksteady and Bebop to their long-term facility. However, he was no match for the Foot who attacked the convoy and cut off the top of the truck. During the battle, he caught a glimpse of the Turtles' garbage truck shooting manhole covers.

Upon returning to New York, Jones found himself being implicitly blamed for Shredder's escape. When he described what he saw, he was taken off duty. Frustrated and angry, he decided to track down Bebop and Rocksteady on his own, using a hockey mask to conceal his face, which led him to April O'Neil being chased by the Foot Clan.

Raphael called him in to help them steal a vial of purple ooze from police evidence, which Jones only agreed to because Raphael untruthfully said it would help them find Bebop and Rocksteady. However, the plan went wrong and both Jones and April were arrested, and the Turtles' existence was exposed to the NYPD.

Jones was reluctantly released by Rebecca Vincent just as the dimensional portal opened and the Technodrome began assembling. He was sent to go close the portal along with April and Vernon, but ended up going up against Bebop and Rocksteady in a parking garage. He defeated the two mutants by knocking a grenade into the shipping container that they were inside.

Later, he was present when the Turtles were given the keys to the city. 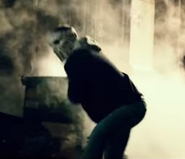