The King of Thieves

Having gold
loving being rich

Retrieve the Hand of Midas and return to his family to give them the prosperous and rich wealthy life they deserved (partly succeeded).

Cassim is the supporting protagonist and an anti-villain in Disney's 1996 direct-to-video sequel film, Aladdin and the King of Thieves. He is the leader of the Forty Thieves and Aladdin's long lost father.

He was voiced by John Rhys-Davies and his singing voice is provided by Merwin Foard.

Cassim is the father of Aladdin. Long before the events of the the first film, he left his wife and young son in order to find a better life for the poverty-stricken family. While he was gone, Aladdin's mother died, leaving Aladdin as a presumed orphan. At some point, he became involved with the Forty Thieves, eventually becoming their leader, and began a search for the Hand of Midas, which could turn things into gold.

In the film, Cassim leads a raid on Agrabah in an attempt to find the Oracle, which could answer a single question about any subject, in the hopes he could ask her about the Hand of Midas. The raid is ultimately unsuccessful, but obstructively interrupts and ruins Aladdin and Jasmine's wedding, leaving the wedding pavilion in complete shambles.

After the thieves retreat, Aladdin unexpectedly finds the Oracle, and learns of the survival of his father, whom he had presumed was deceased, and his location with the Forty Thieves. Aladdin tracks the Forty Thieves to their hideout, but to his shock, learns that his father is actually Cassim, their leader, rather than a prisoner.

Aladdin gains entrance into the Forty Thieves by fighting and defeating Sa'Luk in a fight. After learning from Cassim the real reasons for his departure from their family, Aladdin decides to help Cassim get into the palace. However, Cassim is convinced by Iago to rob the royal treasury and is arrested. Aladdin helps Cassim escape prison, but refuses Cassim's pleas to flee the city and walk out on Jasmine like his father left him. Aladdin heads back to Agrabah to take responsibility for his actions, while a reluctant Iago joins Cassim alone.

Cassim returns to the Forty Thieves with Iago, only to discover that Sa'Luk has ursuped control and turned the Thieves against him. Cassim is then imprisoned by the Thieves. In order to prove his loyalty to the gang and that he had not in fact sold them out to the Agrabah authorities, Cassim uses the stolen Oracle to locate the Hand of Midas and leads the Thieves to its location, a marble fortress on the back of a gigantic sea turtle.

Aladdin eventually returns, having been warned by Iago of his father's capture, and releases him. The two reconcile and recover the Hand of Midas. Cassim and Aladdin, in an attempt to escape the now submerging fortress, throw the Hand to Midas. Foolishly grabbing the Hand by its golden hand rather than the bronze handle, Sa'Luk is instantly transformed into a permanent golden statue that falls into the sea below. The more athletic Aladdin jumps to recover the Hand (using cloth to protect his skin to avoid the same fate that befell Sa'Luk), then returns it to Cassim, remarking to his father that it pays to have a junior partner.

After escaping, Cassim chooses to throw the Hand away, having realized the pain his obsession brought and that Aladdin was more precious to him the whole time. Although Cassim did not seek vengeance against the Forty Thieves for their betrayal, he unintentionally causes their demises as the Hand accidentally hits their ship, turning it to gold. The solid gold ship proves unseaworthy, and it sinks to the bottom of the sea.

Cassim returns to Agrabah with Aladdin, and due to him technically being an outlaw, witnesses Aladdin and Jasmine's wedding from the shadows. Cassim then accepts Iago as a traveling partner, and the pair travel to see the world and wave to Aladdin and Jasmine as they fly off on their honeymoon. Then Cassim and Iago ride far off into the desert. 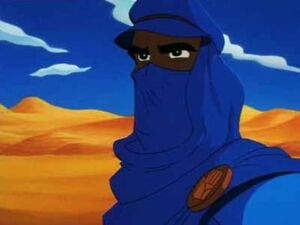 Cassim and the camels making their way toward Agrabah 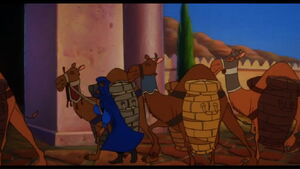 Cassim and the camels walking to the stables of Agrabah 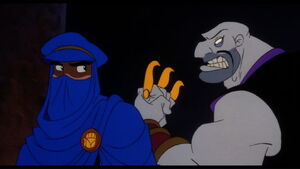 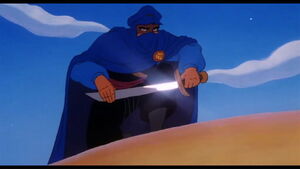 Cassim giving the signal for the Thieves to attack the wedding. 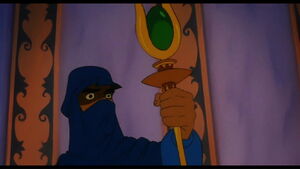 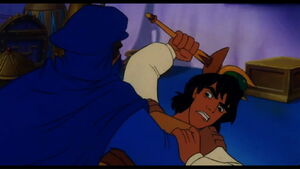 "Fool, you don't stand a chance against the King of Thieves! (Aladdin: When I get up, I'll bow to you!) 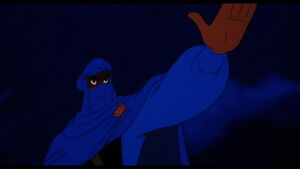 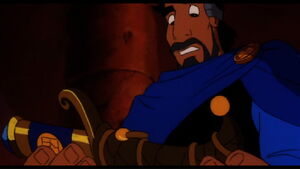 Cassim uncovering Aladdin's dagger, confirming that Aladdin is his son 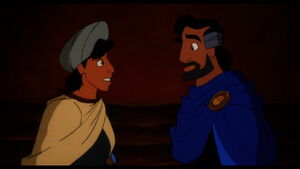 "Look at you. I thought I'd never see you again. Has it been so long?" 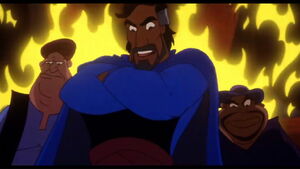 "You killed Sa'Luk. The code of the Forty Thieves is very clear at this point..." 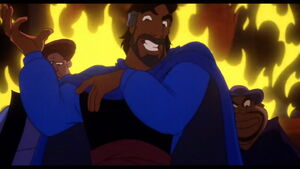 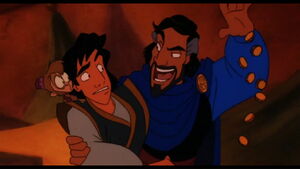 "Larceny is in the genes." 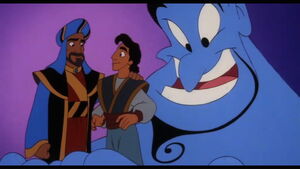 Genie helping Aladdin and Cassim bond as father and son 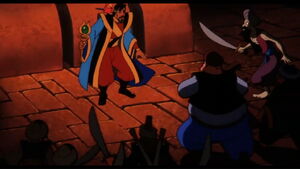 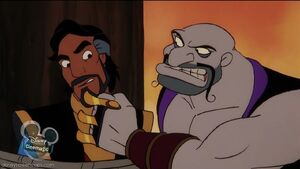 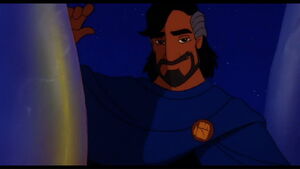 Cassim attending Aladdin and Jasmine's wedding from the shadows 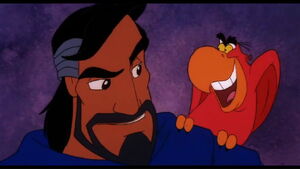 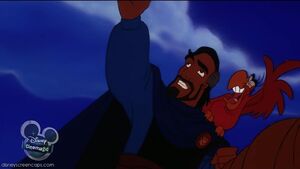