Caster is one of three playable servants available to the Fate/Extra protagonist in Fate/Extra, the other two being Red Saber and Archer.

She was voiced by Chiwa Saitō.

The late Heian period. A beautiful woman who served Emperor Toba. She was said to be the disguised figure of the white-faced, nine-tailed fox. Her childhood name was Misukume. Working in the palace since 18 years-old, she later became a court lady of Emperor Toba under the name of Tamamo-no-Mae. She was said to have gradually gained the favor of Emperor Toba with her beauty and extensive knowledge. Supposedly her appearance was that of a twenty year old.

There are many theories, but later she was driven away from the palace when her identity was exposed by a Onmyouji who investigated and identified her as the cause to why Emperor Toba had fallen seriously ill. After leaving the palace, she built a bad reputation in the fields of Nasu and had to repel an subjugation army of 80,000 men dispatched under the Emperor's order.

Essentially, Tamamo-no-Mae was publicly known as a nine-tail fox. However, strictly speaking she was jackal that was worshiped as a Inari Okami under the assumption of Amaterasu (suijaku) = (honji) Vairocana (Dharmakāya) = (Sambhogakāya) Dakini Deva...

Thought to be a Ukanomitama. Incidentally, in the Genpei Jōsuiki is transmitted how Taira no Kiyomori seized political influence through prayers that made use of this Dakini Deva's power.

In Fate/Extra, Tamamo-no-Mae is a soul that branched off from Amaterasu and her true identity is not that of a nine-tailed fox, but rather is treated as one of the facets of said goddess.

Also, its a big mistake to categorize her as an Heroic Spirit.

Because Tamamo-no-Mae turned into a Heroic Spirit in order to realize her wish of "becoming a good wife", she cannot manifest her original power.

In the case that she is revived as an evil spirit, she will undergo a transformation into a large monster that can defeat even 100 heroes. It is not just for show that she is called one of Japan's Three Great Monsters.

Caster is sometimes comic relief, being a goofy, silly, and cheerful young fox woman. She sometimes take the battle and the situation by each week of the game seriously. She falls in love with the Protagonist, placing herself in the role of their wife regardless of their gender. She expresses that the most important thing is love over anything else.

According to Caster's own words:

"This time there is only one due the constrains of the Moon Cell, but originally I could produce a million troops from my multiple tails!"

That is really suspicious though.

Also known as Red Spider Lily Killing Stone, it is a Skill of Caster that involves the use of the Killing Stone. After her death, Tamamo-no-Mae turned into a rock named Killing Stone, which was tinged with a terrible curse-toxin and caused the humans and animals that approached it to die from poisoning.

Originally located in the plateau of Nasu, Tochigi, but later it was broken by a virtuous priest named Monk Gennou and then scattered in three locations in Japan that were called Takada. Furthermore, the remnants that were scattered at that occasion became Osaki Kitsunes and Inukamis and said to have been turned into familiars by many wizards from various places.

In the game, this Skill gives magical damage to the enemy while also causing a Poison status. However, it can only be activated when Caster's HP is below 30%. 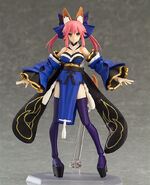 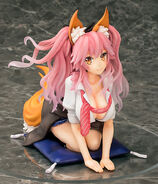