Cat and Dog, better known by their collective nickname CatDog, are the titular main protagonists of Nickelodeon's 1998-2005 animated series of the same name.

They are a conjoined cat and dog sibling with no tail or hind legs. Cat had red nose and Dog had purple nose.

Cat is older twin, he is the smarter and more cunning of the two. He's a cat. He often devises plans to trick Dog into getting what he wants, such as making Dog smarter in an attempt to have more in common with him, or having him win a dog sledding contest by training him in a very hard and militaristic manner, and usually, as a result of his greediness and selfishness, these schemes all blow up in his face. He is the underdog of the two. Life has been hard for the both of them, as they have been shunned by society due to their awkward appearance, but Cat always seems to get the short end of the stick in the situations, especially faced with the Greaser Dogs. With his brains and constant ridiculing from the rest of the characters, he is the more defensive and short tempered of the two. Despite his quirks and spats with Dog, he loves his brother with his whole heart. He cares so deeply that he ends up helping Dog in the end once his guilty conscience gets to him. Cat has a crush on Shriek. In one episode, Cat admits his love for Shriek and kisses her after Shriek kisses Dog and tells him she loves him (only to wind-up getting pounded by the aggressive poodle). Cat desires fame and fortune and tends to go to excessive lengths in order to gain them. He is intelligent and enjoys reading, gardening, and listening to classical music. Cat is somewhat uptight and believes strongly in being polite and neat. He is a stickler for cleanliness and, like most cats, is aquaphobic. He is also obsessed with jet skis, once stating that he would sell his soul for one. Cat is 26 years old. Despite his sophisticated personality, Cat also has a dark side. Whenever he snaps, Cat becomes a ruthless, psychopathic maniac who even the Greasers are scared of once they see what he is capable of doing (especially his stress-induced, superhuman strength, evident when he destroy the Greasers' monster truck with a single punch). Cat's catchphrase is "Terrific," said in a negative tone. He usually says this when something bad happens.

Dog is younger twin, he is the more happy-go-lucky and more naive of the two. He is also the source of clumsiness. He is a dog. He is extremely ambitious when Cat or any other character convinces him to take on a task, diving right into it with full force and energy. Dog is the typical loyal dog and is easily convinced. He will believe everything he is told. His attention span is very short and he is easily distracted by balls, garbage trucks, bones, food, and his overactive imagination. Because of his more simple nature, Dog usually is the one who gets the pair into trouble. Not paying attention to Cat's warnings, his actions almost always end up with some severe consequences. Despite this, in many of the episodes, it is shown that Dog is usually the one that is more popular and athletic of the two, such as the episode when Cat and Dog both went back to school to complete Cat's last day of High School. Like Cat, Dog adores his brother and looks up to him no matter how many times Cat steers him into danger. Dog is the typical animal. He is often distracted with chasing shadows and chasing after tennis balls, and loves eating garbage. Much to Cat's dismay, he leaves a mess everywhere he goes. According to the series finale, Dog remembers what their parents were like "Mom's four eyes, Dad's slimy green skin." He is also 26. Dog's catchphrase is "Hi-ho diggety," and he usually says this when he is excited about something. 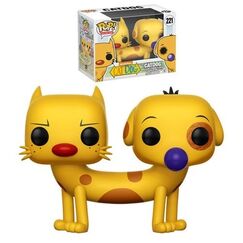 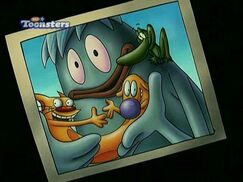 Retrieved from "https://hero.fandom.com/wiki/CatDog?oldid=2224261"
Community content is available under CC-BY-SA unless otherwise noted.