Though sweet and lovable, Cat is very idiotic, naive and air-headed. She is also extremely childish and hypersensitive, reduced to tears when she was scolded by Tori on board the plane as she was distracting Beck and Andre from completing their assignment. At the start of the series she was depicted as being practical and somewhat intelligent but quickly lost any book or street smarts near the end of series one and onward. Cat's remarkable stupidity make strangers perceive her as being somewhat mentally challenged, as shown when trying to find a hospital for Rex when she informed the receptionist of what injured Rex in the first place she confused Cat for being crazy and locked her in a padded room (ironically this was one of the few times Cat was correct about the situation but unfortunately could not explain it in time however she wasn't concerned or attempted to explain that she was sane as her naivety couldn't allow her to realise what others perceive of her). Cat is also revealed to be extremely dependent to technology, especially her phone. When Sikowitz placed a contest between the boys and the girls to see who could go the longest without their devices she was clearly the most weak-willed out of Tori and Jade, practically having to be restrained and once tried to tackle the entirety of her friend, including Jade, Robbie and Beck 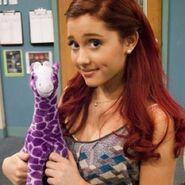 Add a photo to this gallery
Retrieved from "https://hero.fandom.com/wiki/Cat_Valentine?oldid=1933159"
Community content is available under CC-BY-SA unless otherwise noted.