To protect the city from nighttime villains

Catboy (real name: Connor) is the overall main protagonist of PJ Masks. He is the leader and one of the three members of PJ Masks. His vehicular method of travel is the Cat-Car, He is voiced by Jacob Ewaniuk in Season 1, Jacob Ursomarzo in Season 2, Roman Lutterotti in season 3 and season 4, and currently ??

Catboy is the leader of the trio and the oldest too. Incredibly fast, amazingly agile, he can hear the quietest sounds across unbelievable distances! But he's also afraid of water! Still, when adventure beckons, “The amazing Catboy leaps to the rescue!” With these skills Catboy can outrun anyone and gives Night Ninja a challenge with his amazing leaps and acrobatic moves! His vehicle the Cat-Car gets the heroes from A to B in lightning speed and even shoots moth balls should there be anything in the way!

Connor takes great enjoyment in associating with Greg and Amaya. He can be a bit clumsy at times; this was especially emphasized in "Clumsy Catboy". He's also nice, smart, caring, friendly, helpful, and funny. In "Catboy's Great Gig", it is shown that he sometimes has intense stage fright.

As Catboy, Connor leads the PJ Masks through the steps of defeating villains such as Romeo, Luna Girl & Night Ninja. He prefers to have his own way, but still respects Owlette and Gekko when they ring in with their opinions. On many occasions, like his fellow members, childlike immaturity tends to overtake his mindset on the mission leading to issues (such as getting frustrated in "Catboy and Master Fang's Sword" and letting leadership go to his head in "Catboy Takes Control"), but this is always realized and corrected leading to the mission being done properly, and the villain's plans foiled. Despite being the leader of the team, each member still has as much priority.

Connor Gets Power up. 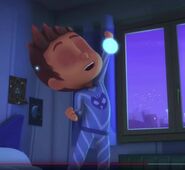 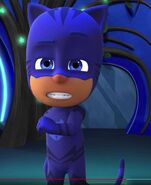