Heroes Wiki
Register
Don't have an account?
Sign In
Advertisement
in: Female, Secret Agents, Voice of Reason,
and 52 more

Cats and Dogs: The Revenge of Kitty Galore

Catherine, also known as Agent 47, is the deuteragonist of the Warner Bros spy comedy film, Cats and Dogs: The Revenge of Kitty Galore. She is a feline secret agent working for M.E.O.W.S. whose goal is to protect the human race from every potential threat. When the cruel Kitty Galore threatens humanity, Catherine is unwillingly forced to team up with cats' natural rivals: dogs.

She was voiced by Christina Applegate, who also voices Brittany Miller in Alvin and the Chipmunks Live Action movies and portrayed as Kelly Bundy in Married...with Children, Sue Ellen Crandell in Don't Tell Mom the Babysitter's Dead, and Veronica Corningstone in Anchorman.

Catherine is a knowledgeable and intelligent agent who takes her job seriously but that doesn't mean she is humorless. She initially takes pleasure in making fun of Diggs such as slashing his fur or denigrating him for being a dog but as the film progresses their relationship improves, especially after that his life was saved on the ferry. Much like Butch and Diggs, she can be enraged by Seamus' stupidity. Despite the typical feline canine rivalry, Catherine is able to put this aside if it means protecting the human species. In the end, she seems to have definitely put the rivalry aside, saying she couldn't refuse to work with dogs again.

Due to her intelligence, Catherine often acts as the voice of reason, making Diggs understand that if he doesn't trust anyone then no one can help him. She was also the one who suggested that the dogs and cats work together. His devotion to M.E.O.W.S. is particularly reliable, especially wanting to arrest Kitty Galore for her betrayal.

Under her serious and petty features, Catherine hides a tender heart filled with compassion. She could tell that Diggs was sad when Butch fired her and took him home to treat him for his minor injury, mostly telling him to stop playing tough and covering himself.

She was in pain at the onset of Aquaphobia but by saving Diggs from drowning, she was able to overcome her fear of water.

Catherine is first seen spying on the dogs Diggs and Butch as they enter Coit Tower to find the pigeon Seamus, having the attention of confronting them. When the bird comes out of its hiding place, Catherine appears and spins the dogs around before the bird takes flight into the air but pursues it with robotic bat wings. She almost grabs him until Diggs damaged one of his wings, almost falling on the cat. The flying pursuit over, Catherine tries one last time to catch a Seamus with a broken right wing before being caught in Butch's net.

In the early morning, the four animals are stashed in a toboggan out of sight and Diggs questions a Catherine handcuffed by means of a water bottle, to Catherine's anguish. Another stream of water malfunctions the cat's agent collar, revealing her status and pushing Butch out of her handcuffs upon learning that she is M.E.O.W.S. Asked about her motives, Catherine reveals the past as an agent of Kitty Galore, whom she must arrest. Still doubting her, Diggs asks her why she is not on Kitty's side since the evil cat wants to eradicate all dogs. Catherine tells her that not all cats are evil and that if they want to stop Kitty, they will need her.

Arrived at the headquarters of the dogs, causing some consternation for the canines when the presence of a cat, the group reports on Kitty Galore to Lou and then to the head of M.E.O.W.S., Tab. When the dogs and cats seem to disagree on how to catch Kitty, Catherine manages to convince them that who gets to catch Kitty doesn't matter because it's the protection of humans that matters most, leading to an alliance between the two organizations. Diggs is against it, which prompts Butch to tell him to wait outside the office, much to Catherine's amusement.

The unlikely gang then travels to a suburban home in Oakland where Seamus' cousin worked for Kitty. Inside, Catherine is spotted by the old catwoman and suffered a suffocating hug. This step passed, they confront Calico in the laundry room for answers after Diggs scares the delivery pigeon away by a crashing entrance. Calico activates the rise of a pool of cat litter for all the stuck in it before Catherine reminds him that he is still in the room with them. As the situation seems lost and Diggs and Catherine continue to bicker, the old lady opens the door, allowing their survival. Back outside, the group interrogates Calico again to learn that the only person who can know what Kitty is plotting is Mr. Tinkles, the main antagonist of the first film.

At Alcatraz prison, the group encounter Tinkles who only taunts them one by one at first, mocking Catherine for her apparent social and family issues first. After getting the only information from the psychopath being a riddle that the answer is in the cat's eye, the group are on the return ferry where they are ambushed by the MacDougall Twins. Diggs having taken in its place a grapple leash which draws it towards the water, Catherine first faces the bigger of the two before being obliged to throw a ball of explosive wool out of the boat. Butch taking care of the other cat, Catherine tries to help Diggs but her phobia of water prevents her from taking action. Diggs eventually manages to get by on his own and captures the second brother but accidentally causes him to flee by trying to interrogate him in his own way.

Landed at Fisherman's wharf, Catherine witnesses Butch scolding Diggs for his continued disobedience and firing him. When Butch asks if she's coming with him and Seamus, she tells him that she has to report to M.E.O.W.S. first, leaving the old dog and the pigeon to continue the mission. Although Diggs initially thinks she was just pretending to thank him for saving her, Catherine admits that she really needs to make a report but thanks him anyway before noticing that the German Shepherd is lame following the brawl, which Diggs denies until Catherine tells him to stop being tough and come with her to heal him.

In the evening, the dog and the cat arrive at the for the moment unoccupied apartment of the owners of Catherine. Catherine warns Diggs to warn her if her nieces annoy her just before her last ones show up to see their first dog excitedly. A little later, Catherine asks her nieces to stop tickling Diggs, causing them to leave the room and then she discovers that Diggs' injury is due only to a small splinter that she removes not that it hurts. dog. Catherine says her nieces could handle it better, which tells Diggs that these little kittens don't hate dogs, a trait Catherine equates with the ignorance of dog-cat rivalry. She then learns that Diggs intends to return to the kennel, which causes her to question the German Shepherd about his time there while making him realize that his problems are related to his being unable to follow orders. When Diggs tells her that he doesn't follow orders because he doesn't trust anyone because of his fear of being disappointed by others, Catherine claims that this also means that no one can help him no more. Their conversation was cut short when an alert from M.E.O.W.S. is activated, causing the two friends to squeeze into Catherine's secret elevator for the organization's HQ.

In the control room, Catherine strictly forbids Diggs to drool, bark, and chase her colleagues. She reports to Tab who panics to the ceiling when she sees Diggs, causing the other agents to panic so much that they run all over the place until Catherine clarifies that Diggs is with her. The alert resolved, Catherine, Diggs and Tab take a look at Kitty's threat video and making the connection to the Tinkles riddle, they find a reflection in Kitty's eye which reveals the whereabouts of the evil cat is hiding, PlayLand.

Driving through town on a sidecar, Diggs and Catherine arrive at the entrance to Playland and enter it after Diggs is knocked out the mascot. They enter a marquee in search of clues before being confronted by Kitty herself and captured by Paw. Suspended by chains above the ground, the duo are forced to listen to Kitty's twisted plan to use her frequency named 'Call of the Wild' across the world through her satellite to make the dogs mean evil. then end up at the kennels forever. Catherine becomes terribly distressed when she sees the glass cage filled with water below and Kitty pierces the bag serving as a counterweight, starting the progression of the dog and the cat in the water, without counting that Catherine is had her gadgets necklace taken. With Kitty and Paw gone and drowning closer and closer, Diggs awkwardly admits he has a crush on Catherine just as the feline thinks about using Diggs' collar to open the cade-na of his chains. Unfortunately, she drops the necklace to the bottom of the water after breaking free. Refusing to let Diggs drown, Catherine finally confronts her fear, retrieves the collar, and releases Diggs before it's too late, while stressing tone that he owes her one before denying the dog's statement about his crush.

As they exit the marquee, they reunite with Seamus and Butch and then set off in pursuit of Kitty. After deducing that the antenna to send the Call of the Wild to the satellite is disguised as a giant merry-go-round, the four friends parachute from the sky and confront Kitty and Paw. In the clash with Paw, they inadvertently activate the antenna, mistaking the red button for a circuit breaker, starting the Call of the Wild. With Diggs having the idea of ​​ripping off the power cables, Catherine accompanies him to the top before they are again confronted by Paw, who turns out to be a robot. Recovering her collar, Catherine gives Diggs access to the cables and the dog stops Kitty's demonic plan by making Paw bite the cables. The group then evacuates the antenna before it explodes.

A few days after Kitty's defeat, Catherine is present at Dog HQ where an escaped Tinkles broadcasts a message from his seaside hideout with Calico to provoke the secret agents to come and get him. Catherine is thrilled at the idea of ​​working with dogs again. 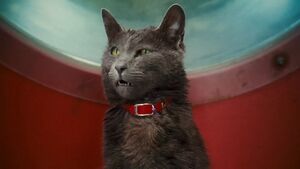 "Guys, question: Why is butt-sniffing always your fallback position?" 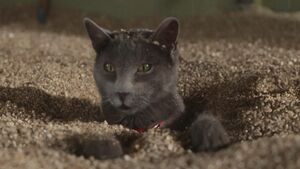 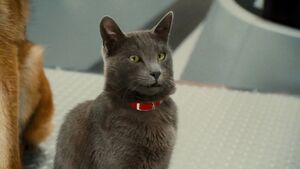 "Work with a bunch of dogs again? How could l say no?" 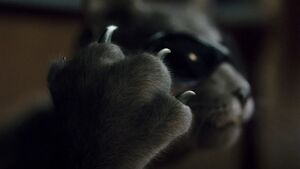 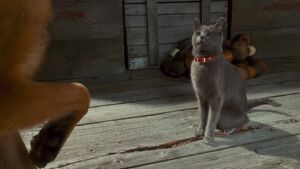 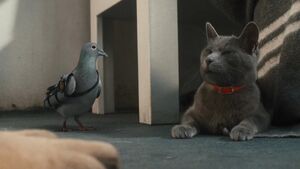 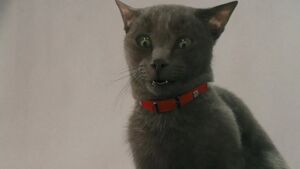 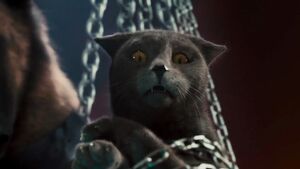 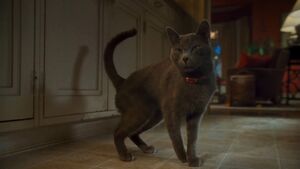 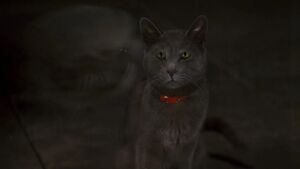 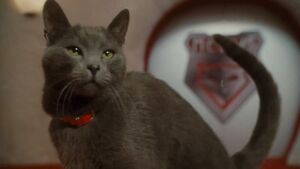 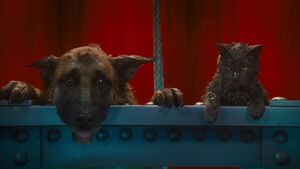 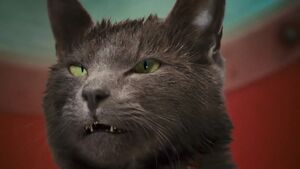