Barbie in A Christmas Carol

Get Eden to stop being selfish and pressuring her.

Help save the orphanage.

Hero's Friend
Catherine Beadnell is a secondary character in the 2008 animated film, Barbie in A Christmas Carol. Catherine, a skilled fashion designer and seamstress, is Eden's prime dress maker in all her shows. Catherine has been Eden Starling's best friend since they were children. She is voiced by Kandys McClure when speaking, and Shauntia Fleming provides her singing voice.

Catherine Beadnell is the childhood friend of the protagonist, Eden Starling. She is a costume designer for the theater. Catherine enjoys Christmas and loves celebrating it with her family.

In the past Catherine and Eden were best friends. When Eden came to her house to celebrate Christmas she gave her a snow globe  as a present. She also made dresses for herself and Eden  and they together perform a song

In the present Catherine comes to the work place and see the other employees throwing tomatoes on Eden's picture. They thought she would get angry but instead of that she joins them. After that she goes to an orphanage and gives outfits as gifts to the orphans. They wear the dresses and sing in the little show Catherine organized for them.

In Eden's potential future, she fired Catherine and everyone else from the Gadshill Theatre for coming in late to work on Christmas Morning. This forced her to scramble for work elsewhere. She found herself another job, but it took her out of town for months. By the time Catherine got back to town for Christmas, she was financially secured and ready to adopt Tammy as her own child. Unfortunately, the orphanage closed down while she was away and the orphans were gone in an attempt to try and fend for themselves. After that, she became less caring and more cruel to her own co-workers. When the visibly poor Eden came to her store for help, Catherine refused and repeated everything she had said. Before leaving, she offers Eden a scarf and dropped it in the snow.

The next morning, after Eden had learned her lesson, she and Catherine visits the orphanage to help the orphans. Then Freddy takes them in a carriage ride to Catherine's house and finally ask her for a date.

She has always treated Eden as a friend even when Eden wasn't nice to her.

Catherine mostly wears a pink-and-cream colored gown that falls off the shoulders with a dark pink bodice and a three-tiered ruffle cream-colored skirt with pink trim. The sleeves end in a cream-colored puffy ends with ruffles. The neckline has a cream-colored bow in the middle with a pink jewel in the center. Bows of the same color decorate the back and the top most parts of the sleeves. She wears a three-strand pearl choker with pink jewel cabochons. 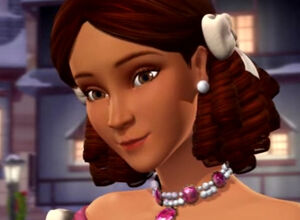 Retrieved from "https://hero.fandom.com/wiki/Catherine_Beadnell?oldid=1870997"
Community content is available under CC-BY-SA unless otherwise noted.