Heroes Wiki
Register
Don't have an account?
Sign In
Advertisement
in: Heroes Of Folklore, Legendary Heroes, Female,
and 38 more

Take the souls of the dead to the city of the underworld.

La Catrina or La Calavera Garbancera (1913). The history of La Catrina begins during the governments of Benito Juárez, Sebastián Lerdo de Tejada and Porfirio Díaz. During these periods, texts written by the middle class began to popularize that criticized both the general situation of the country and that of the privileged classes. The writings, written in a mocking manner and accompanied by drawings of skulls and skeletons, began to be reproduced in the so-called combat newspapers. These were skulls dressed in gala clothes, drinking pulque, mounted on horseback, at high society or neighborhood parties. All to portray the misery, the political errors, the hypocrisy of a society, as is the case of "La Catrina". The "catrín" defined an elegant and well dressed man, accompanied by a lady with the same characteristics; this style was a classic image of the Mexican aristocracy of the late 19th and early 20th centuries. That is why, by giving him such an outfit, Diego Rivera turned "La Calavera Garbancera" into "La Catrina" designed in Aguascalientes.

During the governments of Benito Juárez, Sebastián Lerdo de Tejada and Porfirio Díaz, the images of skeletons and skulls were a common form of denunciation and social criticism in the publications of the time that various cartoonists such as Constantino Escalante, Santiago Hernández and Manuel Manilla used.

The original version is a metal engraving with the authorship of the cartoonist José Guadalupe Posada. The original name is Calavera Garbancera. "Garbancera" is the word by which people who sold garbanza were known at that time and who, having indigenous blood, pretended to be European, were already Spanish or French (the latter more common during the Porfiriato) and denied their own race, heritage and culture.1 Detail of the mural Dream of a Sunday afternoon in Alameda Central. To the left of La Catrina, Diego Rivera (child) and Frida Kahlo; on the right, José Guadalupe Posada. This is made notable by the fact that the skull has no clothes but only the hat; from Posada's point of view, it is a criticism of many Mexicans in the town who are poor, but who still want to pretend a European lifestyle that does not correspond to them. "... in the bones but wearing a French hat with its ostrich feathers." Diego Rivera was the one who gave him his characteristic outfit, with his feather stole, when he reflected it in his mural 'Dream of a Sunday afternoon in the Alameda Central', where the skull appears with its creator, José Guadalupe Posada and a children's version of Rivera and with Frida Kahlo. The mural was frescoed in 1947, measures 4.7 x 15.6 m and weighs 35 t, including a metal structure that reinforces it. It was originally made by Rivera for a very important hotel in the Historic Center of Mexico City, the Hotel del Prado (destroyed in the earthquakes of 1985) and is currently located in the Diego Rivera Mural Museum, created especially to preserve the mural, considered one of the best known visually from the fruitful stage of Mexican muralism. The Catrinas were also accompanied in the newspapers by the famous skulls. The literary skulls are traditionally Mexican compositions in verse that on the eve of the Day of the Dead are usually written as another manifestation of popular culture to make fun of both the living and the dead, and remember that we are all going to die. They are written with a satirical or burlesque language and are very short texts but they reflect all the spirit and festivity of the Mexican in the face of death. Today it is customary for children at school to make fun of or criticize some character or situation of general interest or fashion with this format. José Guadalupe Posada pointed out: "Death is democratic, since at the end of the day, blond, dark, rich or poor, all people end up being skulls." Despite this, the skulls that he imagined and engraved are alive in the imagination of Mexico.

Image of the Catrina in Aguascalientes. Catrina in the Palace of Fine Arts. Nowadays, the catrina, being a popular invention, has become a popular artifact and has gone beyond the limits of canvas or engraving to be part of living Mexican culture, its uses and customs. Part of "the Mexican" and his position in the face of death. It is observed, it is approached, it is made part of its environment, its art and it is a craft that symbolizes miscegenation. It has become a craft that highlights the formal and spiritual wealth of the country. The image of La Catrina is becoming the imagination 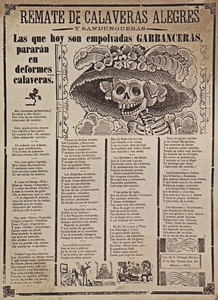 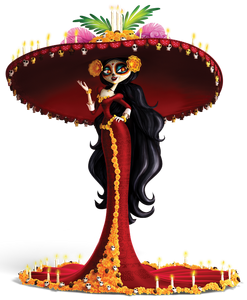 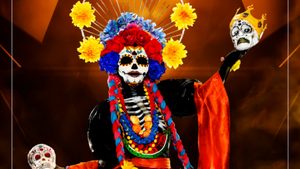 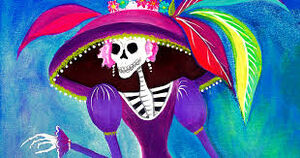 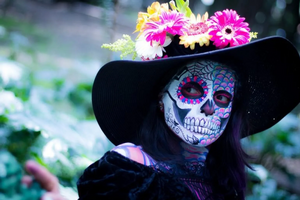 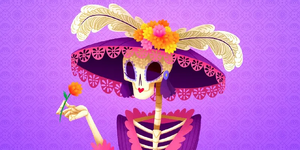 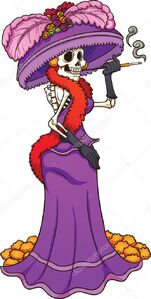