Ability to see the Sleepwalkers who are invisible

Eliminate the Sleepwalkers by any means necessary

Cats are portrayed as a heroic species in the 1992 movie of Stephen King Sleepwalkers. They (particulary the Travis town cats that befriended Clovis) are pet cats who hate the Sleepwalkers just as Clovis does.

After humanity discovered the Sleepwalkers' weakness against cats, they uses cats to purge them all to near extinction. Since they have a natural hatred for Sleepwalkers as much as with dogs (as cats can detect any Sleepwalkers' presence and able to see through their illusion), the cats who participated in the hunt decided to follow their master willingly and worked together as a team to do so. It appears that these cats passed their experience to their descendants, which eventually passed to the cats that lived in Travis, Indiana. Though this may also imply the reasons as to why they joined forces with Clovis to destroy the two Sleepwalkers, not all cats in present days learned how to deal with the creatures if they ever encountered one. At the beginning of the movie, it was shown that one cat had survived the Sleepwalkers’ attack on a town before they moved to Indiana, whereas the others had been butchered by traps around the Sleepwalkers’ former lair. It escaped after the police

inadvertently opened the cupboard where it was trapped along with the Sleepwalkers’ latest victim. It’s unknown if this surviving cat later warned the others about its experience.

Alarmed by Sleepwalkers' presence in the town

Note: The first paragraph of this section is speculation about how Clovis convinced all the cats in town to surround the Sleepwalkers' lair and led them to attack any Sleepwalkers on sight, so it may not be entirely consistent with the events of the movie.

The still-mourning Clovis then left while other police members secured Andy's dead body and escorted the traumatized Tanya back home. He then met his fellow cat friends in town and told them about his tragic experience with Charles. This alarmed the other cats, who told him about Sleepwalkers and the dangers that they posed to humanity and why humans began using their ancestors to detect these monsters and eradicate them to prevent any harm. Some cats that heard about this then supported Clovis' statement as they became suspicious of the mysterious newcomers. The cats that heard Clovis' story then convinced some of their fellow cat friends to amass an army to eradicate the beasts for good and elected Clovis to be their leader.

Soon after, word about the Sleepwalkers' presence in town spread through Travis and caused all the pet cats to swarm to their enemies' lair.

By the time Mary arrived at the Brady house, Clovis and his friends had already surrounded it. This prompted Mary to crash her car into the house, much to their frustation. Unfortunately, one of his friends recklessly charged on Mary and ended up having its spine shattered. With one of his fellow cats fallen due to its reckless action, Clovis devised another strategy. Coincidentally, a policeman who was still suspicious about the house came along and met Clovis and the cats. While the policeman was oblivious as to why Clovis and his friends surrounded the house, Clovis realized that the policeman wouldn’t stand a chance, so he decided to risk himself to infiltrate the Sleepwalkers’ house.

As the policeman finally entered the house, Clovis discovered that prolonged physical contact on Mary could cause the beast to combusts. Realizing this, he jumped away and called four of the cats from the outside to lunge toward Mary. This worked again where her body began to be engulfed in smoke. Unfortunately, while the first 3 tries to scratch her back succeeded with little to no difficulty, the fourth one made a fatal mistake by trying to scratch her face, resulting in Mary grabbing it and snapping its neck, killing it in the process. The policeman tried to calm Tanya, only for her to run away to the back door. Upon seeing the partially transformed Mary tossed away the dead cat, he shot her in the chest, prompting the cats to jump away in panic, resulting in her revealing her true form.

As the policeman tried to move away from her toward the safety of the outside, the cats surrounding the house noticed the front door opening, prompting Clovis to hiss to try and prompt both humans away. Unfortunately, Mary caught up and threw the policeman into a nearby bear-trap (the only trap that she could prepare as the cats had already surrounded the house). Just as Tanya entered the car, Mary shattered the glass and tried to pull her out. The wounded policeman tried to stop her, only for her to grab him and impale him on the picket fence surrounding the house. As Mary resumed her attempt to claim Tanya’s life, Clovis saw the opening he needed and scratched the back of her head. As he slashed with his claws, he rallied the other cats to do the same.

With many of them now scratching her, Mary was unable to resist; any cats that she tossed away would be replaced by another ready to strike, and her effort was eventually in vain. Just then, one of the attacking cats successfully ignited the flame on her cheeks like a lighter, triggering the chain reaction on her wounds that set her body ablaze. Fortunately, the attacking cats managed to move away for safety, and they watch Mary engulfed by flames and die, but not before she released a final scream: “YOU KILLED MY SON!!! MY ONLY SON!!!”

With no more Sleepwalkers left, all surviving cats decided to return to their home. However, Mary implie that there were still some surviving Sleepwalkers remaining on the earth, so it appears that the war between these species is not yet over. 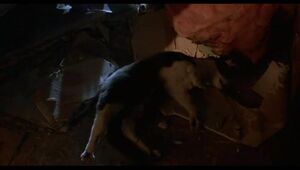 The first reckless cat that killed by Mary 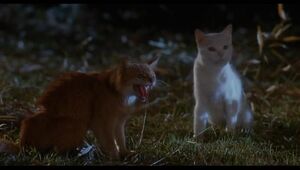 Cats frustated by Mary's unexpected action in ramming her own house just to entered it.
Add a photo to this gallery

Retrieved from "https://hero.fandom.com/wiki/Cats_(Sleepwalkers)?oldid=1885191"
Community content is available under CC-BY-SA unless otherwise noted.