In the DC Elseworlds story "JLA: The Nail" the normally morally ambiguous Catwoman reforms from her criminal ways and becomes the lover and partner of Batman, also becoming that world's Batwoman.

In the alternate reality of "JLA The Nail", Gotham City is an even darker place than ever, with James Gordon having been murdered and Catwoman being savvy enough to recognize that her best chance at survival is if she has Batman's support.  "Surrendering herself" to Arkham Asylum, she is profiled by a psychologist who claims that Catwoman simply enjoys dressing up in costume and playing games of cat and mouse with Batman, which Catwoman brushes off while simultaneously attempting to seduce her psychologist. Though the psychologist expresses skepticism at Catwoman's plan to have a future with Batman, Catwoman is not at all worried.

The session is interrupted by the arrival of the Joker, now with powerful hi-tech gauntlets that allow him to free the other inmates at the Asylum. Installing himself as it's new head, Joker forces the inmates, including Catwoman, to battle one another for his amusement. Catwoman triumphs but refuses to be the Joker's slave, prompting him to attack her. At that moment Batman arrives, but is unable to best the more powerful Joker, who also murders Robin and Batgirl while forcing him to watch.  Recovering just in time to witness this, a horrified and disgusted Catwoman attacks the Joker with the intent of killing him for his atrocity, only to be knocked out by him. After an enraged Batman kills the Joker, he flees from Arkham Asylum with Catwoman.

Catwoman recovers in the Batcave, and learns from Alfred that Batman has become catatonic following his killing Joker.  With Alfred's help, Selina is able to help Bruce come to terms with both the deaths of his two disciples and also his breaking his rule of never killing.  After the two learn that the Justice League has been captured, Batman resolves to rescue them. Selina insists on accompanying him, also making it clear to Bruce that she'd rather die with him than live without him.  The two embrace and afterwards Selina becomes Batwoman and helps Batman liberate the Justice League.

After the death of Jimmy Olsen, the mastermind behind the conflicts of the story, Lois Lane notes in her recording of the events that though Batman retires from the Justice League and seems to be punishing himself for his breaking his one rule, with Catwoman at his side his life is perhaps a little less dark.

Batwoman in "JLA Another Nail"

Batwoman in action alongside her lover and the Justice League

Catwoman seduces her psychologist while explaining her desire to go straight 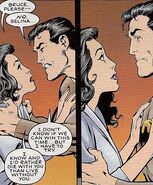 Selina confesses her love to Bruce

Selina and Bruce embrace
Add a photo to this gallery
Retrieved from "https://hero.fandom.com/wiki/Catwoman_(JLA:_The_Nail)?oldid=1774068"
Community content is available under CC-BY-SA unless otherwise noted.