NOTE: This article is about the incarnation of Catwoman from the Reevesverse. The mainstream version can be found here: Catwoman (DC)

Taking care of her cats.

Selina Kyle, also known as Catwoman or The Cat, is the anti-heroic deuteragonist of the 2022 film The Batman. She is a cat burglar who serves as the occasional enemy and occasional ally of Batman.

She is portrayed by Zoë Kravitz, who also portrayed Leta Lestrange in Fantastic Beasts and Where to Find Them and voiced Mary Jane Watson-Parker in Spider-Man: Into the Spider-verse.

Selina was the daughter of Maria Kyle, who worked for the infamous crime lord Carmine Falcone, with Falcone in fact being the father. However, neither Selina nor Falcone were made aware of this. Selina would recall being forced along as her mother worked, and Falcone leering at them both. When Selina was seven, she was told the truth about her father. However, shortly after, Falcone murdered Maria.

After her mother's death, Selina grew up a wandering orphan, stealing to survive and becoming a talented acrobat and cat burglar, even dealing in drugs to make a living. She eventually got a job as a waitress at the Iceberg Lounge, where she met and befriended Annika Kosolov. She ended up becoming roomates with Annika, and also adopting a number of stray cats.

When Annika, who was part of an affair with the corrupt mayor Don Mitchell Jr., returns to their apartment in hysterics, Selina agrees to steal back her passport, which the mayor confiscated, so they may run away. She dons a mask and goes to break into the safe, despite the mayor having been murdered by the Riddler shortly before. Batman also appears at the crime scene, catching Catwoman breaking into the safe. After a brief skirmish, Batman agrees to help Catwoman with her problem. However, upon returning, Annika has disappeared. Batman agrees to help Catwoman find her, knowing that she plays a part in solving the Riddler's murders.

Selina goes undercover as an exotic dancer in the underbelly of the Iceberg Lounge, where she witnesses Gotham elite socializing with the criminals. When Falcone appears and Batman questions her relationship with him, Selina grows upset and bails on the operation.

Later, Batman and Commissioner James Gordon track down the Penguin to a drug deal, believing him to be an informant. Catwoman also arrives attempting to steal money from the deal and accidentally giving Batman and Gordon's presence away. As a fight ensues, Catwoman is horrified to find Annika's corpse in one of the car trunks. Distraught, she steals a single bag of money and leaves.

Selina figures out that Falcone was the informant, and strangled Annika to death for learning of this. She informs Batman and Gordon, and tries to convince them to help her kill Falcone. When they refuse, she shares a kiss with Batman before leaving to go and murder her father and take revenge, attacking him with a gun. Batman subdues her and convinces her that killing him will not help. She reluctantly agrees, but is upset when the Riddler shoots Falcone with a sniper rifle. She leaves in anger.

Later, Gotham is flooded by bombs planted by the Riddler. Though Batman saves a lot of people, Catwoman deems Gotham beyond saving. She visits her mother's grave one more time, with Batman coming to her and asking her to stay and help him. She declines, and the two go their separate ways, with Selina leaving Gotham and Batman staying to help it. 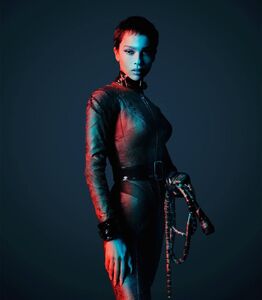 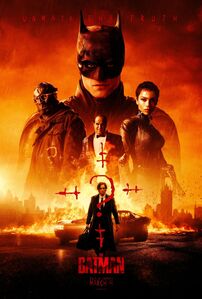 Catwoman on the international poster of The Batman. 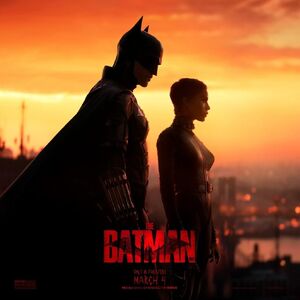 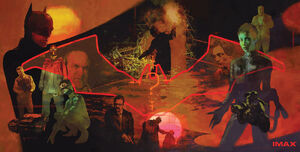 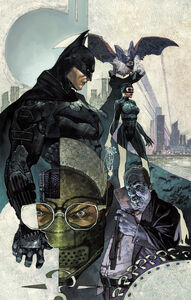 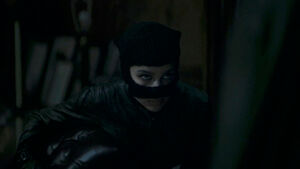 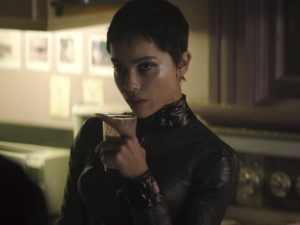 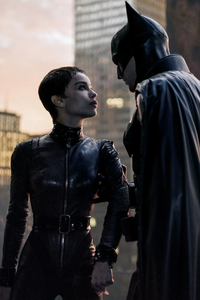 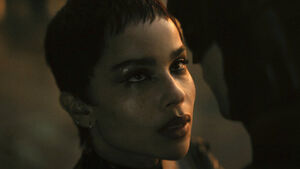 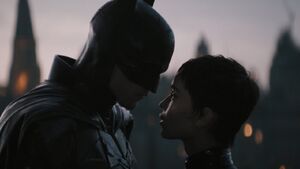