That Boy (by Duke Igthorn)

Going on adventures with Cubbi and Princess Calla

Cavin is the main human hero and one of the two main human characters from Disney's 1985-91 television series Disney's Adventures of the Gummi Bears. He is a page of King Gregor who serves under his highest-ranking knight Sir Tuxford in the kingdom of Dunwyn, who dreams to one day become knight just like his superior.

He is voiced by multiple people over the course of the series. He was voiced by Christian Jacobs in the 1st season, Brett Johnson in the 2nd season, David Faustino in the 3rd season, Jason Marsden in the 4th and 5th season, and R.J. Williams in the final season.

Cavin is a page to Sir Tuxford. His only known family member is his grandfather, Sir Gawain, a retired knight and noble. Cavin is one of the few people to know of the Gummi Bears' existence, and becomes an ally to them.

Cavin is brave, but also awkward. His biggest dream is to one day become a knight. Throughout the series, he is frequently picked on by another, older and arrogant squire named Unwin, who treats him like a young child, however Cavin has proven to be more professional than Unwin in many cases. He is shown to be best friends with Cubbi, as they both share dreams of becoming knights someday. He is also close friends with Princess Calla, whom he is hinted to hold romantic feelings for in the series.

In the series premiere, Cavin wears a Gummi Medallion given to him by his grandfather Sir Gawain. He ends up stumbling into the home of the Gummi Bears by accident after an ogre attack, and convinces the household to assist in the defense of Dunwyn from Duke Igthorn. They initially decline, stating that they aren't who they used to be, causing Cavin to lose hope and deciding to take on Igthorn himself. He is soon captured, but then freed by the Gummis after they learn from the great book that they must protect the good and battle the evil. They end up foiling Igthorns plan of destroying Dunwyn with a catapult and saving the kingdom. Cavin leaves his Gummi Medallion with Zummi, which allows the Gummi Bears to discover much of their lost heritage.

Cavin becomes a close ally to the Gummi Bears, while keeping their existence a secret from other humans (although other humans such as Princess Calla and his grandfather Sir Gawain soon learn of their existence by other means as well). He also frequently tries to put a foil into Duke Igthorn's plans of capturing Dunwyn throughout the series.

In "Up, Up, and Away" he agrees to help Cubbi Gummi prepare for his trip to New Gumbrea by assisting in the repair efforts of Chummi Gummi's airship. Despite doing a noble cause, Cavin is eventually caught by Unwin when the arrogant squire catches him "stealing" rope from the royal storage room. As a result, Sir Tuxford demotes Cavin to "Kitchen Helper" whilst stating "a thief will never become a knight" and essentially erasing away Cavin's dreams. Cavin becomes angry at Cubbi and accuses him for getting him into trouble and resents their friendship, but after seeing Duke Igthorn hijack the airship, he feels a need to help his friend and Chummi Gummi. Cavin manages to board the vessel and defeat both Toady and Duke Igthorn whilst freeing Chummi Gummi and Princess Calla (whom Duke Igthorn had kidnapped), before returning with the Princess to Castle Dunwyn where he is given a hero's welcome and is restore back to full page status. He later attend's Cubbi's knighting ceremony when his friend is knighted as the secret protector of Dunwyn.

In "Ogre for a Day", he decides to infiltrate Drekmore by disguising himself as an ogre named Umma using a magic spell Zummi casted on him, but is warned "not to get too used to it" as he could potentially begin behaving like an ogre sooner or later and betray the Gummis. Cubbi decides to check up on his best friend soon after he enters Drekmore, but gets captured by Cavin, coming to the belief that Cavin has fully transformed into an ogre. This is proven false as Cavin sabotages Igthorn's plan of kidnapping King Gregor, and attempts to save King Gregor's life by returning him to Dunwyn. His acts are soon discovered by Igthorn, who captures Cavin and orders him to be punished (presumably by an ogre's worst nightmare of being bathed), however Zummi manages to free Cavin and transforms him back into a human, scaring the ogres and allowing Cavin to stop Igthorn. He succeeds by using Gummiberry Juice to save King Gregor and sending Igthorn and his ogres flying back to Drekmore. Cavin is then hailed as a hero by not only the King, but also by the kingdom as a whole, although he is not dubbed a knight, he does receive a kiss from Princess Calla.

In the two-part series finale "King Igthorn", Cavin manages to escape imprisonment after Duke Igthorn successfully overthrows King Gregor and takes over his kingdom. He tells the remaining Gummis of what has happened and leads a rebellion against Igthorn to liberate Dunwyn and restore Gregor back onto the throne. They end up succeeding, and presumably drive Igthorn out of Dunwyn permanently. 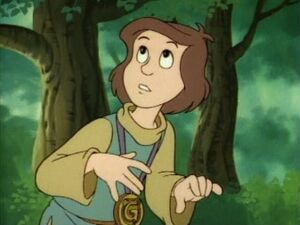 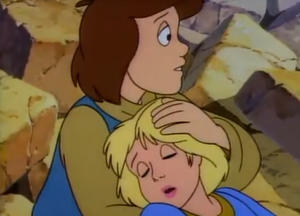 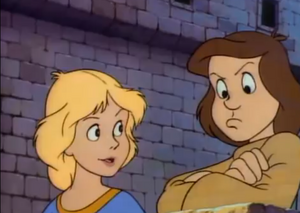 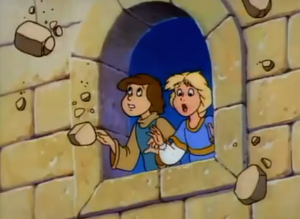 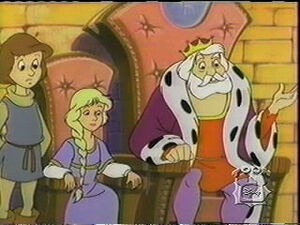 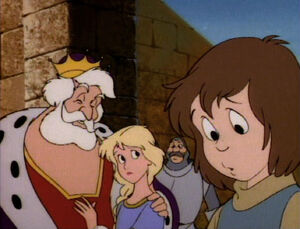 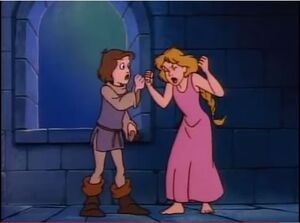 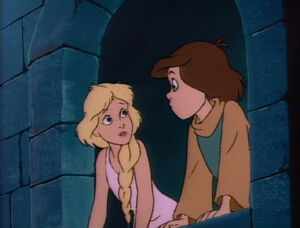 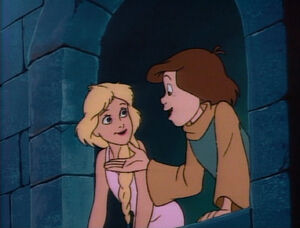 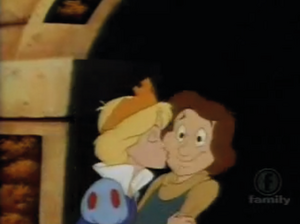 Cavin receiving a kiss from Princess Calla for his heroism.