Member of the 7th Platoon

Skilled use of a lance
Horseback riding

Cecil is a young woman with short pink hair and matching eyes. She wears a white bandana and pink upper armor with gold accents over a darker pink, long-sleeved shirt. She also wears magenta pants and pink armored boots with gold accents.

Cecil is a very loyal woman with a strong desire to prove herself worthy as a knight. Her sense of duty helped her to persevere during her training while the rest of the 9th Platoon gave up. She also values loyalty in others, as demonstrated by her inability to forgive Katarina for betraying Marth and the 7th Platoon until the latter showed that she truly changed. Cecil does not appreciate when men underestimate her skill due to her gender, but while she has used this irritation to constructively fuel her training, it has also caused her to react badly to innocuous actions from her friends, such as Roderick offering her a seat during a meeting. However, she is self-aware of her flaws, and will apologize to people like Roderick for poor behavior.

One year after the end of the War of Shadows, Cecil arrived at Altea castle during the latest enlistment of recruits. The veteran knight and tactician Jagen ordered each recruit to pair up and engaged in mock battle with seasoned Altean knights. After successfully completing their first trial, Cecil and her partner were placed in the 9th Platoon. Over the next three months of strenuous challenges, the hundreds of recruits dwindled down to 20. Among those who failed were the majority of the 9th Platoon, who deserted during a trial and left Cecil the sole member. However, she soon met Katarina of the 7th Platoon, who offered her a position in the group and asked her to bring them some new steel-grade weaponry she acquired. Cecil arrived with the cargo in time for the platoon's mock battle against Draug or Ogma. The 7th Platoon successfully bested their opponent, and Cecil bonded with members Luke, Roderick, Ryan, and the leader Kris.

Ultimately, the 7th Platoon overcame their final trial and received their final score, which varied based on their performance in each mock battle. Regardless of the exact score, the platoon did well enough to graduate to full knighthood. Thankful for Kris' leadership, Cecil had Katarina give them a headband identical to hers as a gift. On the day of the 7th Platoon's graduation, an unknown number of assailants besieged Altea castle. It was then that Katarina revealed her true identity as Reese, an assassin sent to kill Marth, and that the source of the weapons Cecil picked up were her accomplices. Shocked, the rest of the platoon fought to defend Marth's life particularly Kris and Cecil. Together, they successfully injured Reese and forced her to retreat. Despite being the target, Marth generously believed that Reese's actions were due to being the victim of unfortunate circumstances. After the fight, a heartbroken Cecil and Kris conversed, Kris choosing whether or not to keep the headband. Either way, the two promised to bring Reese back and complete the 7th Platoon once more.

After officially becoming an Altean knight, Cecil's first real mission took her to Grust, which was occupied by the newly formed Archanean Empire. Archanea's first Emperor and Marth's good friend, Hardin, requested that the prince help suppress an uprising against Grust's occupying leader, General Lang. As the Holy Empire of Archanea was a more powerful country than Altea, Marth was obligated to obey Hardin's request; he departed with his advisor Jagen, many seasoned knights, and the 7th Platoon. In Grust, Marth, Cecil, and the rest of Marth's army grew to despise Lang for his oppressive nature. Furthermore, the leader of the rebellion was General Lorenz, a great ally of Marth, which stoked Marth's suspicions about the whole affair. Cecil was with Marth when the latter confronted Lorenz, who revealed that the Archanean Empire's treatment of the region was abhorrent, and he launched the rebellion to protect Grust's heirs Yubello and Yumina. Lorenz succumbed to wounds he received in a previous fight, his last words warning Marth of Hardin's corruption.

After taking the royal siblings into custody, Lang demanded that Marth stop a coup in Macedon. Cecil accompanied Marth as he fought to save Macedon's ruler and old ally Princess Minerva. While Marth's army was successfully quelled the coup, they could not find the princess, as she was previously rescued by her brother Michalis. Returning to General Lang, Marth was instructed to retrieve the royal heirs, who were rescued by the mercenary Ogma while the Altean army was in Macedon. Having enough of Lang, Marth declared that he would no longer follow any more of the general's orders. Lang considered Marth's defiance an act of war, but fled when Jagen challenged him. Jagen then notified Marth that his sources found assassins connected to the attempt on Marth's life in Macedon's northern mountains. Cecil was among those in Marth's army who help prevent the slaying of the cleric Wrys. After Wrys' rescue, Roderick helped Marth search for Ogma and the Grustian heirs; the three were found surrounded by bandits. Marth's forces successfully rescued the three, but were interrupted by the arrival of Caeda, who claimed that the Archanean Empire launched a surprise attack on Altea; she only escaped thanks to Marth's sister Princess Elice staying behind to fend them off.

Marth decided to liberate the Grustian people, and Cecil assisted with the taking of Lang's headquarters, Olbern Keep. Once Lang was finally dealt with, Marth freed his old ally Bishop Wendell from imprisonment. Wendell entreated Marth to reconstruct the mystical Starsphere, as its shattering threatened the very integrity of the world. On the way to Chiasmir's Fane of Raman, where the Starsphere shards were likely held, Marth's army was ambushed by mercenaries. Marth and Kris quickly realized that these mercenaries were hired by one of Reese's accomplices, the masked assassin Legion. The following battle resulted in Legion's (or rather, one of his clone's) deaths, and Marth's army reached to the Fane of Raman. It quickly became apparent that no shards would be found in the Fane, as it was plundered by a band of marauders. While attempting to return to Archanea via the Chiasmir Bridge, Marth's army was confronted by Emperor Hardin himself, who made plain his intention to punish all dissent. While Cecil served as part of the rearguard, Kris attacked the deranged Emperor, discovering an impenetrable shield of dark magic that made him invincible. They told Marth that he and the vanguard must escape on a ship while the rearguard held off the Archanean army. Marth refused to leave any of his retinue behind, but Kris insisted that the rearguard would regroup with him later. Jagen insisted that Kris was more than capable, finally convincing Marth to flee Hardin. Kris, Cecil, and the rest of the rearguard successfully evaded Hardin, though how easy this was depended on Kris' luck. They reunited with the vanguard in the magic city of Khadein, to Marth's joy.

Marth sought the School of Khadein, determined to find magic that could counteract Hardin's shield. He also discovered his old ally Horace in the city, threatened by Legion and a horde of his clones. Cecil assisted in the ensuing battle against the clones, which resulted in the true Legion's death. After the fight, the White Sage Gotoh magically contacted Marth, explaining that both Hardin's protection and his fall from grace were caused by the powerful Darksphere. He requested that Marth journey to the Ice Dragon Temple, where he waited with the Lightsphere, which was capable of countering the Darksphere's magic. Marth's army traveled to the temple through Anri's Way, a path named for Marth's ancestor who traversed it a century ago. Roderick was among those who helped collect Starsphere shards during their trek. Near the end of their journey, they were caught in a raging blizzard; Marth's ally Athena spotted enemies in the flurry, thwarting an ambush by the assassin Clarisse. The ensuing battle left Clarisse fatally wounded, and Marth's army reached the Ice Dragon Temple, where Gotoh bequeathed the Lightsphere to Marth, reconstructed the Starsphere, and magically teleported everyone back to Altea.

Eager to liberate his homeland, Cecil helped Marth kill any Archanean occupiers who menaced them. After successfully reclaiming Altea castle, Kris sensed more enemies hidden within, which turned out to be a band of assassins led by none other than Reese. As Cecil helped fight their assailants, Reese told Kris about a wonderful dream she had, where she served as a Royal Guard with them, and both helped and were loved by the populace. For their part, Kris refused to attack Reese, despite the latter insisting she would kill them. Kris claimed that Reese belonged to them and Marth, and that they could still atone for their sins. Overwhelmed, Reese finally stopped fighting and defected to Marth's side, reuniting the 7th Platoon once more. Marth "punished" Reese by ordering her to find a path in life and thereby atone, while Reese adopted the name Katarina for good. Gotoh contacted Marth again, alerting him to the revival of his old nemesis Gharnef. The Dark Pontifex abducted Princess Elice after Altea's fall, and used the assassins dogging Marth to abduct both Minerva and Michalis' sister Maria and the Macedonian cleric Lena. Gotoh warned Marth that Gharnef was likely planning to kidnap Hardin's wife Nyna as well.

Marth's army, including Cecil, marched upon Archanea to prevent Nyna's capture, only to learn from the Emperor that he personally gave her away to Gharnef ages ago. After a long campaign through the Holy Empire, Hardin finally fell, but was freed from the Darksphere's influence. With his dying breath, Hardin regretted all he had done and begged Marth to save Nyna. Gotoh magically warped to Marth and revealed that Gharnef brainwashed the four maidens before taking them to the Dragon's Table to assist in the resurrection of the Earth Dragon Medeus. Marth and the 7th Platoon also learned the location of the assassins' base of operations: an orphanage in the Archanean mountains. Katarina told them of a shortcut to reach the place. Inside the orphanage, Katarina explained to Marth and her fellow platoon members of terrible upbringing at the hands of Eremiya, including confinement in darkness, but now thanks to people like Kris, she finally had a mind of her own. Together, Marth's forces mortally wounded Eremiya, thus preventing the victimization of any more orphans like Katarina.

Upon reaching The Dragon's Table, Cecil helped Marth and the rest of the army defeat Gharnef. The revived Medeus, now a powerful Shadow Dragon, awaited them in the next room with the four maidens, who he intended to sacrifice should he be slain by Falchion. However, the were released from their trances by their loved ones, allowing Marth to kill him for a second time, ending the War of Heroes. Upon the war's conclusion, Cecil continued to serve in the 7th Platoon as a proud paladin of Altea.

Cecil's portrait in Fire Emblem: Mystery of the Emblem.

Cecil's portrait in Fire Emblem: New Mystery of the Emblem. 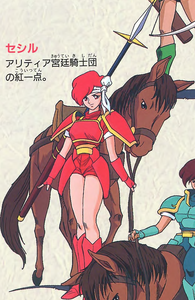 Official artwork of Cecil from Fire Emblem: Mystery of the Emblem. 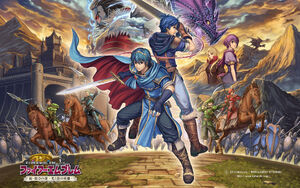 Official artwork featuring Cecil, other members of Marth's army, and various antagonists for Fire Emblem: New Mystery of the Emblem.