spending time with her childhood friend, James and his daughter

Get rid of Adrian Griffin (succeeded)

Cecilia "Cee" Kass is the main protagonist of the 2020 film The Invisible Man. She is a woman who wad caught in a toxic relationship with optical scientist Adrian Griffin, and later escaped from his grasp. Despite escaping, Cecilia is stalked by Adrian, and attempts to prove that he is still alive.

She was portrayed by Elisabeth Moss, who received universal acclaim and praise for her performance. Moss also played Kitty Tyler in Us and Offred in the Hulu series, The Handmaid's Tale and Don Draper's secretary Peggy in Mad Men.

Cecilia was born to unnamed parents, and had a sister named Emily before the events of the film. During her childhood, Cecilia and Emily befriended James Lanier, who would later become a detective. At a party, Cecilia met Adrian Griffin, a brilliant and wealthy optics engineer, and the two later began dating. Cecilia became trapped in a violent, emotionally and physically abusive relationship with Adrian, who once told her that he would always be with her no matter where she went. Adrian also wanted to have a child with Cecilia, but she took birth control pills as having a child would keep her in Adrian's grasp.

Cecilia then decided to leave Adrian, drugging Adrian with Diazepam and escaped with the aid of her sister. She was taken to James and hid at his home with his teenage daughter, Sydney, who she became close to. Two weeks after escaping, Adrian seemingly commits suicide, and leaves Cecilia five million in his will handled by his brother, Tom.

As Cecilia tries to move forward, she is plagued by several unexplained experiences. During a job interview, she faints after finding her portfolio's contents removed and is taken to the hospital. Later, the doctor calls and says they found high levels of Diazepam in her system. Shortly after returning home, Cecilia finds the same bottle she drugged Adrian with, which she dropped during her escape, in her bathroom.

She arranges a meeting with Tom and James, insisting that Adrian faked his death and used his optics expertise to become invisible in order to torment her, but gets rebuffed. Cecilia turns to her sister, but Emily refuses to acknowledge her after receiving an email from Cecilia's account stating she never wants to see her again. Later, she is comforted by Sydney, but Sydney is hit by an unseen force, leading her and James to assume Cecilia did it. While a furious James rushes his daughter out of the house, Cecilia tries a number of tactics to catch the figure. After finding Adrian's old phone in the attic and covering the figure with paint, she ends up in a violent struggle before escaping to Adrian's home to investigate.

In his lab, she finds a suit that confirms her suspicions. After hiding it in a closet, the invisible figure attacks again, so Cecilia flees and contacts Emily. The pair meet in a restaurant, though as Cecilia begins to tell her what she found, the invisible figure slits Emily's throat with a knife and places it in Cecilia's hand, framing her for the crime.

Remanded to a mental hospital while she awaits trial, the staff informs Cecilia that she is pregnant. Tom visits her and offers to get her charges dropped if she agrees to "return to him" and raise the child, implying that he helped his brother stage his suicide while revealing Adrian tampered with her birth control to ensure she became pregnant. Cecilia refuses to take the deal and steals a pen from his briefcase. That night, she uses the pen to pretend to commit suicide to draw the invisible figure out. When the figure tries to stop her, she stabs him repeatedly, causing the suit to malfunction. The security team arrives, but the invisible figure violently incapacitates them before fleeing the hospital, with Cecilia in pursuit. Promising not to harm her because of her pregnancy, the figure instead threatens to attack those she loves.

Cecilia races to James' house, where she finds the invisible figure attacking him and Sydney. She manages to shoot the figure after spraying him with a fire extinguisher, but when she unmasks him, she finds Tom in the suit. Police find a captive Adrian alive at his house, tied up in his basement and claiming Tom held him prisoner. Cecilia quickly disputes this, insisting the brothers must have shared the suit, with Adrian sending Tom to the house knowing what would happen.

In an attempt to get Adrian to confess, she meets him at his house to discuss her pregnancy while James listens in on a wire. She agrees to mend their relationship, but only if he confesses to being the invisible figure. Adrian insists Tom did kidnap him, claiming that the experience changed his outlook on life and how he treated her in their relationship. When she begins to cry, Adrian alludes to former abuse using similar phrasing to that of the invisible figure. Smiling, Cecilia departs to use the restroom. Moments later, the room's security camera captures Adrian seemingly committing suicide. Cecilia returns and, apparently distraught, calls the police. Out of the camera's sight however, she silently taunts Adrian; having retrieved the spare suit she hid earlier to kill him.

When James arrives and asks what happened, she confirms what the camera saw. He spots the suit in her bag, but accepts her story and allows her to leave. Relieved that she's finally free from Adrian, Cecilia leaves the house with the suit. 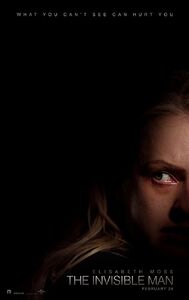 Cecila on the first poster of The Invisible Man. 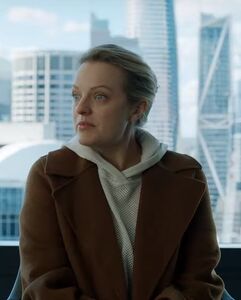 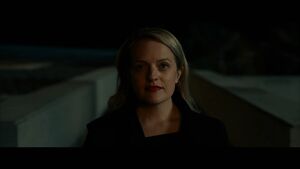 Cecilia smiling, free of Adrian after killing him.