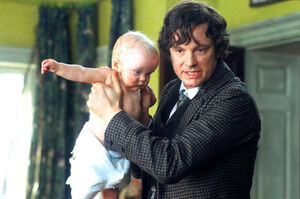 Cedric Brown is the hero of Nanny McPhee.

He is a strict but caring father who does all he can to find a nanny for his seven naughty children. Cedric cares very deeply for his family but is burdened by the death of his wife. He must also find a new wife to pay back the wicked Aunt Adelaide with the dowry. The story begins with Cedric trying to find a new nanny after his children drove off seventeen of them. A new nanny comes to his house - the magical Nanny McPhee, who gives the children five lessons they take the time to learn:

Cedric is due to be married to a selfish and wicked woman named Selma Quickly. He is unaware of how vile she is until the children crash the wedding. They save him and he saves them from Selma in return. Cedric marries the family's caring scullery maid, Evangeline, saving their home and bringing their family back together.

He was played by Colin Firth.

Retrieved from "https://hero.fandom.com/wiki/Cedric_Brown?oldid=2128598"
Community content is available under CC-BY-SA unless otherwise noted.