Harry Potter and the Prisoner of Azkaban

Student of Hogwarts School of Witchcraft and Wizardry

Harry Potter and the Goblet of Fire

Cedric Diggory is a Hufflepuff student at Hogwarts School of Witchcraft and Wizardry, who participated in the Triwizard Tournament alongside Harry Potter. When all the students except several wear Potter Stinks badge, he wasn't fond of it and asked his classmates and the other students not to wear them and stop abusing Harry.

When Draco Malfoy who attempts to curse Harry is being transformed into a ferret by Alastor Mad Eye Moody who is actually Barty Crouch Jr in disguise, he laughed at Draco's expense and misfortune. He and Harry were tied in the first place. Cedric however was killed by Peter Pettigrew who betrayed the Potters and was brought back to Hogwarts by Harry, who escaped Pettigrew and Voldemort. Cedric's death was so emotional and tragic that many students and teachers at Hogwarts believed Harry's claim that Voldemort has returned. After his death, Cornelius Fudge tells his father Amos Diggory that his son died of accident, but Amos was against this and his son didn't die of accident and there are no fatal wounds on his body.

When Fudge finally sees the Dark Lord for himself, he's forced to admit the truth that Voldemort has returned and that Cedric was murdered, as the Wizarding community ignites a protest against Fudge demanding his resignation. His death is avenged when Barty Crouch Jr, Peter Pettigrew and Voldemort are finally killed. 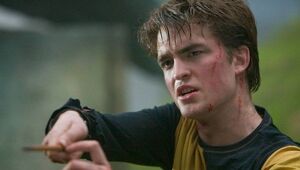 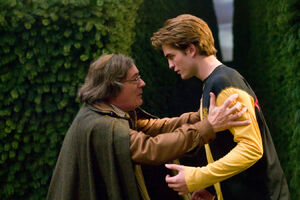 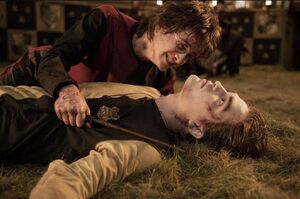 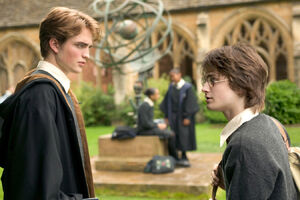 Harry and Cedric in the school courtyard 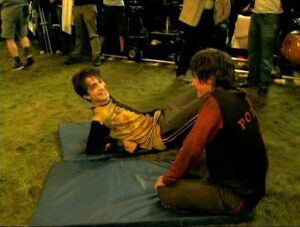