Celebi is the titular protagonist of Pokémon 4-Ever and a Grass/Psychic-type Pokémon. Celebi is a Mythical Pokémon that has the ability to travel through time.

Celebi: Voice of the Forest

While trying to escape from a Pokémon Poacher, Celebi stumbled across Sam Oak, who was out looking for Pokémon. Just as the hunter was about to capture the Pokémon, it time traveled with Samuel Oak to escape and ended up 40 years into the future: in the time of Ash and his friends.

However, there was still danger in the present, this time from a Team Rocket member known as the Iron-Masked Marauder. Using a unique Pokeball called a Dark Ball (which makes Pokémon—both wild or already owned by someone else—evil and power-enhanced), the Iron-Masked Marauder captured Celebi to use for his own evil plans, and the Pokémon was put under his dark control. With the help of Ash and the others, Celebi was set free from the Marauder. However, it looked very grim for Celebi, who wasn't able to heal itself in the Lake of Life where it had healed before because the lake was too polluted. Everyone weeps for the loss of their dear friend.

Suddenly, many other Celebi from the past and future came to heal their friend. And Celebi revives, to everyone's delight. But the reunion is short-lived when suddenly, the Marauder arises from the lake and grabs Celebi and attempts to fly away with it on his jetpack. Ash grabs onto his leg and orders Pikachu to Thunderbolt the evil poacher's jetpack, causing it to explode, sending all three plummeting several meters toward the forest floor. While the Marauder continues his plummet to Earth, Celebi saves Ash and Pikachu.

With the Marauder defeated once and for all, Celebi is able to go back to the past and take Sammy with it.

Celebi made a cameo in the film at one point during the sequence involving Fook Yu and Fook Mi. Celebi's cameo was cut of the film possibly due to not having anything to do with the main plot. However, Charmander and Pikachu made brief appearances in the film.

Young Sam Oak encounters Celebi on the run from a Pokémon Poacher.

Under the Lake of Life

Ash and Sammy giggling with Celebi.

Celebi captured and electrocuted by the Iron-Masked Marauder

Dark Celebi brainwashed by the Marauder 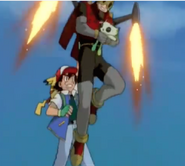 Ash & Pikachu's final confrontation with the Marauder to save Celebi 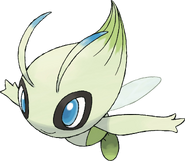 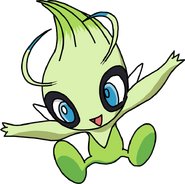