To spend time with Mike.

Celia Mae is a major character in Monsters, Inc. She is the receptionist of Monsters, Inc. and Mike's girlfriend; at first, they spent her birthday at Harryhausen's until it got ruined by Sulley's accident of letting Boo in the monster world. She helped them out by stalling Randall with a lie to the co-workers that Randall broke the all-time scare record.

She also made a cameo appearance in Monsters University as a photo in Mike's locker.

She was voiced by Jennifer Tilly who also played Bonnie Swanson, Grace and Tiffany Ray in the Child's Play series. In the Japanese dub from the movie, she was voiced by Urara Takano.

In the first film, Celia is celebrating her birthday, so Mike invites her to a Japanese restaurant called Harryhausen's (named in honor of legendary stop motion animator Ray Harryhausen), but due to Boo being in the restaurant, the place is decontaminated by the CDA. One device that is made to make a large dome that would get rid of fatal germs, but could harm people without CDA armor, which is why Celia comes back to work the next day with serious injuries, and has a white cone/protector around her neck. She is initially upset with Mike, and she complains about how the date was ruined, but when she sees Mike, Sulley, and Boo in danger of being captured by Randall for devious purposes, and when Mike reassures his love for her, she saves Mike by subduing Randall with a crowd after she feign-announces him breaking the all-time scare record. She is seen again at the end of the film, having fully recovered and made amends with Mike, and tells him that a box full of magazines has just arrived. Both she and Mike are surprised to see that Mike has made the cover of the magazine. She kisses him and her hair (snakes) tickles his face. Mike seemed to enjoy the tickling and kissing from Celia and her snakes.

The year before the film takes place, she and Mike are supposed to have won the 7-legged race at the year's company picnic.

She also appears in the company play "Put That Thing Back Where It Came From or So Help Me" that stars her boyfriend, who has also written, directed, and produced the play.

While Celia is absent from the prequel, a photo of her is seen in Mike's locker at Monsters, Inc. This could imply that Mike first fell in love with Celia when he and Sulley started working at Monsters, Inc. after being kicked out of MU. 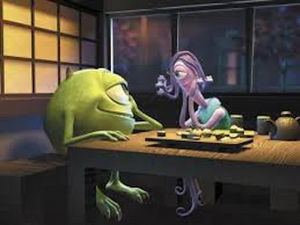 Celia on a date with Mike Wazowski.