Celica is one of the main protagonists featured in Fire Emblem Gaiden and its remake, Fire Emblem Echoes: Shadows of Valentia. She is voiced by Erica Lindbeck in the remake.

Celica is a young woman around 17 with long red hair with a white and gold headband and red eyes. She is shown wearing a white dress with red details a black skirt underneath her dress. Her boots are white and her gloves are white and black. As a princess, she wears her mother’s circlet instead of the headband.

Celica is shown to be kind, compassionate and caring. She doesn’t like fighting but has no other option but to do it.

Prior to the events of her game, Princess Celica of the Zofian royal bloodline had been taken in by Mycen at an early age to protect her from Desaix, who was responsible for the murders of many royal children. She was eventually found in Ram Village, meaning she had to be relocated to the Novis Priory. Celica made friends with Mae, Boey, and Genny, informing them of her quest at the Temple of Mila to discover why the crops have failed in the past three years. Before going there, she stopped by the castle of Zofia and met Alm of the Deliverance. As she contemplates on how to solve the problems in Valentia via peaceful ways, she is interrupted by Alm's ideas of there not being one due to Rigel already having started invasions without any chances for negotiation with Emperor Rudolf. Frustrated from the differences in their concepts and Alm's unwillingness to cooperate, Celica departs from the castle. On the way to the Temple of Mila Celica comes across the self-proclaimed pirate king Grieth, who had taken several hostages, including the youngest Whitewing sister Est. After arriving at Mila's temple and striking down Mikhail, one of Duma's priests, she discovers that Mila had been sealed by Rudolf and thus headed toward the tower of Doma. However, she sprung into Jedah's trap that would require her to sacrifice her soul to Duma. Reluctantly, Celica agrees and travels deeper into the tower. She would not see Alm again until he obtains the sword where Mila was sealed, Falchion, rescuing her from Duma's clutches at Duma's altar. Celica apologizes to him for abandoning him at Zofia castle, to which Alm forgives her, and with their combined forces they overwhelm the priest and defeat Duma, ending the war between him and Mila once and for all. Together as a couple, Alm and Celica become the rulers of Valentia as a unified nation.

DLC artwork of Celica as an Einherjar in Fire Emblem: Awakening 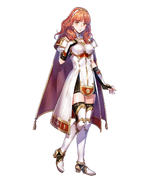 Retrieved from "https://hero.fandom.com/wiki/Celica?oldid=1951252"
Community content is available under CC-BY-SA unless otherwise noted.