Eating a lot food (including potato chips, meats and ramen)

Chōji Akimichi (秋道チョウジ, Akimichi Chōji) is one of the main supporting characters of the Naruto anime/manga series and the Boruto: Naruto Next Generations anime/manga series. He is one of Naruto's best friends since childhood (along with Shikamaru). He is a chūnin-level shinobi of Konohagakure's Akimichi clan and a member of Team Asuma. Along with his team-mates, he is part of an Ino–Shika–Chō trio, just like their fathers were before them. Chōji and his father were later seen talking on the roof of a building while Chōji was still upset over the way he was treated by the other children, saying the Akimichi were fat and stupid. His father told him that few people have a heart as kind and caring as his, and one day he would meet someone who would see that in him and respect him for it, and that eventually they would be the best of friends. Soon after, Shikamaru arrived. Chōji recognised him as the one who had defended him earlier, and asked Shikamaru why he wasn't playing the game, to which Shikamaru responded that it was too troublesome. He then told Chōji that he liked to come up there to watch the clouds and that Chōji happened to be sitting in his spot. Chōji moved over to give him space.

Chōji is a very kind, polite and caring boy. These characteristics are said to be his greatest strength by both his father Chōza and his former teacher Asuma Sarutobi while his greatest weakness was his lack of self-confidence. He is easily motivated by the prospect of food, and becomes highly agitated when somebody calls him "fat" (he refers to himself as "big-boned", "chubby") Asuma would say that he is just "pleasantly plump". However, he does not hide his love for food and his near constant hunger is also an annoyance to his team-mates, as eating often comes before other necessities such as stealth and teamwork. Food can also make him over-react about silly things, such as who gets the last chip, or when Akamaru tried to take his chips, and he refuses to let anyone else eat the last chip in the bag, even in battle-situation. Chōji also tends to eat a lot when he's angry. Since Part II of the series, however, his eating habits are more controlled and no longer interfere with his duties as a shinobi.

Chōji has a long-standing friendship with Shikamaru. The two have complete trust in each other, with Shikamaru being one of the few people to look past Chōji's lack of athleticism, and see that he had a kind heart; recognising Chōji's true strength. Because of this, Chōji has unwavering faith and loyalty to Shikamaru and, if necessary, would give his life for him, which nearly happened during his battle with Jirōbō. Chōji also cares deeply for his mentor, Asuma, and had a difficult time in fighting him during the Fourth Shinobi World War, due to not wanting to hurt his own teacher, even when Asuma called Chōji "fat" in an attempt to anger him.

As stated by his father and teacher, Chōji greatly lacked confidence in himself and his abilities which often times hindered his actions or even progression in some aspects.[8] During the Fourth Shinobi World War, however, Chōji was able to overcome these issues and become one of the major contributing factors in the Allied Shinobi Forces turning the tide of the battle in their favour.

Chōji has spiky, brown hair, swirl marks on his cheeks, and like the rest of his clan, he has a more robust physique. Since his childhood, he has always been quite husky, which is a necessity in his clan to perform their techniques since they convert calories to chakra. During Part I, Chōji wore black shorts, a long white scarf, a short-sleeved, green haori, over a light-green shirt (depicted as white in the anime) with his clan's obligatory kanji for "food" (食, shoku) on it, small, hoop earrings, and his legs and forearms were wrapped in bandages. His forehead protector was styled in a manner that allowed two tufts of hair to poke out at each side.

During Part II, he sports a red suit with plated armour on his torso, arms, and upper legs, which is seemingly the standard attire for shinobi in his clan. On the front of his chest armour is the obligatory kanji for "food" (食, shoku). His brown hair has grown much longer reaching to his waist and he also changes his earrings from hoops to the studs that he got as a gift from Asuma. During the Fourth Shinobi World War, he wears the standard Konoha flak jacket over his outfit. After Chōji uses the Multi-Size Technique, he gains two extra markings underneath both his eyes as well.

In The Last: Naruto the Movie, two years after the Fourth Great Shinobi War, Chōji's overall appearance has slimmed down somewhat, being more plump as he considers himself. He has cut his hair short and sports a small chin goatee. His outfit is mostly the same, but wears larger wrist-guards and his boots reach his calves. Years later, Chōji's hair grew shoulder length and slicked back with some strands worn as braids. He also sports a full goatee around his mouth.

Chōji was born into the Akimichi clan, and is slated to become the Sixteenth head of the Akimichi after his father, Chōza. When Chōji was a child, he was often put down for not being good at a child's game called "Ninja", which appears to be a cross between tag and hide and seek, often employing the use of shuriken made out of cardboard and sticks. His peers would always berate him, telling him that any team that he was on was bound to lose. One day, they simply refused to let him play at all. However, Shikamaru Nara stuck up for him, saying that the teams would be uneven if Chōji didn't join them. This gave Chōji a little hope, although, in the end, they still refused to let him play.

Chōji and his father were later seen talking on the roof of a building while Chōji was still upset over the way he was treated by the other children, saying the Akimichi were all fat and stupid. Comforting him, his father told him that few people have a heart as kind and caring as his, and one day he would meet someone who would see that in him and respect him for it, and that eventually they would be the best of friends. Soon after, Shikamaru arrived. Chōji recognised him as the one who had defended him earlier, and asked Shikamaru why he wasn't playing the game, to which Shikamaru responded that it was too troublesome. He then told Chōji that he liked to come up there to watch the clouds and that Chōji happened to be sitting in his spot. Chōji moved over to give him space. Shikamaru proceeded to lie down before telling Chōji that he should watch the clouds with him. This delighted Chōji, and he eagerly asked Shikamaru if he wanted to eat some snacks that he had brought. Shikamaru took him up on the offer, causing Chōji to be overjoyed, and then Shikamaru said "This is the best, watching clouds and eating chips". From that day on, the two became best friends.

During Chōji's time at the Academy, he was often caught eating in class otherwise getting into trouble along with fellow deviants Shikamaru, Kiba Inuzuka, and Naruto Uzumaki. Together, these four would cut class or otherwise be testing the patience of Iruka Umino, their Academy teacher. During the Search for Tsunade, when Naruto was struggling to learn the second step of training for the Rasengan, he recalled how once, during his days in the Academy, he, along with Shikamaru, Kiba, and Naruto were held back in class, and lectured about their all around lack in concentration — in Chōji's case, he was thinking more about food than about doing his school work. During the arc involving the trap master Gennō from the long-gone Kagerō Village, it was mentioned how Shikamaru, Chōji, Kiba, and Naruto would skip class together and hang out at the kunai practice course, which was situated under the Academy, to hide from Iruka. 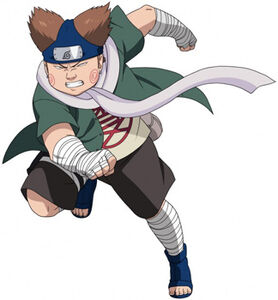 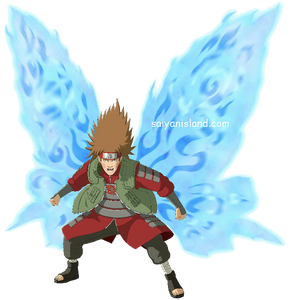 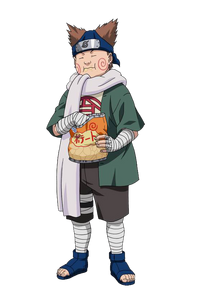 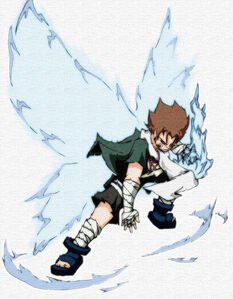 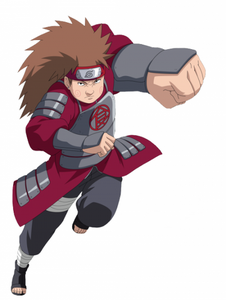 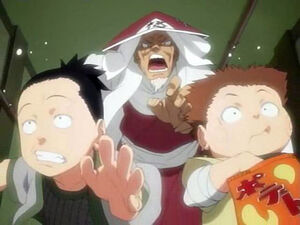 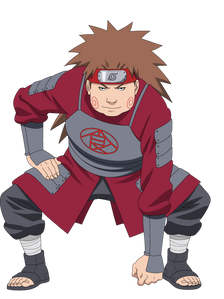 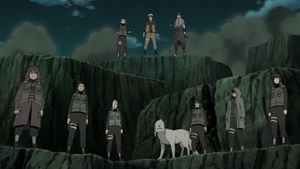 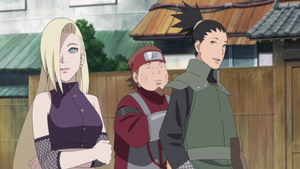 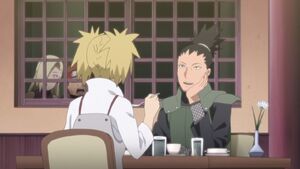