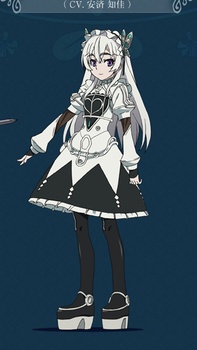 Chaika Trabant (Gaz) is a 14 year old sorceress who runs into Toru Acura and picks him up as a traveling companion, along with his sister Akari Acura. Chaika is a mage who carries a giant coffin around with her. She excels in high-precision spells, and she's also sensitive about the thickness of her eyebrows.

As she was lost for three days in the mountains, while trying to go to Delsorant to take one of Arthur Gaz's remains being held by Roberto Abarth, she met a young man. Chaika at first tries to get away but ends up back to the young man. She accused him of being a bandit going to attack her but he tells her he wasn't and was just foraging for food since he was broke. He offered to show her to town if she would pay him breakfast.

After clearing the misunderstanding between them, they were attacked by unicorn feila. The young man takes her and both of them off a cliff and into a river to get away. They both clung onto the coffin Chaika was carrying downstream. They later arrived on a riverbank, where Chaika sees that the young man was injured and tried to find medical supplies in her coffin to help him but couldn't. He mulls over on giving up but Chaika convinces him not to and to find new purpose. They then agreed to fight the unicorn in order to survive. As Chaika chanted her spell, the young man fought the unicorn. Chaika delivered the fatal blow with her spell "The Ripper", bifurcating the unicorn down the middle. After the fight they told each other their names; the young man was Toru Acura and she tells him she is Chaika Trabant.

She has long white hair that reaches down to her waist and large purple eyes. She wears a slightly frilly white dress with a black skirt with puffed sleeves and a frilled white headband. She has camouflage sleepwear that she made herself which she used during her travels before she met the Acura siblings. She also has a scar around her neck that looks like her head was chopped off. Her most distinctive characteristic is, without a doubt, her thick black eyebrows.

Chaika Gaz is shown to be innocent in the anime as she is very oblivious to the dangers around her and she has a very bad sense of direction. She has manners and is very careful to praise people. She is also quick to observe the situation and is very caring. She doesn't like resorting to violence and is obsessed with her goal to find the scattered remains of her 'father' Arthur Gaz. Her way of speech is not in full sentences and is grammatically inaccurate, She is also kind to animals and is a very optimistic girl although she seems lonely, and empty in the anime before meeting her companions and having friends. She is loyal and cherishes her friends. She also has a memory gap. In the second season she is shown to be more fierce to her usual character and more protective and caring of her friends and new companions she makes along the way. Her grammar and speech also improve and her big heart and kind intentions bring people closer to her and she gives out an aura of friendliness. She easily goes with the flow and usually accepts the situation of how things have turned out as long as no one is harmed.

Retrieved from "https://hero.fandom.com/wiki/Chaika_Trabant?oldid=1783595"
Community content is available under CC-BY-SA unless otherwise noted.