The Hammer of Ryloth

Fighting for Ryloth.
Being with Hera

Cham Syndulla is the leader of the Twi'lek Resistance and Hera's father in the Star Wars series. He dedicated his life to being a resistance fighter and revolutionary leader during the Clone Wars and the early days of the rebellion against the Galactic Empire.

Once having a stained relationship with Hera, father and daughter reconciled after his daughter convinced him to become an ally of the Rebellion.

He first appeared in the "Ryloth" arc in Star Wars: The Clone Wars and later, season 2 and 3 of Star Wars Rebels.

As a member of Ryloth's nobility, Cham opposed the policies of the Galactic Republic and Ryloth's senator Orn Free Taa. When the Clone Wars began and the Separatists invaded his world, Cham formed a group of freedom fighters to combat the invading droid army. When the Republic came to Ryloth to free the world from the Separatists, he formed an alliance with Jedi Master Mace Windu and his Clone Troopers to liberate the capital city of Lessu. The liberation of Lessu ended the battle for Ryloth and saw the capture of Separatist leader Wat Tambor.

After the Clone Wars ended, the Republic was replaced by the Galactic Empire and Ryloth was occupied by the new government who planned to use its resources for its own military production. Cham opposed the Imperial presence on Ryloth and formed a new group of freedom fighters to disrupt Imperial military targets in the system. When his wife was killed during the resistance, Ryloth's freedom became more important to him than his own family. His relationship with his daughter became difficult when she left to join the Rebellion against the Empire. Despite having ignored her, he preferred to have Hera by his side in Ryloth's fight for liberation rather than fighting offworld.

Cham's relationship with his daughter become a difficult one, especially when she chose to leave and fight in the Rebellion against the Empire. For several years they hardly stayed in touch, but were reluctantly brought together again for a mission to steal an Imperial carrier and use it to house the Rebellion's starfighter. However, Cham had other plans for the carrier. He wanted to destroy it to symbolise the strength of Ryloth and his people. Accompanied by two of his best warriors, Numa and Gobi Glie, they were successful in boarding the carrier with help from the Rebels. He turned against them and proceeded with his plans to destroy the ship, only to be stopped by Hera. Listening to his daughter's wise words of how he became an inspiration to both her and their people, Cham abandoned his plan and assisted the Rebels in getting the carrier to the Rebellion. Following their victory, Cham showed new loyalty and respect for the Rebellion and for his daughter.

Two years before the Battle of Yavin, Hera returned to Ryloth to assist her father, saving Cham and Numa when they were being chased by a Scout Trooper, who found himself corned by Cham, Numa and Zeb. Cham informed the Ghost crew of the occupation of Ryloth and of his foe, Captain Slavin, whose attacks on Cham were once clumsy but had become improved due to Grand Admiral Thrawn's interference. He told Hera he was unable to retrieve the Kalikori that belonged to their family. Hera decided to reclaim it because it was important to her mother, and Cham offered to help reclaim the relic that was precious to his wife. Cham and the rebels provided the distraction as Hera and Ezra made their way to Hera's home, the Tann Province. The rebels were soon cornered by stormtroopers. Amidst the fighting, Cham and the rebels were contacted By Slavin, who revealed that he held Hera and Ezra hostage and threatened to execute them if Cham did not turn himself in. Motivated by his love for Hera, Cham agreed, but in exchange for his daughter and Ezra's freedom. The next morning, as the prisoner exchange happened, Hera apologized to her father before she had Chopper set off the explosives he rigged around the house. The explosion was a large enough distraction that Cham, Ezra, and Hera could escape on the Ghost. In the aftermath, Cham knew never to underestimate Hera, unlike the Empire. Despite Hera never being able to get her Kalikori back. she knew that having her father, Kanan and family would be enough to keep her mother's spirit alive. 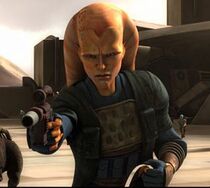