El Chapulín Colorado is the main protagonist of the Mexican superhero series, El Chapulín Colorado. Bolaños created Chapulín as an antithesis of typical comic book superheroes like Superman or Batman, instead building the character on his own vision of what a true hero should be. Chapulín is ugly, weak, clumsy, timid and cowardly, however he is honest and well meaning, doing what he can to help people against all odds.

He was portrayed by the late Roberto Gomez Bolaños, who also created the character and wrote the show.

Chapulín is a costumed superhero, described in tge show's intro as being "More agile than a turtle, stronger than a mouse, nobler than a lettuce, and his coat of arms is a heart". Chapulín Colorado is his actual name; as revealed in a late episode, his father was a entomologist, naming him after one of his favourite insects.

Though he has no real superpowers or any fighting abilities (in fact he's really just a normal guy in a costume), he has an assortment of equipment which he uses on his adventures. Those were created by an old scientist who gave them to Chapulín after recognizing him as the most honest person he had met.

Chapulín is a very known hero throughout the world. In each episode, people recognizes Chapulín wherever he appeared (even on the planet Venus), believing him to be a great superhero. Recognition caused him to boast, only to stumble and fall right away, proving himself to be puny and timid, and disappointing his fans. Despite this, Chapulín tries his best to help, and all his adventures ended well (though sometimes by sheer good luck or outside help.)

Chapulín is a hero of undetermined geographic and temporal location: his adventures could unfold in the American Old West, in ancient China, in London, in the Swiss Alps, during the Spanish Inquisition, in pirate ships, in Nazi Germany or outer space, and his enemies range from the Yeti to Egyptian mummies, including his interaction, in some occasions, with literary characters such as Romeo and Juliet ("Juleo y Rumieta", or literally "Juleo and Rumiet"). Chapulín can just appear anytime, anywhere, whenever someone calls for him. 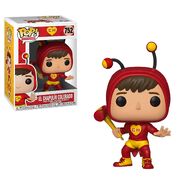 Chapulin's Funko Pop!.
Add a photo to this gallery

Retrieved from "https://hero.fandom.com/wiki/Chapul%C3%ADn_Colorado?oldid=1924569"
Community content is available under CC-BY-SA unless otherwise noted.