Charle/Sharuru is a rabbit-like fairy mascot, one of the four main mascots in DokiDoki! Pretty Cure. She has a passionate heart and always works hard, much like her partner, Cure Heart. She ends her sentences with "~sharu!".

She is voiced by Kumiko Nishihara in the Japanese version, and by Tara Sands in the English version.

Sharuru has a passionate heart and always works hard.

Sharuru has pink fur in different shades, and two rabbit-like ears. The top half of her ears are light pink, while the bottom half is magenta, with the separation resembling the top half of a heart. Her eyes are deep pink, with eyelash-like markings. Her tail resembles a rabbit's. She wears a petal collar with 4 petals on the front. She also wears a large pink ribbon on her head, decorated with heart markings and a silver heart medallion.

Sharuru has the rare ability to fly, turn into a Commune and help Mana transform into Cure Heart. 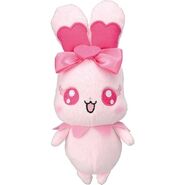