Charlie is a supporting character of Finding Dory.

Charlie is square shaped, with fat but short dorsal fins. His eyes are lavender, his eyelids are slightly darker, and he has the least amount of black on his scales in his family. Just like his wife and daughter, he has slightly bucked flat teeth.

Charlie is very silly and happy, calling his daughter by fun little nicknames, cracking jokes, and coming up with fun rhymes for his daughter to remember important things. He is also very helpful and kind, helping his daughter retrieve shells and comforting his family when needed. He is shown to be protective, holding his daughter away from danger and shielding his wife. He is also shown to be a bit forgetful by Jenny having to sometimes finish his sentences and remind him of something. It's possible he may have had short-term memory loss as a child before slowly growing out of it, unlike his daughter. 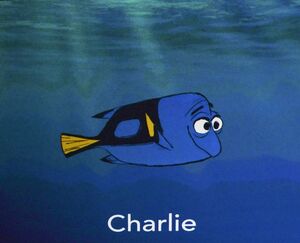