Win the chocolate factory and make Willy Wonka be part of his family (succeeded).

Charlie and the Chocolate Factory

Charlie Bucket is a poor boy who lives near the Wonka Candy Company. The company's owner, Willy Wonka, has long closed his factory due to problems concerning industrial espionage that led him to fire all his employees, including Charlie's Grandpa Joe. Charlie's father, meanwhile, has recently been made redundant at work.

One day, Wonka announces a contest in which Golden Tickets have been placed in five random Wonka Bars worldwide, and the winners will receive a full tour of the factory as well as a lifetime supply of chocolate, while one will receive a special prize at the end of the tour. Wonka's sales subsequently skyrocket, and the first four tickets are found fairly quickly. The recipients are Augustus Gloop, a gluttonous German boy; Veruca Salt, a spoiled English girl; Violet Beauregarde, an arrogant gum chewer; and Mike Teavee, an ill-tempered television and video game addict. Charlie tries twice to find a ticket, but both bars come up empty. After overhearing that the final ticket was found in Russia, Charlie finds a ten-dollar note, and purchases a Wonka Bar at a news shop. At the exact moment it is revealed that the Russian ticket was forged, and Charlie discovers the real ticket inside the wrapper. Charlie receives monetary offers for the ticket, but after a pep talk from Grandpa George (who tells Charlie that "only a dummy" would give up an extremely rare Golden Ticket "for something as common as money"), decides to keep it and bring Grandpa Joe to accompany him on the factory tour.

Charlie and the other ticket holders are greeted outside the factory by Wonka, who then leads them into the facility. Individual character flaws cause four children to give into temptation, resulting in their elimination from the tour, while the Oompa-Loompas sing a song of morality after each elimination. During the tour, flashbacks reveal Wonka's troubled past; his father, a prominent dentist named Wilbur, strictly forbade Wonka from consuming candy due to the potential risk to his teeth, and also made Wonka wear uncomfortable braces. After sneaking over a piece of candy, Wonka was instantly hooked, and ran away from home to follow his dreams. When he returned, both his father and their house were gone. After the tour, the four children leave the factory with an exaggerated characteristic or deformity related to their elimination, while Charlie learns that Wonka, now approaching retirement, intended to find a worthy heir to his factory. Since Charlie was the "least rotten" of the five, Wonka invites Charlie to come live and work in the factory with him, on the condition that Charlie leave his family behind, just as Wonka did. Charlie declines, as his family is the most important thing in his life.

Charlie and his family live contently a while later; however, Wonka is too depressed to make candy the way he used to, causing his candy to sell poorly and his company to decline. He turns to Charlie for advice. Charlie decides to help Wonka confront and reconcile with his estranged father; Wonka finally realizes the value of family, while his father learns to accept his son for who he is, and not what he does. Afterward, Wonka allows Charlie and his family to move into the factory together.

Charlie and the Great Glass Elevator

After moving to the factory, Charlie and family board the flying Great Glass Elevator. The Elevator accidentally goes into orbit, and Mr. Wonka docks them at the Space Hotel USA. Their interception of the hotel is mistaken by approaching astronauts and hotel staff in a Commuter Capsule and listeners on Earth (including the President of the United States) as an act of space piracy and they are variously accused of being enemy agents, spies and aliens. Shortly after their arrival, they discover that the hotel has been overrun by dangerous, shape-changing alien monsters known as The Vermicious Knids. The Knids cannot resist showing off and reveal themselves by using the five hotel elevators (with one Knid in each of them) and spell out the word "SCRAM", giving the group time to evacuate. As the group leaves, a Knid follows the Great Glass Elevator and tries to break it open, but to no avail, which results in the Knid receiving a bruise on its backside and hungering for payback.

Meanwhile, with the Great Glass Elevator's passengers gone, the President allows the Commuter Capsule to dock with the Space Hotel. Upon entry by the astronauts and the Space Hotel staff, the Knids attack by eating fourteen of the staff, prompting an immediate evacuation by the rest of the group. The Great Glass Elevator comes back just in time to see the entire Knid infestation coming in on the attack, bashing the Commuter Capsule to the point where the retrorockets can't be fired to initiate immediate reentry and the communication antenna can't keep the astronauts in communication with the President. Charlie suggests towing the Commuter Capsule back to Earth, and, despite a last attempt by the Knids to tow the two craft away to their home planet Vermes, in the process the Knids are incinerated in Earth's atmosphere. Mr. Wonka releases the Commuter Capsule, while the Elevator crashes down through the roof of the chocolate factory.

Back in the chocolate factory, three of Charlie's grandparents refuse to leave their bed. Mr. Wonka gives them a rejuvenation formula called "Wonka-Vite". They take much more than they need, subtracting 80 years. Two become babies, but 78-year-old Grandma Georgina vanishes, having become "−2". Charlie and Mr. Wonka journey to "Minusland", where they track down Grandma Georgina's spirit. As she has no physical presence, Mr. Wonka sprays her with the opposite of "Wonka-Vite" - "Vita-Wonk" - in order to age her again. Mr. Wonka admits that it is not an accurate way to age a person, but the spray is the only way to dose "minuses". Upon leaving Minusland, they discover that Grandma Georgina is now 358 years old. Using cautious doses of Wonka-Vite and Vita-Wonk, the three grandparents are restored to their original ages.

Finally, the President of the United States invites the family and Mr. Wonka to the White House to thank them for their space rescue. The family and Wonka accepts the invitation (including the grandparents who finally agree to get out of their beds) and prepare to leave.

Despite being a stereotypical boy, Charlie is a noble, caring hero and one of the best in British literature. He lives with his parents and bedridden grandparents in a ramshackle home in England. Charlie is willing to do whatever it takes to help his family and keep them safe. He spends his days rummaging for chocolate and money, and when he unexpectedly gets the fifth golden ticket to explore a giant chocolate factory run by the eccentric Willy Wonka, he gets a chance to bring his family to a new life. Charlie goes to the factory with his dear Grandpa Joe and wows Willy Wonka with his generous heart, surpassing the first four prize-winning kids: The greedy and gluttonous Augustus Gloop, the spoiled and bratty Veruca Salt, the bad-mannered gum-chewer Violet Beaurigarde, and the arrogant, television-obsessed Mike Teevee. Charlie inherits Wonka's factory and brings joy to his family. 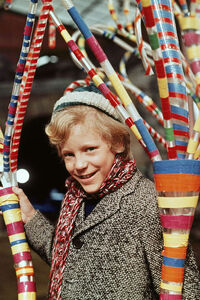 Peter Ostrum as Charlie Bucket in the 1971 version. 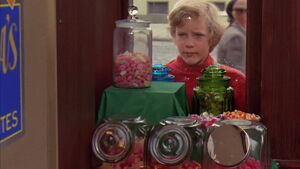 Charlie looking through the window of a candy store. 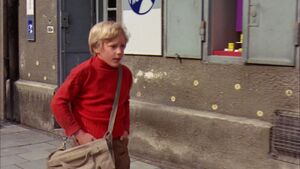 Charlie walking down the sidewalk. 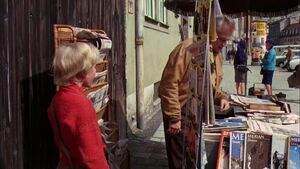 Charlie meeting with his boss at the newspaper stand. 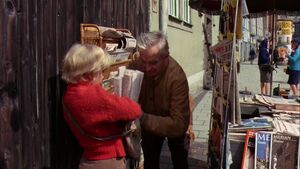 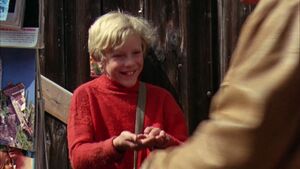 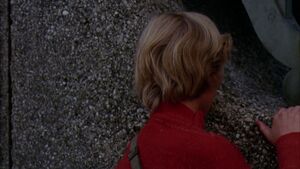 Charlie looking through the gates of Willy Wonka's factory. 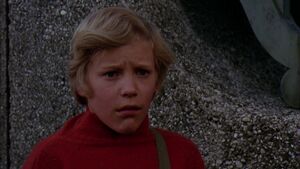 Charlie being told by a man that nobody ever comes in or out of Wonka's factory. 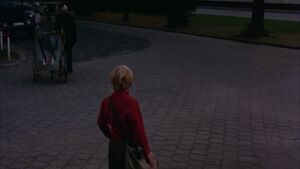 Charlie about to head home. 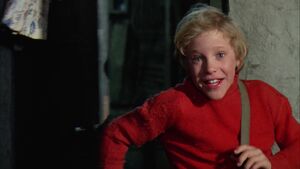 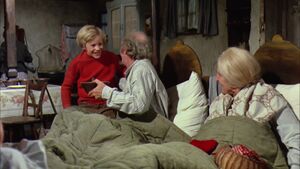 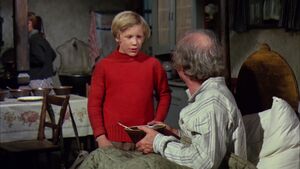 When Charlie is presented cabbage water for dinner, he expresses how tired he is of eating it. 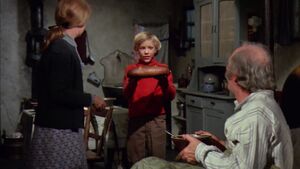 Charlie revealing to his family that he bought a loaf of bread with the money he's earned. 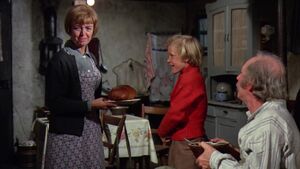 Charlie and his family planning to eat the loaf of bread. 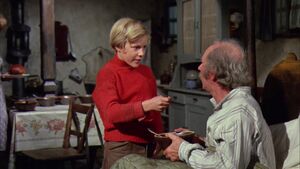 Charlie giving the remaining money to Grandpa Joe so he can buy some tobacco. 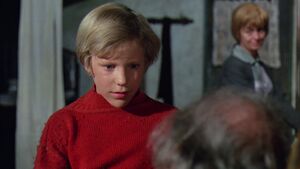 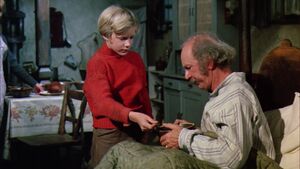 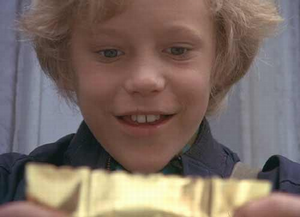 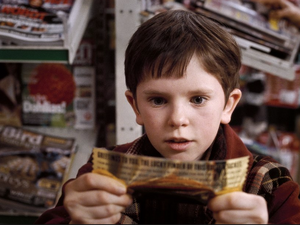 Freddie Highmore as Charlie Bucket in the 2005 version. 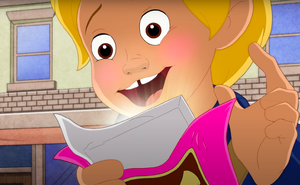 Charlie Bucket in Tom and Jerry: Willy Wonka and the Chocolate Factory.