Playing catch with his son, Kenny

Keep his family safe at any cost (succeeded)

Charles "Charlie" Michael Collins is an accountant who lived in Gotham estates but later moved to Springdale, Ohio. He was an unremarkable Gotham citizen until the terrible day that turned his life upside-down. He was voiced by Ed Begley, Jr.

Charlie was driving home from work on a particularly foul night. As he was driving home, a mysterious driver simply cut him off without using any signals. Angered, Charlie pulled up next to the driver and yelled at him, but upon realizing that the driver was none other than the Joker, he went quiet and drove off.

To his horror, he realized that the Joker was following him, so he tried to escape him by driving into the woods, but his car broke down. Upon getting out, the Joker caught up and reprimanded him for cursing at him, stating it was "simply not polite!" Charlie begged for his life, stating that he had a wife and a kid. Surprisingly, the Joker agreed to let him off if he did him a favor; only, the Joker did not know what he wanted yet. He promised to call when he needed his favor and took Charlie's license as identification. As a "hobby", the Joker decided not to call him right away.

Shortly after, Charlie moved to Springdale, Ohio and legally changed his name to Don Wallace. Two years later, the Joker decided to crash a party that Commissioner James Gordon and Bruce Wayne were attending and decided to cash in Charlie's "favor". Charlie was playing catch with his son, Kenny when he received the phone call, surprised that the Joker was able to keep tabs on him. Charlie was then escorted to the airport by the Joker's henchmen and flown to Gotham, where Harley then drove him to the Joker's hideout.

The Joker then revealed the favor: opening the front door of the party when Quinn knocks three times. At Gordon's party, Charlie slipped away into a small exhibit and used a makeshift bat signal to call Batman. Back at the party, Charlie opened the door for Quinn, but discovered that it was sprayed with an adhesive. Quinn wheeled in a giant cake that released noxious gas, though Quinn gave Charlie a gas mask. The Joker popped out, planted a bomb next to Gordon, and left Charlie for dead.

Just then, Batman finally arrived on the scene, threw the bomb out the window and into the Joker's getaway vehicle, and freed Charlie's hand. Batman then told Charlie to stay with the police as he chased after the Joker and his henchmen. The Joker escaped into an alley, but Charlie confronted him and threatened him with one of his own bombs. The Joker called for Batman's help, but Charlie still refused to give up the bomb, stating that murder-suicide was the only way to ensure his family's safety. The Joker then finally broke and surrendered all of his information on Charlie's family. Charlie then revealed that the bomb was a fake as the Joker was arrested. Charlie then walked off, learning to appreciate his bland life. 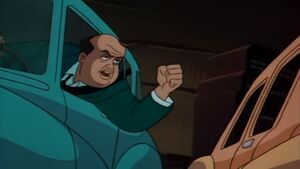 Charlie yells at the Joker for cutting him off. 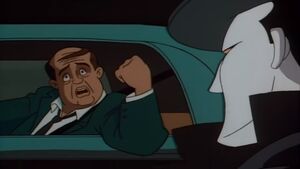 Charlie realizes he just cussed out the Joker. 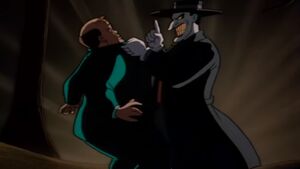 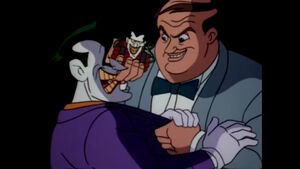