Spending time with his family and helping kids at his business

He was portrayed by Eddie Murphy in the first film and Cuba Gooding Jr.in the sequel.

Charlie is Ben's dad for about 5 years and he got married in Sansaw, America with Kim Hinton, she was marvelous to him and he was doing rocket ship with Ben Hinton his son and he loves working in the Daddy Day Care Centre and he use to work in a cereal company but he went went his favourite friend Phil Ryerson.

Charles "Charlie" Hinton is a food products marketing executive whose wife Kim has just gone back to work as a lawyer. They enroll their son Ben, in Chapman Academy, an expensive and very academic pre-school headed by a woman named Miss Harridan. Some time later, Charlie and his best friend, Phillip "Phil" Ryerson, are laid off due to the early 2000s recession. Unable to find either a suitable daycare or new employment, Charlie pulls Ben out of Chapman due to its cost and decides to open up a day care center in his home with the help of Phil, calling it Daddy Day Care. At first, the local parents are suspicious of men wanting to work with kids, but as Daddy Day Care is less expensive and more child-centered than Chapman Academy, the latter begins to lose students.

Unwilling to accept the presence of competition, Miss Harridan attempts to shut down Daddy Day Care by notifying child services that Charlie and Phil are not following the relevant regulations. Mr. Dan Kubitz, a director of child services, notifies them of the codes that they need to fix, which Charlie and Phil quickly correct. Mr. Kubitz then informs Phil and Charlie that they need another employee to keep an appropriate ratio of children to caregivers. Luckily, Marvin, a nerdy former co-worker, had dropped by and after seeing how good he is at entertaining the children, Phil and Charlie ask him about joining. Marvin is unsure at first, but then finds himself falling for Kelli, the single mother of Dylan (one of the kids in the daycare) and agrees. Daddy Day Care grows in popularity and attracts more children and parents. Charlie, Phil and Marvin each begin enjoying running Daddy Day Care and taking care of the kids, while bonding with them and helping them overcome their issues

Later, Mr. Kubitz tells them they have too many kids for Daddy Day Care to legally continue to operate at Charlie's residence. Marvin tells Charlie and Phil about an available building with potential, but they do not have the money to buy it. They hold a fundraising event called "Rock for Daddy Day Care", which Miss Harridan finds out about. She and her assistant Jenny infiltrate the festival and sabotage everything by unplugging a bouncy castle, filling the food with cockroaches, switching face paint with glue, releasing animals from the petting zoo, and bribing the groundskeeper into turning on the park sprinklers. As a result, Daddy Day Care does not raise enough money. Shortly after, Charlie and Phil are offered their old jobs back, accepting Miss Harridan's offer to take the kids back to the academy at a lower cost. Marvin, heartbroken by the closing of the day care, declines Charlie and Phil's offer to be on board their marketing panel.

Back at the advertising agency, Charlie and Phil's first assignment is to market a sugary breakfast cereal to children. While listening to a cereal pitch, Charlie realizes the impact Daddy Day Care has had on Ben and the other children and starts to question the morality of his assignment. He quits his job at the advertising agency and convinces Phil to quit with him. He and Phil pick up Marvin before heading off to Chapman Academy. Charlie confronts Harridan, claiming she doesn't care about what children want. Listing examples of how he has helped the children improve, Charlie successfully convinces the children's parents to bring their children back to Daddy Day Care, making it a raging success, and causing Chapman Academy to shut down for good. Marvin is now in a relationship with Kelli, Miss Harridan ends up becoming a school crossing guard, and Jenny joins Daddy Day Care at the new facility. The film ends as Herriden is then ambushed by a swarm of bees (due to a flower Crispin placed on her vest).

Four years after the events of Daddy Day Care, Charlie and Phil take their kids to Camp Driftwood, a camp they attended as kids. But once there, they discover that Camp Driftwood is no longer the kindhearted camp site of their time. To save the run-down site, Charlie and Phil buy a partnership from the older man that ran it when they were children, after the other partner runs off on vacation. They turn it into Daddy Day Camp. They run into misadventures along the way when the owner, Lance Warner, in the rival camp Canola tries to tear it down. The first day of camp turns out to be a disaster involving a skunk and a bathroom explosion, which leaves them left with only 7 campers instead of the original 35 and in need of help to improve their financial situation.

The next day, the camp is raided by Camp Canola, which has been joined by the 28 campers who left Camp Driftwood. Charlie calls his military father, Colonel Buck Hinton, for help to whip the kids into shape, since they have problems following orders. After getting revenge on Lance for getting his campers to steal the Camp Driftwood flag, he then challenges Camp Driftwood to the Camp Olympian but the kids have to train for it. The kids love Buck because of his military ways and support, However, Charlie disapproves as he recounts that he doesn't want the kids to become like Buck because Charlie believes that Buck only cares about toughness and that he, Charlie, was a disappointment to him. He starts to regret his decision to call Buck when his son runs off to the woods, after some campers tease him about his father's over-protectiveness, because his grandpa Buck told him that he became 'tough' when he ran off to the woods. They find him but when Charlie complains to Phil about Buck, Buck overhears their conversation and leaves camp.

On the day of the Olympian, the others find out that Buck has left. Seeing the kids discouraged, Charlie goes to find Buck and bring him back. He finds Buck and resolves all his problems with his dad. When they return the kids report that they found out that the rival camp has cheated in the Olympiad, and have been doing so for several past years; this is especially true when it's revealed that Charlie lost to Lance when they were kids. Charlie lets Ben do the climbing course, since Ben knows how to climb, but he falls. However, Becca tells everyone that Lance greased the wall, making everyone realize that Lance cheated in every game in the Olympian. While climbing a wall, Ben uses the tree next to it with enough time left to hit the bell giving Camp Driftwood the win. 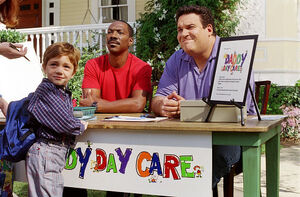 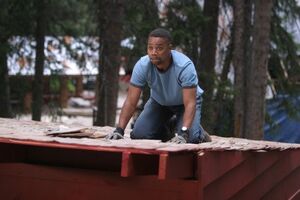 Cuba Gooding Jr. as Charlie Hinton in the sequel. 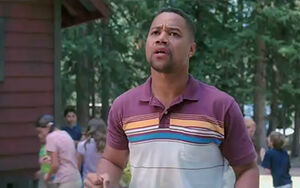 Add a photo to this gallery
Retrieved from "https://hero.fandom.com/wiki/Charlie_Hinton?oldid=1843207"
Community content is available under CC-BY-SA unless otherwise noted.