Before revival: Take down Shadaloo and maintain justice

After revival: Kill M. Bison no matter what

Charlie Nash, usually known as Charlie in foreign regions or Nash in Japan, is a fighting game character from Street Fighter series, presumably Street Fighter Alpha. Charlie is also Guile's best friend and the First Lieutenant of the United States Marine Corps, particularly flying with VTOL Harrier and fight for justice together in case of Shadaloo's criminal activities.

Although Charlie was first introduced as a playable character in Street Fighter Alpha he has been part of the series backstory since Street Fighter 2 where he was introduced as Guile's deceased war buddy. Guile's reason for entering the second world warrior tournament was to avenge Charles death at the hands of M.Bison.

Charlie defeats Bison and interrogates him over his connections with the top brass. Suddenly, Charlie's backup helicopter turns on him and riddles him with bullets. He falls losing his dog tags. When Shadaloo troopers wish to confirm the death, Bison assures that Charlie did not survive the fall.

Charlie has calm and confident personality with a strong sense of justice. His behavior akin to his best friend Guile is crime fighting, though more righteous than vengeance, even he acts recklessly sometimes. For a normal form, while he's normally acting in a pro manner, he lets emotions get better at times.

When Charlie revives in the fifth game of the main series, his personality has changed into a drastic form for unknown reason instead of calm, cool and drastic paragon of justice from his origin in Alpha series. However, Charlie has driven his hope in defeating M. Bison. Consumed with an obsessive needy, Charlie is currently ruthless to his friends and foes alike, like for example, he tells Alex not to fight him if not prepared for death.

In the other hand, Charlie is less forgiving to judge Cammy as being guilty as his mortal enemy M. Bison for becoming his slave, whereas during their encounter in Street Fighter Alpha 3, he considers her a victim of M. Bison's incidental plan. Charlie considers existence of Birdie useless, which can be called his encounter "idiotic pig" and asking why he's still alive, although Birdie is formerly a part of Shadaloo at the event of the fifth main entry. However, he still has his calmer personality from the past, remembering his friends Guile, Chun-Li and Cammy being a similar example.

Charlie appears in Super Smash Bros. Ultimate as a advanced-ranked support spirit that equip the user a Death's scythe. His spirit battle is a stamina battle against Captain Falcon who turn metal at high damage on the ship deck portion of Halberd with reduced jump power. 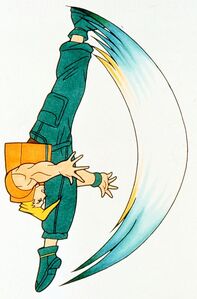 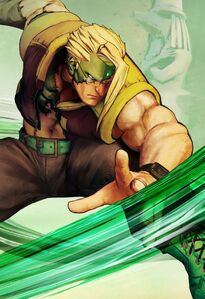 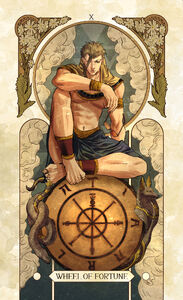 Charlie on a tarot card (courtesy of Capcom artwork collection)