Charlie Watson is the deuteragonist of the 2018 science fiction film Bumblebee. She is a teenage human girl who comes across a yellow Volkswagon Beetle, she purchases it as her first car, later learning that it is a disguised alien robot known as Bumblebee.

She is portrayed by Hailee Steinfeld, who also portrayed Mattie Ross in the remake of True Grit, Emily Junk in the Pitch Perfect series, Gwen Stacy/Spider-Gwen in Spider-Man: Into the Spider-Verse which was released on the same year as the movie, and Kate Bishop from the 2021 Marvel Cinematic Universe series Hawkeye.

Charlie Watson is a young woman living in Brighton Falls, California. In her youth, Charlie was a part of her high school's dive team, an activity that she excelled at, winning several trophies. She had a close relationship with her father, who would often join her and film her dive meets. They also shared a taste in music and worked on trying to repair a corvette. When her father died unexpectedly, Charlie took it very hard. She withdrew from the dive team since it evoked painful memories. When her mother met a new man and started a new relationship, Charlie withdrew into her grief further and resented the fact that her mother had seemingly forgotten her father and moved on. Charlie tried to keep her father alive in her mind by trying to fix the corvette, feeling that one some level that if she fixed it maybe her father would come back to. Using money from her job selling hot dogs at Brighton Falls boardwalk, she would buy parts from Hank's Marine Repair and Parts.

The day before turning eighteen, Charlie spent the day working at the boardwalk where she accidentally managed to spill drinks over her popular classmate, Tripp Summers. Because of her clumsiness, she was forced to endure the mocking of Tripp's girlfriend, Tina, and her friends. After work, Charlie went to Hank's to strip out parts to use on the corvette. During her visit there, she uncovered an abandoned yellow Volkswagen Beetle which piqued her attention. Taking her spare parts home, Charlie found that she was still unable to get the corvette running.

The next day was Charlie's eighteenth birthday. Instead of the car that she was hoping to get, Charlie's mother bought her a helmet for riding on her moped, while Ron gave her a book on how to smile more. In despair, Charlie headed down to Hank's and prepared to make him a deal to work for free if she could get the Volkswagen running. Hank instead told her that if she got it running, it was hers. Charlie spent several hours working on the car and eventually got it to run, much to Hank's surprise.

Taking the car back home, Charlie heard a piece of machinery fall from the bottom of the car. Investigating, she found the undercarriage to be strange and included a robotic face. Her attention triggered a transformation sequence, and the car transformed into a robot. After initially being scared of the robot, Charlie realized that he was also scared of her. He could not talk or remember anything, so Charlie took to calling him Bumblebee" due to the act that he couldn't speak and  could only make hums that sounded like a bumblebee flying.

The next morning, Charlie found Bumblebee missing and was told by Ron that her mother had used the car to take the family dog to the vet. Desperate to keep Bumblebee's secret, Charlie chased after her mother so that she could be around Bumblebee. She later took Bumblebee to the beach so that she could instruct him on how to hide and to only reveal himself when she was around. Charlie tried to fix Bumblebee's voice synthesizer but succeeded in playing a message from Optimus Prime that told her the robot was hiding from a civil war.

Back at her home, Charlie took the radio from the corvette and installed it in Bumblebee to teach him how to express himself using music. Their bonding session was interrupted by Charlie's new neighbor, Memo, who had come over with the intention of asking Charlie out on a date. Memo saw Bumblebee but Charlie managed to smooth over the situation and swore him to secrecy. Taking Memo on a car trip to show off what Bumblebee could do, they ended up at a cliff side party where Tripp decided to show off by diving into the sea below and dared anyone to join him. Bumblebee tried to push Charlie to join in but she could not bring herself to dive, the event bringing back painful memories. Walking off, Charlie was again taunted by Tina and her friends.

Charlie and Memo decide to get revenge by TPing and egging Tina's home, and enlist Bumblebee. However, he is unfamiliar with the concept and ends up wrecking Tina's car instead causing them to run before they are caught. On the way home, they are chased by a police car but Bumblebee ends up losing the cops. The next day, Charlie decides to leave Bumblebee at home in case the cops are on the lookout for the vehicle. However, while at work, she gets a call from Memo about a disturbance at her house.

Arriving home, Charlie finds that Bumblebee has somehow wrecked the inside of her house. Despite her best efforts to fix it, the damage is too extensive to conceal leading Charlie to argue with her mother and let some of her deep-seated feelings be known while her mother gives her some home truths as well. Charlie storms off with Memo in Bumblebee in an effort to cool down.

While driving, the trio are intercepted by Sector Seven agents. Initially, Charlie and Memo were willing to comply with Sector Seven's orders until their treatment of Charlie prompts Bumblebee to become protective and run off with Charlie. Sector Seven's new Decepticon allies, Shatter and Dropkick, arrive and help to subdue Bumblebee with electrical weaponry. Charlie is affected as well and is knocked unconscious.

Waking up back at home, Charlie finds Agent Jack Burns explaining to her mother and Ron that Charlie was in possession of an experimental government weapon. Charlie's attempts to tell the truth are shot down by her mother. Sent to her room, Charlie sneaks out and enlists Memo's help in trying to free Bumblebee. Caught by her brother, Otis, she convinces him to help them by covering for her absence with their family.

Charlie and Memo break into McKinnon Air Base. Finding Bumblebee being interrogated by Shatter and Dropkick, Charlie watches as they seemingly kill the Autobot and Dr. Powell after learning about Optimus Prime's plan to establish a base on Earth. Shatter and Dropkick plan to call reinforcements to Earth and lay a trap for Prime and the Autobots and leave to modify a nearby radio tower. Charlie uses one of Sector Seven's electrical weapons to revive Bumblebee, which also cures his faulty memory. When Burns arrives and grabs Charlie, Bumblebee goes into combat mode and deals with a Sector Seven force until Charlie manages to calm him down. Charlie and Bumblebee head off to the radio tower where Shatter and Dropkick are modifying the tech to call reinforcements.

Bumblebee attempts to keep Charlie out of danger by hiding her in a dumpster, she was forced from her hiding spot by Bumblebee's battle with Dropkick. Spying Shatter working on the radio tower, Charlie climbs the radio tower and removes a power source from the transmitter. Bumblebee wins the fight and destroys Dropkick. Shatter tries to kill Charlie and retrieve the power cell but the Decepticon is soon distracted by both Bumblebee and Agent Burns' arrival in a helicopter. Shatter gains the upper hand, but Bumblebee blows a hole in the wall of a drydock and floods the area. Shatter is killed by a large cargo ship crushing her but Bumblebee is knocked unconscious underwater. Charlie finally overcomes her reluctance to dive and manages to save Bumblebee. As more Sector Seven forces arrive, A redeemed Agent Burns tells them both to leave for their safety.

Charlie becomes aware that Bumblebee has a mission and cannot stay in her life. They bid a tearful farewell on a hill overlooking the Golden Gate Bridge. Bumblebee uses his ability to adopt a new alt-mode—a Camaro—which surprises and annoys Charlie at the same time. He drives off, heading across the bridge in the company of a red and grey semicab and trailer. Back at her house, Charlie reunites with her family and Memo, and continues to work on the corvette. Finally, she gets the vehicle to work, much to her delight. 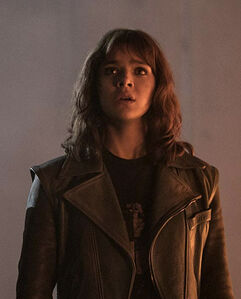 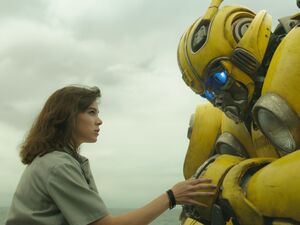 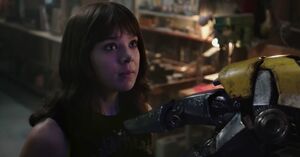 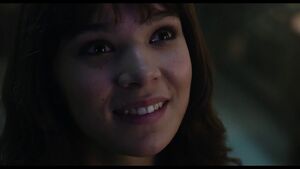 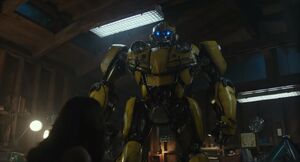 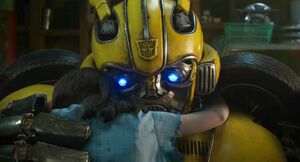 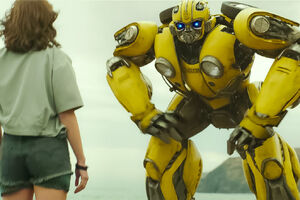 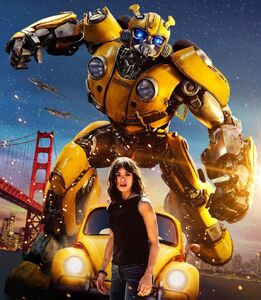