Charlotte Pickles
"CP" (by Dil in All Grown Up!)

"Aunt Charlotte" (by Tommy and Dil)

(Former CEO in All Grown Up!)

Skilled in Talking on her cell phone Intelligence

Talking on her cell phone, working

Businesswoman
Charlotte Pickles is one of the characters from Rugrats and All Grown Up. She is a very beautiful business woman and CEO (Chief Operating Officer) of her company who is married to Drew Pickles and the mother of the show's main antagonist Angelica. She is also the daughter-in law of Lou and Lulu Pickles as well as the sister-in law of Stu Pickles and the aunt of Tommy and Dil Pickles.

Aside from being Drew's wife and Angelica's mom, Charlotte is also the CEO of a major corporation called Mega Corp, and is overworked. Even though Charlotte usually doesn't have much time for Angelica, and usually spends most of her time on the phone or working, she really does love Angelica. Even though Charlotte, like Drew, spoils Angelica, she's not a pushover like Drew tends to be, and it's been implied (and shown) that when Charlotte's properly focused on her parenting, she's the more stern parent and capable of actually disciplining Angelica without hesitating to do so, whereas Drew has a tendency to hesitate when trying to discipline their daughter. It's implied that she's just a workaholic, she just never really pays total attention to what's going on with Angelica. 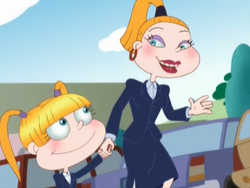 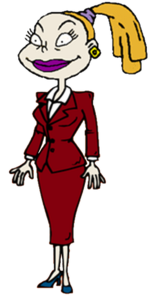 Charlotte All Grown Up 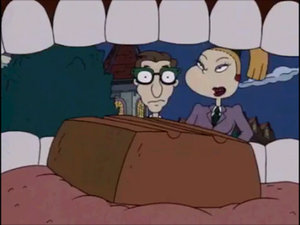 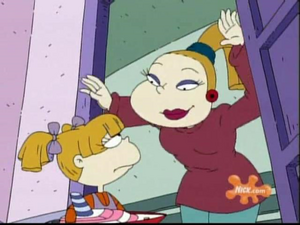 Retrieved from "https://hero.fandom.com/wiki/Charlotte_Pickles?oldid=1999169"
Community content is available under CC-BY-SA unless otherwise noted.