Working at the Continental Hotel

To take one of our guns to John Wick.

Charon is the concierge at the Continental Hotel's New York City establishment and deuteragonist, employed by Winston.

A recurring character in the John Wick movie series, Charon is often seen interacting with the eponymous protagonist in his position as the concierge of the hotel, offering John various services.

He was portrayed by Lance Reddick.

After John has to leave his dog behind, Charon admits that the hotel has no services for taking care of a dog, but he will do it personally for John.

After John kills Santino D'Antonio, Charon returns the dog to him and states that he enjoyed looking after him. Charon later escorts John to a meeting with Winston in Central Park and before saying goodbye, tells John that it has been a pleasure working with him and the two men shake hands.

In the third movie, Charon fights alongside John when the High Table attacks the Continental. Together, the men eliminate the strike team and Charon rejoins Winston to act as his bodyguard when Winston negotiates with The Adjudicator.

After Winston apparently betrays John to regain control of the hotel, shooting him and sending him off the hotel roof, Charon compliments his boss on the move being "well played."

He deeply respects John, as seen that he was willing to look after his dog while he was out of the country, even though it was against Continental rules. Before John is going to be hunted by every assassin in the world, Charon tells him that it was a genuine pleasure to know and work with John. 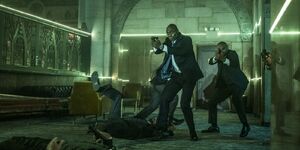 Retrieved from "https://hero.fandom.com/wiki/Charon?oldid=1931666"
Community content is available under CC-BY-SA unless otherwise noted.