Chase is the deturagonist from the Nick, Jr. show PAW Patrol. Chase is a German Shepherd pup, his occupation for the patrol is being second-in-command, a police and super-spy pup, and he has a megaphone for whenever he needs to use it (in the movie, he is the leader of the team, with his super speed and leadership skills).

In Season 1 of the North American version, Chase is voiced by Tristan Samuel, and Max Calinescu took the role for Season 2 and onward. At the beginning of Season 5, Calinescu was replaced by Justin Paul Kelly. In the British version, he is voiced by Hayden Hunter throughout all seasons.

Chase is a German Shepherd puppy with brown fur, lighter brown fur on his face and paws, and brown eyes. His tail is long and resembles that of a beaver. As a Mighty Pup in Thunder Bay, he wears a blue cowboy hat with a sheriff badge on it. In Adventure Bay, he wears a dark blue police vest, which three yellow chevrons on either side, and a dark blue police hat with yellow trim, a black bill, and a silver PAW Patrol logo on the front. His Super-Spy attire consists of a blue helmet (which also has a retractable visor), vest, and shoes, which all have lime green trimming. His Pup Tag in the movie is an icon of Sonic the Hedgehog, while in the series it is blue and has a yellow star badge on it.

As a police pup, Chase is probably the most mature member of the PAW Patrol and always tries his best to stay serious when on a mission, but sometimes lets his emotions slip through. When off-duty, he also has a playful side. He and Marshall are best friends and often playfully compete with each other.

Like all PAW Patrol members, Chase has a Pup Tag that he can use to make calls to Ryder, The Lookout, and his fellow members, as well as make video calls to said members. The Mission PAW version of his Pup Tag has a GPS that can be used to track his location and a video camera.

Chase's normal vehicle is a police car that contains traffic cones and a winch. Its number is 02. In season 2, Chase received a Super Spy vehicle along with his Super Spy gear. This vehicle has an ejector seat, a spy drone, a winch, and off-road wheels. It also has a computer and satellite dish that are used to control the spy drone. His Mission PAW vehicle is a three-wheeled motorcycle that comes equipped with a landing pad. His Sea Patrol vehicle is a patrol boat equipped with a megaphone and winch. It also has a land mode.

Chase has an extremely strong sense of smell which he can use to track down anything, but, in the series, his allergies to cats and feathers sometimes cause his trouble. He has been shown to be able to speak with beavers and owls. 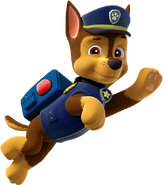 Retrieved from "https://hero.fandom.com/wiki/Chase_(PAW_Patrol)?oldid=2185408"
Community content is available under CC-BY-SA unless otherwise noted.