Listening to music
Disturbing the other rangers

Defeat Sledge and protect the Energem (Both succeeded)

Protector
Chase Randall is one of the members of Power Rangers Dino Charge. Possessed the Black Energem, he transform as Power Ranger Dino Charge Black. He is also the team's second-in-command.

Upon being given the Black Energem by a Maori fortune-teller named Moana, he was the first to be found and become a Dino Charge Ranger, followed by Koda soon after.

Born in New-Zealand, Chase Randall works at the Amber Beach Dinosaur Museum as a custodian/runner of sorts and assists Kendall Morgan in paleontological digs duty.

Some time after Kendall met Keeper, they tracked down Chase, who had found the Black Energem and bonded with the spirit of the Parasaurolophus, making him the first ever Dino Charge Ranger. Past, Present and Fusion It is later revealed that he was given the Black Energem by a fortune teller/curio shop owner from New Zealand as a reward for his bravery for rescuing her cat.

After the final battle against Sledge, Chase decides to travel back home to New Zealand, open for visitation from the other rangers if they wanted to One More Energem, but returned later on to fight Snide after the Rangers disband and then reunite.

Chase is a cool laid-back 18-year-old. He wears the right clothes, listens to popular music, always well coiffed. He's very handsome and receives a lot of attention from the girls. He gets around by riding a skateboard, while sporting a hoodie and headphones. He spends his free time diddling on a guitar. Chase is very forgetful and is always late, stopping to flirt with girls or responding to texts. 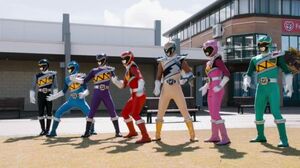 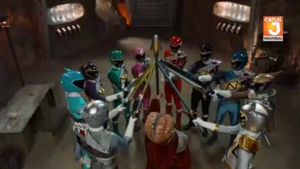