Chase Stein is one of the main protagonists in the Hulu TV series Runaways, and is the son of Victor and Janet Stein. Like the rest of the Runaways, he learns that his parents are sacrificing people and using PRIDE as a coverup, and attempts to stop them.

He is portrayed by Gregg Sulkin and Connor Falk younger. Sulkin also played Mason Greyback in Wizards of Waverly Place.

Chase Stein was born in Early 2001 to Victor and Janet Stein, with the former being the CEO and founder of Nemo Industrial. During his childhood, Chase became close friends with Alex Wilder, Karolina Dean, Gert Yorkes, Nico Minoru, Amy Minoru, and Molly Hernandez, who were the children of PRIDE members, an organization Chase's parents were part of.

While growing up, Chase resented his father, who was abusive towards him and his mother, and focused on his work than anything else. In addition, Chase became a gifted athlete, and would win multiple championships, but his father would fail to come, and one event led Victor into punching Chase for talking back to him.

Chase attended the Atlas Academy alongside his friends, and was partners with Gert in astronomy during the eight grade. Gert had romantic feelings for Chase, but never revealed it, and watched Chase play Candy Crush and flirt with their classmate, Eiffel. Despite not being close to his father, Chase took Victor's gifted intelligence, and became a skilled engineer in his youth. Despite this, he was often shrugged off as being a dumb jock due to him joining the lacrosse team at Atlas Academy.

His relationship with his friends became strained when Amy Minoru suddenly passed away, and he touch with them before the series began. As a result, Chase spent more time with those who were popular, such as Eiffel, and his lacrosse teammates Brandon and Lucas.

After leaving from home to the academy, Alex invited Chase to come over to his mansion, but he refused, as he didn't want to hang out with his old friends. Chase attempted to get his grade in Spanish to be higher, but failed and hit a locker, which was noticed by Gert. Chase agreed to get help from Gert that day by meeting at the Timely Coffee, but his friends pressured him to a party that night.

Chase attended the party, but didn't enjoy at as others did, and attempted to meet with Karolina in the crowd. He saw her later being dragged unconscious by Brandon and Lucas, and fought them when they attempted to rape Karolina, making them run away. Chase and Karolina decided to go to Alex's mansion after receiving a picture of him with his former friends, where they met with Nico, Gert d Molly. The group argued after feeling Amy's absence, and Chase nearly left, but Karolina told the group that they needed to talk about Amy to move on.

Chase agreed to stay if he could get alcohol from Geoffrey Wilder's office, and the group accidently stumbled upon a secret passageway. The teenagers found themselves looking at their parents sacrificing Destiny Gonzalez, and the were forced to flee when Molly took a picture. The group hid in the guesthouse, and pretended playing Twister and acting like they did when they were close, eliminating any suspicion from their parents.

Chase talked to the group on what they saw, and believed that the box he saw Destiny be put in could be related to his father's work on time travel. However, he also could believe that his father was evil enough to be a murderer, and after returning home with his mother, received a text message from Alex. The next day, the group met up, and Chase, Alex, Gert, Nico and Molly didn't believe the message that Karolina received from Destiny that shew as in London.

Chase was tasked with searching through his father's lab for the Dematerialization Box, and accepted that Gert came with him, but also dismissed Karolina's concerns of him fighting Brandon and Lucas the night of the party. In the lab, the two found the box, and Chase used the X-Ray Specs to look into, and saw that Destiny was no longer in there. Chase believed their investigation was over, but Gert concluded that they go to her home to investigate, as Molly believed she saw a creature.

In the basement of Yorkes' home, the two came upon Old Lace, a small dinosaur that was hidden, and obeyed Gert's commands. Chase created a WizTalk to talk with his friends, and told them they should prepare to protect themselves if their parents are murderers, and worked on the fistigons. Many life changes began to happen in Chase's life, as he thought of leaving the lacrosse team after having another confrontation with Brandon and Lucas, who wanted him to apologize to them for hurting them. Chase later went to Karolina and told her of what Brandon and Lucas attempted to do, and Karolina thanked him by revealing her light powers to him.

After speaking and supporting with Karolina, Chase became more motivated to work on his fistigons. When his father entered the lab, Chase wanted to leave in fear of his father's reaction, but was surprised when his father asked what he called his invention, and wanted to help him. After his father left for a break, Chase picked up his phone to see that Gert attempted to call him, and learned that Alex was kidnapped. The teenagers met up and rescued Alex from Darius Davis, and Chase used his fistigons to knock him, and Nico used her staff to protect them.

After Darius ran away, the group met at the Timely Coffee, where Alex asked the group to help him save his kidnapper Andre Compton, who he believed was going to be sacrificed by PRIDE. The group agreed after revealing each other superhuman abilities, and found the sacrifice room empty, as PRIDE did the sacrifice somewhere else. In the room, Chase found a camera, and gave it to Alex so he could decrypt it, but Chase had come to believe that his parents had a reason for their actions. Chase returned home and his father worked on a time machine, but it failed, and his father revealed that he had brain cancer.

Chase worked with the Runaways to infiltrate Wizard headquarters to retrieve the video file while attending a gala, and Chase learned that his mother was having an affair with Nico's father, Robert. Chase also saw Karolina take a drink and go onto the roof, and watched her fall, but grabbed her bracelet before she did. To his surprise, Karolina could fly, and Chase kissed her, much to her concern. Unbeknownst to Chase, Gert held jealousy for his interest in Karolina, but Dean had romantic feelings for Nico. When his father fainted, Chase revealed to his mother and the rest of PRIDE that his father had a brain tumor, but he was taken care by a mysterious man named Jonah.

Chase reunited with Alex and Nico and learned their mission was a success, and told them of Janet and Robert's affair. Upon returning home with his family, and noticed his father's new yet weird behavior, and talked to his mother before going to school. At the academy, Chase meets with the others, and learns that Molly accidently revealed what they saw to Alex's mother, Catherine Wilder. When hearing the Wilder's and Yorkes' talking, Chase and Karolina realized they were talking about Molly, and had a meet with the other Runaways.

Upon returning home to the lab, Chase was confused with his father's harsh behavior, and became angered that he was tricked once again on having a father-son relationship with Victor. During the argument, Victor attempted to hit Chase, but he dodged the attack, and hit his father and immediately attempted to apologize. Victor attempted to kill his son, using the fistigons to knock Chase backward, but Janet shot him in the back.

The PRIDE members came and Chase went with his mother to share a drink, and later attempted to call Gert. Despite telling Karolina what happened, Chase changed his mind on her coming over, apologizing for involving her. Chase attempted to see his father, but was stopped by Frank Dean, but was convinced by Karolina to speak with Gert in his bedroom. Afterward, the group were informed that Alex succeeded in decrypting the file, and met up at the Timely Coffee. Chase got into an argument with the others on exposing PRIDE, as he believed that doing so would cause his father to die. Chase decided to destroy Alex's laptop and hard drive, and apologized to the group, as he felt it was the right thing to do.

The team nearly disbanded, but were brought together when Molly managed to return to Los Angeles from Montebello, and showed them her parents' tapes. On the tapes, the Hernandez's revealed that PRIDE were looking for something that could cause massive damage across California. The group decided to stop PRIDE at their construction site, and use the school dance to meet up. At the dance, Chase and Gert admit their feelings for each other and presumably have sex, and later stumble upon Karolina and Nico, who had just shared their first kiss.

The Runaways attempted to close the hole and stop PRIDE's drill, but were confronted by their parents, and refused to listen and declared war on their parents. Chase attempted to defeat PRIDE by using his fistigons, but Karolina told her friends to leave while she dealt with Jonah, but she was captured after being defeated. The Runaways hid in the woods and thought of their next plan, either leaving Los Angeles or going to rescue Karolina from PRIDE. The group decided on the latter, and Chase told Nico that he fallen deeply in love with Gert, as she told him that she was in love with Karolina.

The Runaways succeed in rescuing Karolina from PRIDE with the help of Vaughn Kaye, but were forced to go on the run when learning the have been accused of murdering Destiny Gonzalez and capturing Molly. 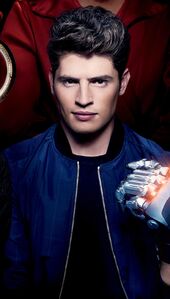 Chase on the season one poster. 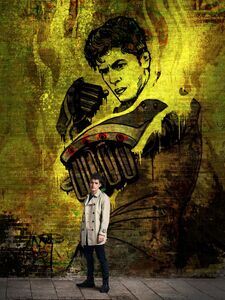 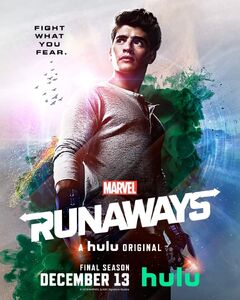 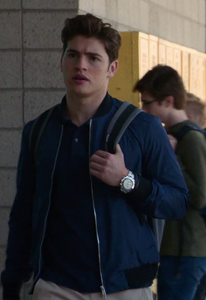 Chase in season one. 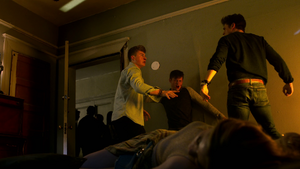 Chase fighting Brandon and Lucas, stopping them from rapping Karolina. 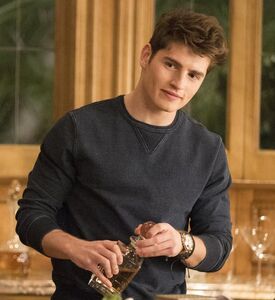 Chase at the Wilder mansion. 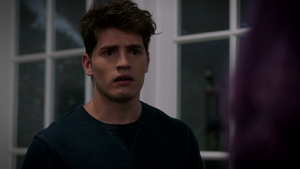 Chase speaks to the group after seeing the PRIDE sacrifice. 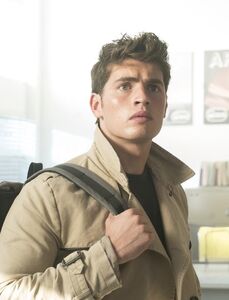 Chase in the season one finale, going on the run with the Runaways. 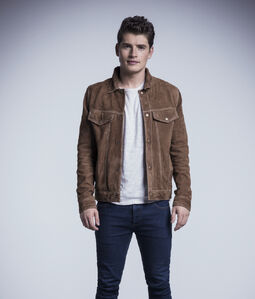 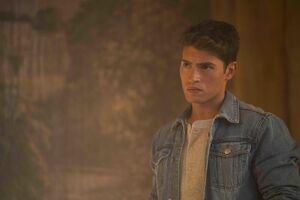 Screenshot of Chase in season three. 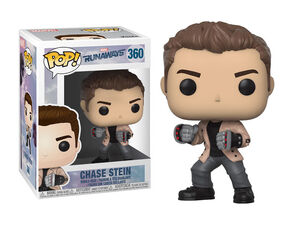