Play with Quico, Chilindrina and other best friends in the vicinity
Eating Jelly Sandwichs
Playing Balero
Playing Holding the broom with your feet and hands

Playing Baseball With the Broom
Playing The Ball

El Chavo del Ocho (in Portuguese: Chaves) is the titular protagonist of the TV series of the same name.

In the original TV series, he was portrayed by the late Roberto Gómez Bolaños, who also was the creator of said show.

El Chavo and Quico are generally best friends, although there is rivalry since Quico has money and Chavo is poor. Both friends count on each other when they need each other, and they almost always play together despite the constant fights they have because of nonsense. The tenants of the neighborhood say that the Chavo is very gross, but nobody denies the clumsiness of Quico and, no matter how much you try to find out, you never knew in its entirety which was more silly, as Chilindrina said.

Don Ramón always had a close and great affection for El Chavo, which could be said paternal, because the latter had no one in general with whom to share his orphanhood. However, Don Ramón was always there for him, although Chavo often took him out of his boxes for some mischief, joke or evil, which ended in a crust on his forehead by Don Ramón. However, many times Don Ramón takes advantage of "unintentionally" the Chavo, sending him to the store for any order of something he wanted, without giving anything in return. Don Ramón and El Chavo often share very pleasant moments, either with Don Ramón giving him toys or food, or Chavo himself sharing sandwiches and cake with him.

She takes Chavo very seriously, to the point of not wanting her son to join him, saying that he belongs to "the mob", and therefore doesn't like him very much. Doña Florinda almost always scolds him for his pranks. However, Doña Florinda really only kind of likes Chavo a little bit, demonstrating it when she invited him to sleep at her house or when she gave him a ham cake, even when she cried his "death" when she thought he had been run over.

Roberto Gómez Bolaños designed Chilindrina as a girl who had as many or more freckles as Chavo, by way of constituting an identification bond between them. Despite being a mischievous little girl, and several times a little smarter than Chavo, she is practically her best friend since she was a child. Chilindrina is deeply in love with El Chavo, and sometimes she takes it as a boyfriend, even if he doesn't like it or doesn't pay attention to it directly.

Although Chavo always receives him with a blow when he reaches the neighborhood, he has a great affection, being together with Don Ramón and Jaimito, who have done more for him throughout the program, even taking him to Acapulco with such of not being left alone in the neighborhood, and then to the movies.

Although the Chavo passes by calling her "witch", she has a lot of affection for him. Doña Cleotilde asks for favors like going to buy bread at the store, carrying water, etc. In almost all of these cases, he always tips him for his favors. In one episode, she gave Chavo and his friends palettes.

He loves Chavo very much, trying his best to learn something, but he can't stand it when Chavo tells him "Maestro Longaniza", "pipe pipe", "Maestro Jirafuchila", "standing kilometer", etc.

Ñoño and Chavo are good friends, although sometimes they fight. Even so, Chavo could never hit Ñoño, since when he approaches him to do it, Ñoño pushes him back with his belly, until Chavo surrenders and leaves it for another occasion.

Popis treats Chavo most of the time, except when he removes her doll and hits her. In the animated series, she is in love with Chavo (due to the absence of Chilindrina).

When the Chavo meets Patty, he immediately falls in love with her, which unleashes the jealousy of Chilindrina (in the original) or Popis (in the animated series). She has always treated him well.

Jaimito el Cartero is one of those who loves Chavo the most. A couple of times he took him to school or invited him to watch a football game at home, but sometimes Chavo caused him problems, and Jaimito ended up doing the same thing as Don Ramón: giving him a coscorrón. In the episode "El Cumpleaños de la Popis", the Chavo took the sandwiches prepared by Doña Florinda, to share them with Jaimito. One of the best moments they had was when Jaimito, seeing that everyone was abusing Chavo, forged a letter that was addressed to Chavo, in which he said that Chavo would receive a lot of money from a stranger, and dropped it on Doña Florinda's inn. When the others read it, they began to treat it well, until in the end Jaimito confesses that he wrote it, leaving as a moral that when you have nothing, everyone treats you badly, but when you have money, they are all your friends.

When Doña Nieves first arrived in the neighborhood in search of Chilindrina, she gets along very well with El Chavo and shows her a lot of affection and joy, but this sometimes caused her problems by hinting at her extreme old age, and Doña Nieves ended up doing the same as his grandson Don Ramón: give him a blow to his forehead. He has shown concern for him, to the point of organizing a demonstration in favor of his labor rights as an employee to obtain a minimum wage. In other episodes, the Chavo helped Doña Nieves to take the luggage to the house of Mr. Barriga, he has cleaned the windows of the house along with the Chilindrina, he has done favors in exchange for tips, he helped him find the Chilindrina , etc. Doña Nieves greatly appreciates Chavo, since she met him as a child and, according to her, carried him in his arms and even gave him a ham cake. 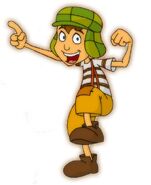 El Chavo in The Animated Series 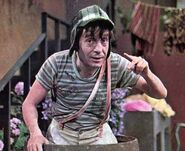 The cast of El Chavo posing for a picture in 1984.