Heroes Wiki
Register
Don't have an account?
Sign In
Advertisement
in: Pokémon Heroes, Rivals, Doctors and Scientists,
and 13 more

Cheren is a rival character in Pokémon Black and White, and a Gym Leader of Aspertia City's Gym, known officially as the Aspertia Gym in Pokémon Black 2 and White 2. He specializes in Normal-type Pokémon. He gives the Basic Badge to Trainers who defeat him.

Cheren is a tall, slender young man with very pale skin, black eyes, and jet-black hair with a small tuft that sticks up from the top of his head.

Cheren wears a blue coat and a white shirt with an orange Y-shaped pattern, a black belt with a silver clasp, black dress pants, and blue shoes. He sports spectacles with orange rims.

Cheren lives in Nuvema Town with the player and Bianca.

Cheren's starter will always have an advantage over the player's starter.

Cheren is one of player's friends who will be encountered on his/her journey and also battles him/her after the player defeats every gym leader. After the player receive the Freeze Badge, Cheren helps him/her beat Team Plasma in Dragonspiral Tower and gives useful tips. He is one of the characters who receives a starter as a present from Professor Juniper.

Since Bianca chose the Pokémon with a type disadvantage against the player character's, he has no other choice but to take the Pokémon with a type advantage, though he said he wanted that Pokémon from the start. He later reappears many times throughout the game to battle him/her, sometimes giving the items when the player defeat him. His goal, like many other previous rivals, is to become the Pokémon Champion. The player character will challenge Cheren right before entering Victory Road, and is then seen with Champion Alder before the character faces N, and Ghetsis.

After defeating N and Ghetsis, Cheren appears before his house, where he says that he is going to explore the region again, starting from Route 1.

He can later be seen outside of Nimbasa City, where he recalls the day that he met Alder, and how it was the start of his new look on becoming stronger. He then says he will go to the Pokémon League, where he will battle you, just like the old times. He will be waiting for you at the top of Victory Road where you can battle him again once a day.

Cheren reappears in Pokémon Black and White Version 2 as a Normal-type Gym Leader. He serves as a replacement for Lenora and will award the Basic Badge to challengers who defeat him. If you call him on the Xtransceiver, he will talk about the types your Pokémon are weak against and your Pokémon abilities.

Cheren appears in the anime as Aspertia City's Gym Leader. He is a friend of Ash Ketchum, Iris, and Cilan. His appearance is based on Cheren's appearance from Black 2 & White 2.

Cheren appeared in the animated trailer. He first appears in his gym with his Stoutland, where he battles against Rosa and her Serperior. 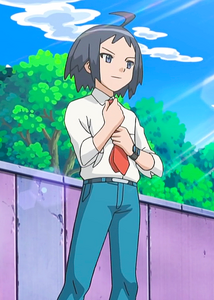 Cheren in the anime 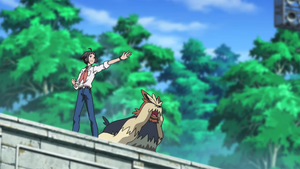 Cheren in the animated trailer